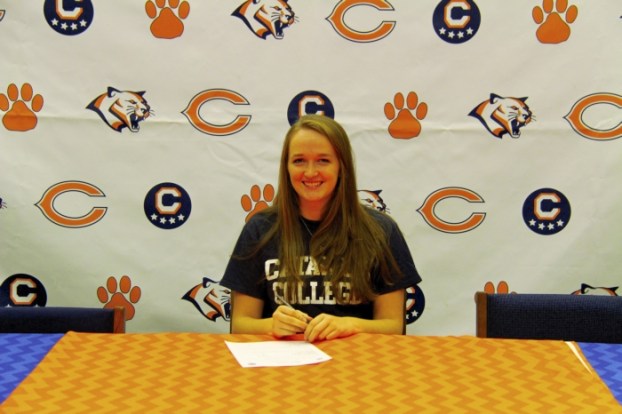 CHINA GROVE — When Carson High School volleyball standout Morgan Hester made her official visit to Catawba, she could’ve served as her own tour guide.
Hester knows Catawba as well as she knows her own living room.
Her father, Chip, now offensive coordinator at North Carolina A&T, was a Catawba football coach from 1995-2012 and head coach for 11 years. He had 70 wins as head coach to rank second in school history.
Morgan’s father became Catawba’s head coach when she was 4 years old, so she grew up cheering for the Indians and spending time at Shuford Stadium, Newman Park and Goodman Gym.
Morgan is familiar with many Catawba coaches, including long-time volleyball coach Ginger Hamric, so it wasn’t surprising that she decided to sign with the Indians.
“I always went to the camps at Catawba so I know Coach Hamric well and I really like the team,” Hester said.
Hester said the only other school she was really interested in was Furman, but that was too far away.
Hester’s biggest challenge in playing Division II volleyball is going to be height. She’s 5-foot-6.
“But that’s 5-6 with a high vertical,” Hester said with a smile.
She’s a good athlete, with part of that athletic ability coming from her father, a former Guilford wide receiver. Part of it also comes from her mother, Trish, who was a strong volleyball player at Guilford, while also playing some tennis and basketball.
Trish was actually Carson’s first volleyball coach, starting the program from scratch in 2006.
Athletics have been Morgan’s life. When she was 3 weeks old, she was strapped in a car seat on the bench of the North Rowan girls basketball team. That’s because her mother was the assistant coach.
Morgan had an outstanding career at Carson. She was part of super teams her freshman and sophomore years when the Cougars finished as 3A state runner-up in back-to-back seasons.
She was a team leader the last two seasons as Carson rebuilt in 2014 and returned to prominence in 2015, making 3A’s Elite Eight, winning the South Piedmont Conference Tournament and sharing the SPC regular-season title with Cox Mill.
“That’s what I’m proudest of,” Hester said. “That we won championships three out of the four years I played for Carson. We played for two state championships, and this year we came close to getting back there.”
Carson coach Kelan Rogers had a record of 110-18 in Hester’s four seasons.
“Morgan was awesome for four years,” he said. “She made an impact on the varsity as a freshman, and she was a sophomore setter on a 34-1 team. She hits effectively, she blocks great for her size, and she’s excellent at serve-receive. She was a captain on the court and a leader off the court. She’s got a lot of drive and she just did it all for us.”
The stat sheet tells part of the story. Hester led the Indians with 696 assists and 52 service aces. She was second on the team in receiving serves (173) and blocks (51). She was third in digs (87) and she even tossed in 97 kills.
While she did it a lot statistically, her intangibles were greater than any numbers can quantity. She was an extension of Rogers on the floor. It was like he had an assistant coach in uniform.
“Her sophomore year we had a lot of conversations,” Rogers said. “I’d call her over and I’d ask her why did she do this and why did she do that. We haven’t had many conversations the last two years. She’s been making great decisions. She’s doing exactly what she needed to be doing.”
Carson junior Elena Turnbull’s season was frequently spectacular. Usually there was a fundamental play by Hester that led to Turnbull’s powerful kills.
“Morgan and I have played together since we were 11 or 12 as setter and hitter,” Turnbull said. “Morgan sees the game really well. She knows all the plays and she knows what to do and when to do it.”
Jordan Osborne, a senior libero who led the Cougars in digs, goes back even further with Hester. They started developing chemistry in their kindergarten days.
“It’s crazy to think that we’re seniors now,” Osborne said. “You can’t say enough about Morgan, Over the years, I’ve watched her improve so much.”
Carson “struggled” to a 17-10 season in 2014 after heavy graduation losses and a shoulder injury to Turnbull. But Hester helped the Cougars get back on track her senior year.
“We didn’t have the kind of height we had two years ago,” she said. “But we got along, we played as a family and we played with chemistry. That’s what made this team so good, and it was a great way to end my high school career.”
Hester moves own to new challenges, and her head and heart will make Catawba a better program.
“I’m thrilled she’s staying close,” Rogers said. “She’s great working with young kids, and we want her to always be part of Carson volleyball.”