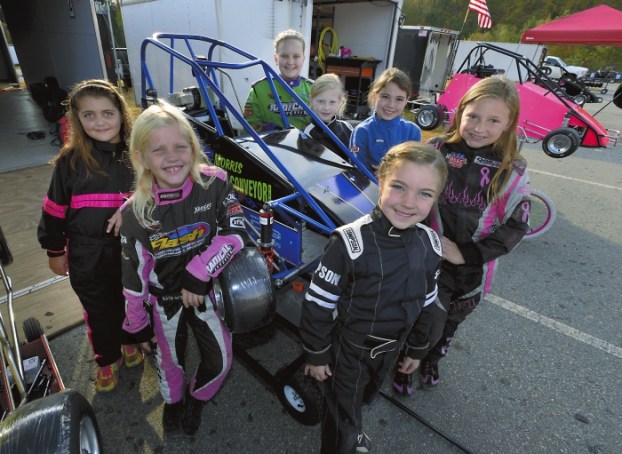 It’s a beautiful fall morning, brisk and clear. In the distance, campers and trailers of varying sizes are set up around the track. There’s a low hum that gets louder the closer you get.

The 1/20-mile track at the N.C. Quarter Midget Association was built more than a decade ago by NASCAR’S Bobby Labonte and others, and in the years since is attracting more girls to the sport than ever. It’s located at 1130 Speedway Boulevard in Salisbury, just off I-85 at Peach Orchard Road.

Ed Kenney, track director, estimates the ratio of boys to girls at 70 percent to 30 percent.

The girls come to race.

The track is a good one, says Rick Morris, whose granddaughter, Lacey Houghton, is a racer.

Abigail Kenney, 10, has been racing half her life. She’s tall for her age, and this morning, the Granite Quarry Elementary fifth-grader is garbed — for the moment, in jeans, a pink hoodie and hot pink headband.

“I think that it’s awesome that girls get to race on this track,” Abigail says. “I used to do basketball, but not anymore.”

The girls — and boys — who race at this track also race the regional circuit throughout the Southeast or the nationwide circuit. The vast majority of these girls have dads or granddads or uncles who have raced over the years.

That’s the case for Jaedyn Altiers, 9, of Lexington. The petite girl with a white-blonde braid has raced for two years. She’s flipped before, and it scared her, but she’s kept on racing, “because I like it.”

Grandmother Rhonda Altiers is at the track this morning to lend support. Her husband races, her dad raced — three of her four children, including a daughter, have raced, she says. “It’s just another generation. It’s just something we’ve liked and something we did.”

So what will Jaedyn do after she ages out of the youth division at age 16?

“Probably go to NASCAR,” she says.

Well, not exactly. There are a seemingly infinite number of divisions for quarter midget racing before racers move to dirt tracks or asphalt racing.

He says of Jaedyn, however, “She’s smooth and smart.”

Lauren Lauderback, 10, lives in Charleston with her mom, but comes to this racetrack because her dad lives here.

“My brother started doing it a few weeks before me and I wanted to do it, too,” Lauren says.

Despite the safety, Rick admits, “I just wad up in a ball of nerves when Lacey races. But I know they’re safe out there.”

Several of the girls here hail from Mooresville. That includes Delana Hodge, 9, a spitfire with three championships under her belt this year alone.

She likes, she says, “how you can go fast and race competitively with other people.”

“Some races are hard to win,” she says. “I have to practice a lot to win and race good.”

The racers are grouped by age, not gender. Ask this group of young ladies who the better racers are, and you’ll get the answer you thought you would: “Girls!” they all holler.

“Cause there’s a lot of girl power here,” Abigail says. “All the girls who race here are friends.”

Other girls who are racing include Maci Burkhart, 9, of Archdale; Taylor Owens, 6, of Mooresville; and Brianna Lawson, 6, of Southern Pines.

“I think the girls learn quicker than the boys,” Rick says.

Back in the day, Ed was a drag racer, and Abigail was at the track by the time she was 2 months old. She slept through the whole thing, because she’d been there in the womb, her dad says with pride.

“I parked my stuff when she turned 5,” says Ed, who serves as track director. His dad also raced.

Ed likes the family atmosphere the track provides. “Once you come in the gate, you don’t have to worry about the kids.”

Although he works at United Rentals, he admits, “This place has been my baby.”

On racing weekends, the track can see 50 to 60 racers, boys and girls, who come from as far as Fayetteville, Fort Mill and Rock Hill, Ed says. Ronnie notes that 10 races take place on a Saturday — 25 laps for the junior class and 40 for the senior class. Up to 10 racers can compete per race.

Ed likes the fact that girls are making a strong showing at this track. Abigail is his only child.

“Why should the boys have all the fun?” he asks.

As is Connor Yonchuk, 11, of Winston-Salem. His sister, Katie, 7, also races. They come from a racing family. Katie’s car is adorned with artwork of Elsa and Olaf from “Frozen.”

“This is what our kids love,” says Kelly Yonchuk, whose husband, Chris, works for a racing team, and builds a lot of motors for the young racers.

The Yonchuks met at a racetrack. Kelly was hooked from the start.

“This is the perfect environment for kids,” she says. “They learn patience, sportsmanship, respect and professionalism. When you come off that track, no matter how the race went, you congratulate every driver. That’s what we teach our kids.”

But Kelly insists that it doesn’t matter who wins.

“It’s the memories they’re going to get, and the friends you made,” she says. “That’s the stuff you remember. These people become your family.”

By Susan Shinn For the Salisbury Post Priscilla Clark’s neighbors stood on the sidewalk and applauded when she began renovations... read more