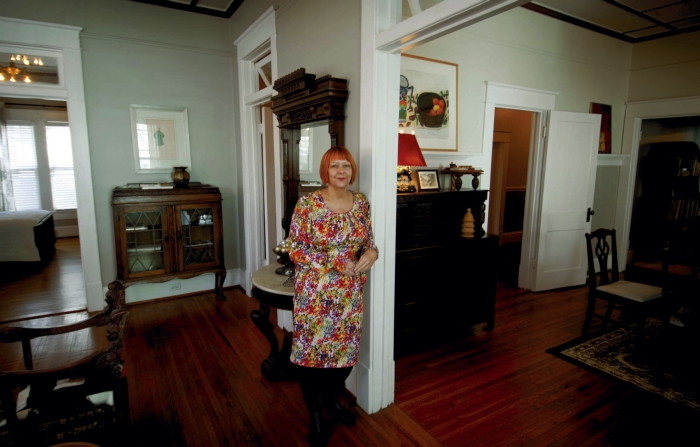 JON C. LAKEY / SALISBURY POST Priscilla Clark's circa 1915 Arts and Crafts bungalow at 221 Wiley Ave. is one of four homes on the 2015 Holiday Home tour for the Fulton Heights neighborhood. Friday, November 27, 2015, in Salisbury, N.C.

Priscilla Clark’s neighbors stood on the sidewalk and applauded when she began renovations to the Wiley Avenue home she purchased this summer.

The home had been empty for four years and neglected for much longer than that, and had become an eyesore in the Fulton Heights neighborhood.

Clark, an interior designer, has worked hard for the past five months to transform this 1,800-square-foot early Arts and Crafts bungalow into a tranquil retreat.

“It hadn’t seen a lick of paint and a lot of love for a long time,” says Clark, who moved to Salisbury after spending most of her life in Canada. “It was pretty grim.”

The house is one of four homes on the annual Fulton Heights Christmas Tour, which takes place 5-8 p.m. Dec. 5.

Clark was drawn to Salisbury because of the large number of old homes here.

“I decided to live somewhere where historic preservation is important,” she says. She spent 20 years in Montreal, and four years in Alberta. “There’s nothing old there.”

Clark’s parents were born in North Carolina, and Salisbury kept “popping up” in her research, she says. She came to town in June and looked at more than 20 houses.

She was able to look past the ugliness in the Wiley Avenue home too see its good bones. A lion’s share of her budget went into replacing the front steps and footing underneath the front porch. Still, she notes that she furnished the home for less than $2,000, scouring local shops for finds.

Hughes White, a grocer, built the house in 1915 for his daughter, Thetis White, who married a store clerk, Kyle Cress. The house is named the White-Cress House, although she hasn’t yet had time to put the plaque on the front porch.

The house is an early example of the Arts and Crafts period, which came into its own in the 1920s and 30s. Clark notes that the light fixtures — some of which came with the house, some of which she purchased locally — have more of a Victorian touch.

“This house is traditional in a lot of respects,” she says.

The front door opens into the living room. Here, Clark brought an 1830 Biedermeier couch she found in Ontario. Complementing the sofa are a Second Empire chair she bought at the Emporium, and Tudor-style chair from 1839 Antiques.

“I’m kind of eclectic,” Clark says. “I mix my periods. This is my personal style.”

Additionally, she found two long Asian antique benches that serve as a coffee table. Those came from 1839 Antiques.

The master bedroom has a his-and-hers closet, rare for the time. Clark has framed fashion plates on the walls, which she found at a garage sale. She is a former fashion designer.

The home has a 5-foot wide shotgun hallway, which connects the rest of the rooms after the master bedroom and living room on the front of the house. The dining room boasts built-in china cabinets. A fireplace was added later, one of three in the house along with those in the master bedroom and living room. Clark added grating she found at Historic Salisbury Foundation’s Architectural Salvage Warehouse — what locals call the Ice House.

Another interesting architectural detail is the ornamental wooden ceilings — again another hallmark of the early Arts and Crafts period. Clark worked with contractor C.J. Peters, who told her he’d seen this treatment only once before.

Clark chose a dove gray color for most of the walls, painting the metal cabinets in the kitchen indigo, and repeating that rich color for the original claw foot tub in the bathroom.

Clark calls the breakfast nook a “cute little area” that can easily double as office space. Nearby is a unique bookcase made from the case for a baby grand piano. Clark found it at the Ugly Duckling, now closed.

Clark guesses the kitchen was added post World-War II. Clark did lots of work in the small space for just a little money, about $700. Along with painting the cabinets — which had been turquoise — she designed open shelving with brackets called corbels. She also found those at the Ice House. Her contractor built them and they sit above the original farm sink. She placed faux granite on the countertops, and added tiles in gray, blue and cream to the walls.

Here and in other rooms, Clark has placed light fixtures donated by Mary Walker of Across the Pond.

In the guest bedroom, she ripped up a shag rug only to discover dog urine stains on the oak floors. She refinished those, and picked up a walnut bedroom bed and dresser at the Emporium. The dresser is topped with pink marble, so Clark found a lovely flame stitch chair in complementing colors at Great Finds and Designs. Large windows take up two walls in this room.

In the hallway, Clark paired two church chairs she found in Edmonton via upstate New York with an upcycled piece made from a buffet and organ casing from Great Finds and Designs.

“I just thought it was really cool,” she says of the unusual piece.

The focal point of her office is a courting couch she found in Montreal. Her two dachshunds, Akira and Zaila, love it because each dog has her own space — a hump in the middle divides the seating.

Her desk came from 1839 Antiques — a huge slab of live-edge wood atop a Singer sewing machine base. She purchased the wooden office chair from Beggar’s Bazaar for $7. She rewired the oversized lamp, once a medical therapeutic heat lamp.

“I did not bring a lot of furniture with me,” Clark says. “It’s expensive to ship, and I want to be the go-to person in town for finds. I’ve been pretty much finding what I need.”

In the bathroom, she reversed the door, which opened right onto the toilet, and removed another door that led to the tub and sink. She stenciled indigo accents on the white floor.

“The cost of the porch, plus the exchange rate, cut into what I was able to do,” Clark says. “I looked online at Pinterest and blogs. You can design on a budget. Just keep your eye open.”

When choosing a color palette, Clark says, look at the clothing you have and the artwork, and see what colors stand out.

“Sometimes you need that jumping-off point,” she says.

Clark says of her choice of gray walls, “I wanted that color to carry through the house. I wanted this house to have a much flow as possible. The soft and muted walls emphasize the ceiling.”

Throughout the home are coordinating but not matching curtains, which Clark found at Marshall’s and T.J. Maxx.

“You do not have to be rich to hire a designer,” she points out. “A designer can save you money.”

A fun accessory she found is a huge red crown that sits atop the dining room mantel. Once, Clark saw a crown commemorating Queen Elizabeth’s coronation. When she went back the next day to buy it, it was gone. She found this one at 1839 Antiques.