Al Wilson’s crew went above and beyond for St. Luke’s renovation 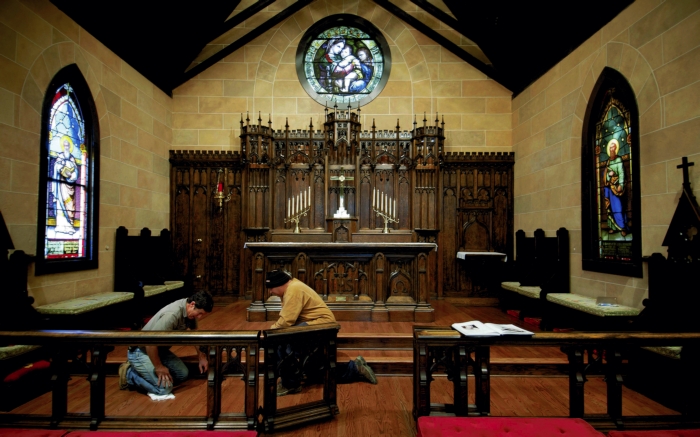 Al Wilson and Tim Brown look at a plank in the altar area of St. Luke's Episcopal Church during a major renovation to the sanctuary in 2015. JON C. LAKEY / SALISBURY POST

Al Wilson is modest and almost even shy when it comes to discussing large projects such as this. But he’s eager to lift up others involved in the St. Luke’s renovation:

The liturgical designer specified a company in Pennsylvania to modify the church furniture and construct the new pieces needed to match the existing. We decided to keep that work local since we have many skilled craftsmen here in Rowan County.

Dowd Temple, a member at St. Luke’s, built the new platform on which the baptismal font is mounted. It is built using flooring from the 1883 addition with an inlaid cross from wood donated by a parishioner.

In the font will be a cradle to hold the bowl of baptismal water. Lee Spears is making the cradle from a piece of limb that broke off the ancient evergreen that used to stand in front of the church. We found the limb in the attic where it came to rest after crashing through the roof at some time in the distant past. Lee also made tracery for the new pew ends in the choir loft.

My guys have done a tremendous job and It would not have been possible to do a job like this and sub out all of the tasks.

Brad Hartle stripped the old organ panel that is now mounted under the new instrument. It is almost impossible to tell that it is not part of the new organ even though it dates back to 1936, two organs ago.

Mike Butler helped coordinate the installation of the organ with regard to wiring for power and sound. He makes things go smoothly when subs come on the job site.

Tim Brown and Will McCubbins cleaned and repaired the damaged finishes on all of the pews in the knave while preserving the patina of 100 years of touching by parishioners.

Gilbert Soto made sure all of the pews went back in place correctly and that all of the kneelers functioned. No small task.