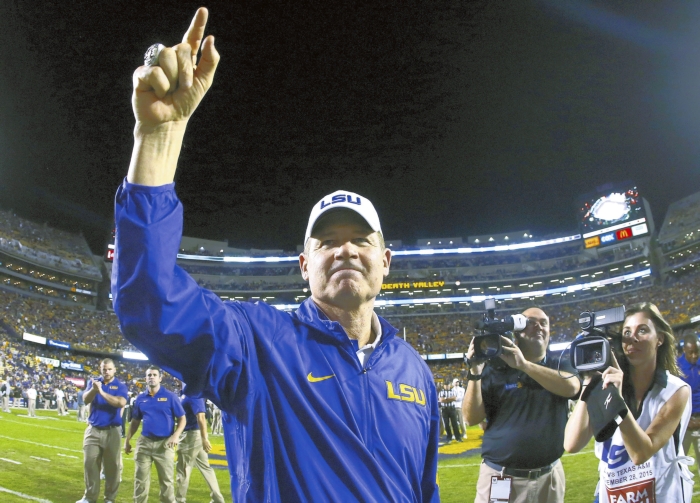 Minutes after the embattled coach was carried off on his players shoulders while fans serenaded him, athletic director Joe Alleva said Miles will remain at the school.

Leonard Fournette ran for 159 yards, Derrius Guice had a 50-yard scoring run and a touchdown and LSU beat Texas A&M 19-7 on Saturday night in the home finale at Death Valley.

Guice had 73 yards rushing and also had a 75-yard kickoff return for LSU (8-3, 5-3 Southeastern Conference), which ended a three-game skid that had raised questions about Miles’ job security. LSU’s administration had declined to comment on Miles’ status, fueling speculation that his days roaming Death Valley’s home sideline were about to end after 11 seasons.

And they got their wish.

Fournette, who was one of Miles’ prized 2014 recruits, finished the game owning LSU’s single-season rushing record at 1,741 yards, surpassing the mark of 1,686 yards set by Charles Alexander in 1977.

Kyle Allen passed for 161 yards and one touchdown for the Aggies (8-4, 4-4), but had a pass intercepted by Donte Jackson inside the final 2 minutes, all but sealing LSU’s victory.

Through game day, Miles’ biggest fans made sure they were seen and heard.

During the “Tiger Walk,” from the team busses to the stadium, Miles was greeted like a hero as he waved to the crowd, at times pausing and turning around as if to soak it all in. Many fans held up signs expressing support for the embattled coach, some urging LSU to give him at least one more season.

Inside Death Valley before kickoff, the crowd roared when Miles was introduce during Senior Day ceremonies. The coach tipped his trademark baseball cap to acknowledge the crowd, raising the volume a little more. As the clock wound down, fans serenaded the coach by chanting his name.

Miles overall record improved to 111-32. LSU could have had a nine-win regular season if not for lightning canceling the season opener against heavy underdog McNeese State.

Yet, some of the very aspects of LSU’s game that have bothered Miles’ critics showed up often during the regular season finale for both teams.

There were a handful of pre-snap penalties and the passing game was largely ineffective. Brandon Harris was 7 of 21 for 83 yards, no touchdowns and an interception. A number of his passes sailed over intended receivers or skipped off the grass short of their mark. Most of his receptions came on check downs to running backs, including a critical third-down swing pass to Fournette for a 17-yard gain that sustained the Tigers’ final scoring drive.

LSU’s frustrations on offense were encapsulated by the opening possession of the second half, which began on the A&M 25 after Guice’s long kickoff return in which he broke more than a half-dozen tackles before finally getting pushed out of bounds.

Hindered by a false start and a sack, the Tigers had to settle for a 46-yard field goal try, which Trent Domingue pushed wide right for the kicker’s third miss of the game.

When the Tigers finally got a big play to take a 13-7 lead, it came on Guice’s long run.

That allowed Texas A&M to take a 7-6 lead into halftime. The Aggies’ lone score came on Allen’s 8-yard, third-down pass over the middle to Ricky Seals-Jones.

The Aggies squandered a chance to widen their lead when Allen was sacked and stripped by Kendell Beckwith on the LSU 13, with the Tigers’ Devon Godchaux recovering.