‘A matter of the heart:’ China Grove couple talks about adoption 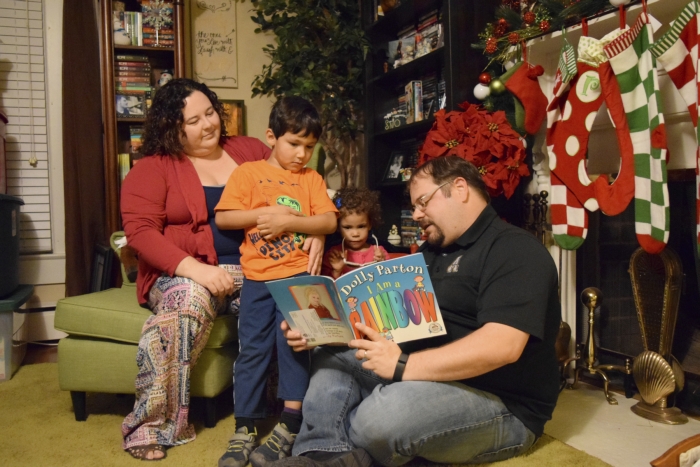 Georgianna and Reed Karriker read to their two adopted children: Andrew, 5, and Olivia, 2.

November is National Adoption Month and at Georgianna and Reed Karriker’s house in China Grove, it’s observed, well, not quietly, but with great joy. The house is warm, and full of love and laughter as the family prepares to drive to Lake Waccamaw for Thanksgiving. In the living room, a five year-old sits on the floor watching Charlie Brown. A two year-old with curly hair totters up to her parents in Frozen-inspired boots, brandishes a plastic camera and asks to take a picture. Reed laughs and calls her “our little photographer.”

They say they always wanted a family.

“You always figure you’re gonna have kids,” Reed said. “You figure it’s just the natural progression in life, you know. You meet, you fall in love, you get married, you make a home, you have children.”

But for the Karrikers, the children never came. Three years ago, they began looking at other ways to create the large family they’d dreamed about

“Adoption was a way for us to have the family we always wanted,” Reed said.

They wanted to adopt locally, but adoptions aren’t very common in Rowan County, Georgianna said. Rowan County DSS focuses on reunifying children with their birth parents, or encourages shared guardianship with birth parents. But family is something of a passion for the Karrikers, and if they couldn’t adopt, they’d foster.

Word’s gotten out about the hurdles parents go through to adopt, but becoming foster parents is its own unique struggle. For Reed, who had little experience with children, choosing to foster was not an easy decision.

To become foster parents in Rowan County, prospective couples have to undergo ten weeks of training and become licensed. For Reed, those ten weeks dispelled a lot of the myths and rumors that surround the foster care system.

“It’s very misleading, the idea that’s out there of what foster children are and what, in turn, foster parents are,” he said.

A lot of kids do end up in the system because of trauma, abuse, neglect or dependency. But there’s no formula for kids coming into foster care, Georgianna said. Everyone has their own story. In Rowan County, she says, a lot of kids end up in foster homes due to poverty.

“Families teeter and totter on that edge all the time,” she said.

And foster parents aren’t the child beaters or penny-pinchers rumor portrays them to be, either.

“Foster parents are people with big hearts and small homes who do everything they can to give a child a second chance. There’s a passion for it,” Reed said.

After ten weeks of training, the Karrikers got their foster license in March of 2013. In Nov., they had their first placement — Andrew, age 3, and Olivia, 9 months.

“We went from no kids, just us and dogs, to two overnight,” Georgiana said.

And the house went from put-together to the kid’s playground with toys clothes, training potties, children’s books and items from a play kitchen scattered around every room.

Originally, Andrew and Olivia were supposed to be reunified with their birth mothers. But after they’d been with the Karrikers for a year and a half, their case plan changed. They were adoptable.

“When we found out we were able to adopt them, we were overjoyed,” Georgianna said.

So they began the long, emotional rollercoaster that is the adoption process: coming to a final decision, the court dates, the home visits, the finances and making sure they met all the requirements. The wait was excruciating.

“But in our case, it was a matter of the heart,” Reed said. “We knew what we wanted.”

The Karrikers say that their adoption was atypical — It was their first foster care placement, the case plan for the children changed suddenly and the adoption paperwork finalized in just three months. On July 10, Andrew and Olivia became a permanent part of the Karriker household.

The Karrikers continue to expand their small family by fostering other children. They love the community and the other foster families they’ve gotten to know.

“We love family. We love getting together with family, and we have an ever growing family,” Reed said.

The Karrikers currently have a two-year-old foster child living with them. Georgianna calls having two two year-olds “toddler in stereo.”

“They’re everywhere all the time,” she said, “which is amazing and wonderful and exactly what we always wanted. We wanted a house full of children and laughter and running and excitement.”

“I think it’s been a positive experience.” Reed said.

It’s been an overwhelmingly positive experience for their family, but there are some things the Karrikers have learned about the process. While it didn’t happen to them, they say that with adoption it’s possible to file all the paperwork, do everything correctly and still wind up with nothing in the end.

The Karrikers say that they would advise people who are thinking about adopting a child to consider fostering or fostering to adopt.

“We have a lot of children in our county who need a home, who need a permanent home,” Georgianna said.