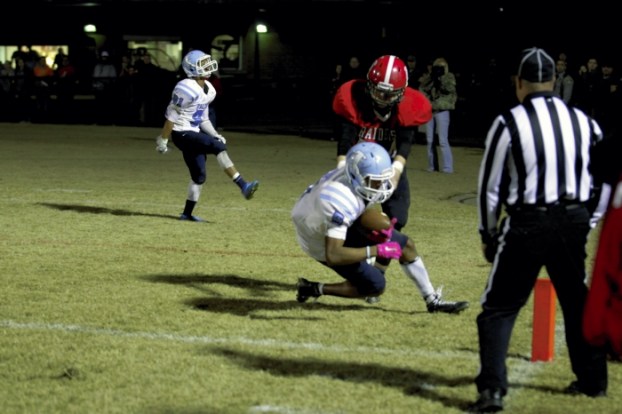 James Sipes/For the Salisbury Post... West Rowan receiver Kortez Weeks (5) catches a touchdown pass with 6.9 seconds left on the clock to bring West to within one point. However, the Falcons failed on the two-point conversion and lost, 28-27. to South Point in the third round of the state playoffs, Friday night in Belmont. West’s Juwan (81) celebrates the TD in the back of the end zone.

BELMONT — In the first half of South Point’s third round playoff game against West Rowan Friday night, the Red Raiders offense spent most of the time standing on the sideline.

A deliberate, methodical Falcon offense kept the ball out of South Point’s hands, as West Rowan built a

14-7 lead at the break and held South Point to only two drives, running 38 plays to South Point’s 21.

On the final defensive snap of the game, South Point’s offense once again stood on the sidelines – the

result completely out of their control. This time, the South Point defense came through.

West Rowan had just driven down the field to score a touchdown with 6.9 seconds left when quarterback Kacey Otto found receiver Kortez Weeks in the corner of the end zone. Down a point, the Falcons lined up to go for a two-point conversion and the win.

football career could be over.

“I was praying, you never realize what your last play is going to be, because I don’t know if I’m playing

football in college after this or not,” Etherton said. “That really hit me right there, you can’t take any play for granted.”

Otto was flushed out of the pocket. A South Point defensive line that was knocked back on its heels early

relentlessly chased after the Falcons’ senior quarterback. As Otto ran out of room on the sideline, he

desperately tossed a throw to the end zone, but it was batted down by South Point sophomore Jake

Mountain in Belmont next Friday night, with a trip to the state final on the line.

Senior defensive lineman AJ Alverson said after the late touchdown, he was hoping to get one more

chance to keep his team alive on the two-point conversion.

“I’m hoping they go for two, man. I’m wanting to stop them. I don’t want to go into overtime. I just want

to get this game done and finish it. I want to get this win – that’s it,” Alverson said.

Otto threw the ball on the late touchdown, but the senior QB was tough to handle on

the ground for the Red Raiders all night. He rushed 23 times for 70 yards, including a score, and

tries to extend drives and keep the ball away from South Point.

“They’re big and physical, that quarterback was a doggone load, and they got 300-pounders up there

blocking for him,” said South Point coach Mickey Lineberger. “It makes it tough. Our kids’ character was tested and we rose to the occasion.”

In the second half, the Red Raider defense got three consecutive stops – including a JT Starr

interception – to turn the momentum of the game. Etherton ran in a 1-yard score early in the third to tie things up, then Diontrea King (13 carries, 91 yards) and Nolan Wilson (6 carries, 34 yards) added scores to make it 28-14.

West Rowan had one final push in it, scoring twice in the final 6:36 to cut the deficit to one before the

Lineberger said he had confidence in his team to step up in a big spot.

“I turned around and told them we’re going to win the game. They’re going to line up and go for two.

They were tickled to death about it,” he said. “We’re blessed for four more quarters to play next Friday