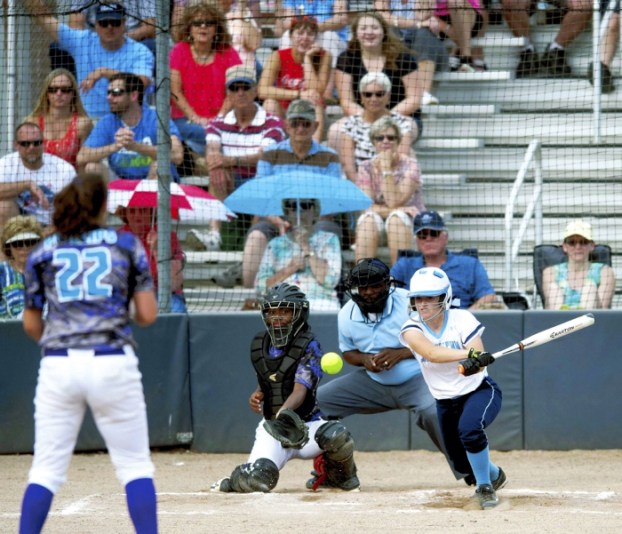 MOUNT ULLA — West Rowan softball coach Jimmy Greene sleeps well every night even though he lost his star shortstop to graduation.
Hunter Gibbons was a powerful force for the Falcons, a two-time Rowan County and South Piedmont Conference Player of the Year, but Greene still manages to smile more than he frowns when he talks about what’s going to happen this spring. He has his replacement for Gibbons picked out — 5-foot Taylor Martin, last year’s second baseman.
“She can handle shortstop,” Greene said. “Nine Taylor Martins would win the state championship.”
When it comes to female athletics at West, Martin is often the solution, and never a problem.
Whether it’s volleyball, basketball or softball, she’s one of the county’s top 10 performers. She goes year-round, she goes hard, and she goes in a hurry.
She’s a lot grittier than she looks. If she stood 6 feet tall, she’d probably be on the cover of Sports Illustrated.
“She’s one of the best pure athletes in the school — and the county,” Greene said.
Signing Day for Martin caused a packed house in West’s media center.
She signed with Catawba’s softball program , honoring a verbal commitment she gave her junior year, but her teammates also were there from basketball and volleyball. So were a lot of other people — people who teach her, coach her or just cheer for her.
“You can look around the room, and see that this girl is liked and loved by a whole lot of people,” Greene said.
Taylor’s mother, Rhonda, made sure everyone had a photo opportunity. Members of each team took turns coming down to sit next to Taylor, as pictures were snapped. It took a while. No one minded.
Before she graduates, Martin will be part of nine varsity teams at West. That’s four softball seasons, three basketball seasons and two volleyball seasons.
She said she was a little nervous when she was a freshman on the varsity softball team, but once that first pitch was thrown, the butterflies stopped, and adrenaline and her competitive nature took over.
“High school has been a blur of practices and games, one after the next,” Martin said. “But I wouldn’t have it any other way. I think I’d be bored if I wasn’t playing a sport.”
The summer isn’t a break. That’s actually her busiest time because that’s when all those sports intersect.
“There have been some summer days with a volleyball practice, a basketball camp and a softball tournament,” Martin said with a laugh.
She’s attended a lot of summer camps. Some of her favorites were Catawba camps. That’s one reason she signed with the Indians. Another reason is that by playing at Whitley Field, a lot of family and friends will have a chance to see her often.
“I love the Catawba team and I love the coaches,” Martin said. “Catawba has always been high on my list.”
Martin just finished an all-conference volleyball season for West, a season in which she led the SPC in digs. Making digs is one those times when it’s not a bad thing to be a 5-footer.
She’s scored 553 points in varsity basketball in two seasons and scored a career-high 24 in each of her last two games as a junior on her way to all-county honors.
Softball, a sport that’s been a big part of her life since age 10, is still what she does best.
She’s been all-county three times. Size is no factor on the diamond, and she excels at every aspect of softball. She can slap, she’s an aggressive baserunner, she’s a spectacular infielder, and she can drill line drives. She can beat you in a lot of ways.
Taylor’s father, Clai, was a very good baseball player at Salisbury High and the first Mark Norris Memorial Award winner in 1978. That’s probably where her sweet swing comes from.
West has won back-to-back conference championships in softball. Martin has contributed 61 hits and 59 runs in those two seasons. She batted .451 as a sophomore. She hit a lot of balls right at defenders last year and only batted .300, but she’s hoping the softball gods will even things out her senior season.
Martin has been involved in eight double plays the last two seasons. She only made two errors as a junior while recording 43 putouts and 35 assists.
“Taylor is just a huge asset to our team,” West’s standout pitcher Peyton Greene said. “Not only is she a great player, she keeps everyone smiling. She’s got the best attitude, no matter what.”
A lot of people are enthusiastic about Martin staying in Rowan County for her college career.
“She’s a great person,” Coach Greene said. “And she’s shown that no matter how big you are, you can be a great player.”
She’s been good enough that a lot of young people at West look up to a 5-footer.