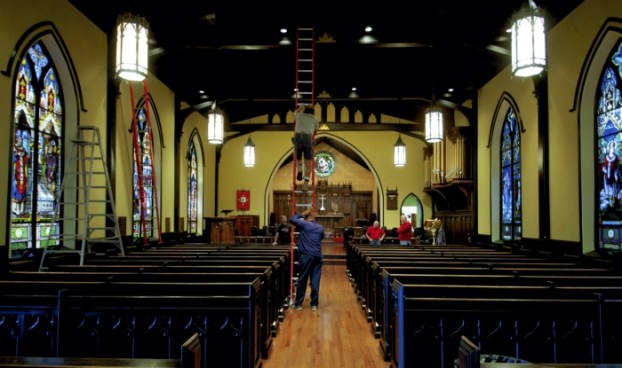 JON C. LAKEY / SALISBURY POST Electrician Bubba Haus ladder to reach a light that he moved that is 28 feet over the floor. Historic St. Luke's Episcopal Church has been undergoing a major renovation to the sanctuary. Friday, November 20, 2015, in Salisbury, N.C.

With saws whirring and hammers banging out an accompaniment, Al Wilson is singing — badly.

A photographer has spied Wilson working in the door of St. Luke’s Episcopal Church, and the light is perfect.

This is a story about music, with more than a little magic included.

St. Luke’s has recently completed a five-month renovation, which includes the installation of a new organ. The congregation will worship in the new space tomorrow morning at 8 and 10:30 a.m. A choral evensong at 5:30 p.m. will showcase the abilities of the Aeolian-Skinner by Walker organ.

The Proctor Foundation gave the instrument in memory of Edward and Lucile Proctor. Additionally, alterations and enhancements to the chancel and nave were given by the estate of Augustus Hobson Price; Bill and Shari Graham; Mary Messinger; Ed and Susan Norvell in honor of Davis Cooke and Dick Martin; Owen and Elizabeth Norvell; Patsy Rendleman; Bill and Nancy Stanback; Jane Arant and Margaret Medley in memory of their mother, Margaret Weant; and the Women of St. Luke’s.

Because of space constraints, the congregation selected a hybrid instrument that’s a combination pipe and electronic organ. Davis Cooke, a St. Luke’s member who served as project coordinator, calls himself an organ purist. But this instrument won him over.

“This instrument is most suitable for Anglican worship,” he says. “Now we have what we need tonally, logically and appropriately to enhance worship.”

“We were the last parish in North Carolina established before the Revolutionary War,” Cooke says.

In June, the congregation began a renovation of its sanctuary building, necessitated by the organ installation. What started as a fairly straightforward project quickly became complicated by what contractor Wilson and his workers found.

Built in 1883, the current church was expanded in 1909 to its present structure. During that renovation, a slate roof was added, but with no additional support to the roof structure. Over the years, the roof began to bow out.

“When some minor repairs were done, the roof structure was not reinforced,” Wilson says. “With the added weight of the slate roof, it was just overloaded. The roof was squatting and spreading the walls. I knew at that point, we needed an engineer.”

Wilson solved the problem by building a new roof support system on the ground, and then hoisting it up, without taking off the roof or the ceiling. Wilson and his crew also repaired 10 of 12 pilasters or columns on the inside of the sanctuary, which had been damaged by termites and were pulling off from the walls.

Ed Norvell served as the project’s fundraiser. When his family’s foundation, the Proctor Foundation, dissolved a few years ago, the foundation made two $500,000 bequests. One went to the J.F. Hurley Y, the other to St. Luke’s for a new organ. When construction issues arose and more money was needed, Norvell got on the phone, and raised $125,000 in less than 24 hours.

“It was not a big campaign,” Norvell explains. “We went to a few large donors.”

The front of the sanctuary was also reworked to create more space for a choir that has grown over the years — but had nowhere to go except the front two pews. Those pews were removed and the choir’s space expanded. In addition, the pulpit was moved out about 8 feet, and turned at a 45-degree angle to face outward. Cooke believes that’s how the 18th-century pulpit would have been placed.

“We have here an homage to our 18th-century roots,” he says. “Now you can see the pulpit better.”

The altar is now freestanding, having been pulled out from the reredos or back wall. Cooke thinks whoever built the altar knew it might one day be pulled out. Now Holy Communion can be celebrated on either side of the altar, and congregants now use the actual altar instead of a table, which sat in front of it.

Church member Deanne Thurber kept the wooden rosettes from the 1936 organ screen. They’re now used to adorn the part of the reredos, which was added when the altar was pulled away.

“She held on to them all this time,” Cooke says. “That’s example of the magical things that took place. Alfred likes to say, ‘Let the building tell you what it wants.’ So that’s what we did.”

The expansion of the choir seating helped reclaim unused space in front of the altar.

“We were trying to improve upon what we had,” Cooke says. “Our 1970 organ caused that configuration, and this seemed appropriate time to correct the restrictive relationship.”

This is Wilson’s third large project, following Lee Street Theater, and the renovation of the Fulton-Mock-Blackmer-Dixon House.

With a church project, he says, “you have a lot of people who have an intimate connection to the space. That’s the biggest challenge with churches.”

With a home or a church, he says, “people are very passionate about their space.”

Then add the historic aspect of St. Luke’s, which has deep roots in the community, Wilson says, “and there’s a certain sensitivity to everything.”

After three years’ worth of such visible projects, Wilson is going to take a few days off during the Thanksgiving holiday before beginning work on some “odds and ends that have been pushed to the side.”

Cooke says of the St. Luke’s project: “It’s been magical. It has been one of the greatest things in my life. Everything has met or exceeded our wildest expectations.”

As for Norvell, he laughs when he says that his family has “only” been at St. Luke’s for five generations.

“It’s very exciting to me,” he says of the project. “It’s a renewal of our church. Our family has been so connected to the church. I wouldn’t miss tomorrow’s service for the world.”