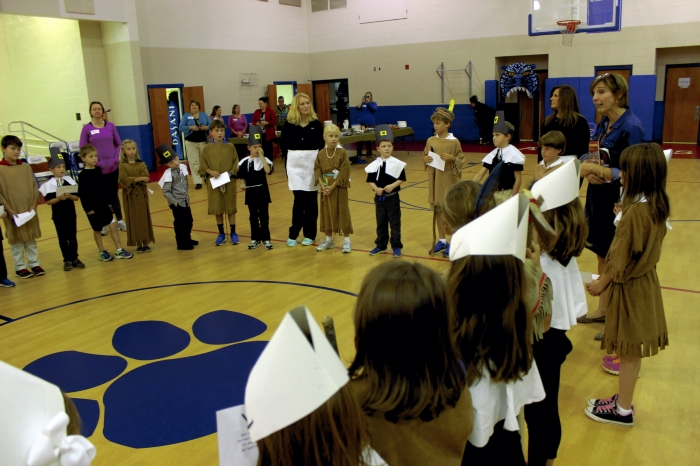 Salisbury Academy first and third graders said a Thanksgiving blessing over the shared a meal that was similar to what Pilgrims and Native Americans ate on the first Thanksgiving. Submitted photo

The first- and third-graders of Salisbury Academy feasted on Thanksgiving favorites, old and new.

Each year, the students re-enact the first Thanksgiving. The meal starts with a Thanksgiving blessing and includes simple, natural foods that are similar to the meals the Native Americans and Pilgrims might have eaten together.

Jody Robbins, first grade teacher, said pumpkin pies, cranberries, sweet potatoes and white potatoes were not grown or found by the Pilgrims. The students gobbled down dishes like cooked carrots, pumpkin soup and venison instead.

Before the feast, the first-graders learned about the history and journey of the Pilgrims, Robbins said. They discussed how the Pilgrims left their home country because of their religious beliefs.

“We also discussed how hard the Pilgrims had to work to start their village called Plymouth Plantation and how the Native Americans helped them to succeed,” Robbins stated in an email.

For the third-graders, the feast was the introduction to their lesson on Native Americans. They will study Native American rituals, customs, lifestyles and history.

First-grader Caleb DeGood said the Native Americans were generous to help the Pilgrims survive in a new land.

“It was really nice of the Indians to help the pilgrims plant crops. They told them to put fish in the dirt, and that gave them better food,” DeGood said.

First-grader Ciella Turner said although she brought raisins, another dish was her favorite.

“I brought the raisins to the feast, but my favorite was the pumpkin soup,” she said.

First-grader Graham Shue said it was cool to share the feast with the third-graders.

“We usually don’t eat with the third-graders. I thought that was very fun to do with them and dress up,” he said.

Thanksgiving prayer shared at the gathering:

God, we thank you for this food,

For rest and home and all things good;

For wind and rain and sun above,

But most of all for those we love.