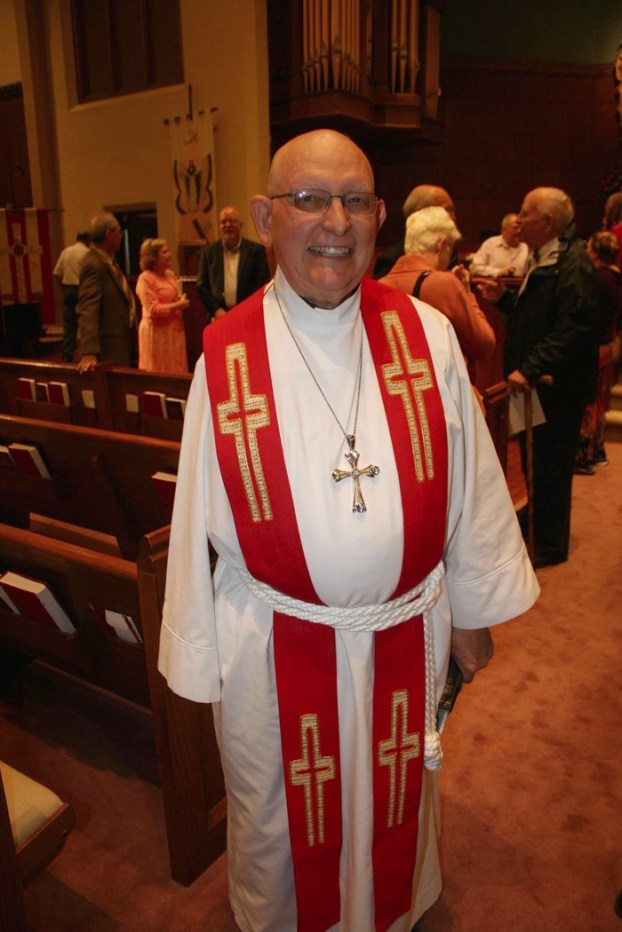 Gary and Linda Weant in the sanctuary of Philadelphia Lutheran Church in Dallas. Both are Rowan County natives. Susan Shinn/For the Salisbury Post

DALLAS, N.C. — Gary Weant is angry. And not only angry, but defiant.

“If cancer takes me down, we’re going down together, and his damn tongue’s gonna be hanging out.”

He reconsiders that quote.

The couple married in 1972, between college and seminary.

“Back then, it was pretty predictable,” Gary notes. “You went to college, you went to seminary, and we were able to come through seminary with low debt.”

By the spring of 1976, he says, he and most of his classmates knew where they were headed after graduation.

For Gary and Linda, it was to Philadelphia Lutheran, a hexagonal sanctuary set among a grove of trees. The congregation had roots to 1767, and the modern building is situated on high ground.

While there, the Weants had two children, Rebekah and Jonathan. Both are ordained Lutheran pastors. Rebekah Costello’s husband, Michael, is a minister of music, and Jonathan’s wife, Laura, is also a pastor. They have a daughter, Bethany, 3, and Rebekah and Michael, who live in Chicago, have two children, Andrew, 7½ and Lydia, 4.

Over the years, stability became important to the couple.

“We would not make a move with our children in school,” he says, “and then we did not want to move. I did not pursue other opportunities and calls. I do not regret that at all.”

And now this family stands with Gary in the fight of his life.

Last summer, his family was on vacation together. They were on vacation in Boone, coming out of a place called The Fun Factory. Gary was juggling keys, trying to get grandchildren in car seats. He tripped and fell on the sidewalk. He knew right away his right arm — his dominant arm — was broken. Gary and Linda sent their children and grandchildren back to the cabin, and went to the hospital in Boone.

“I want to show you something,” the doctor told him.

Together, they looked at Gary’s X-ray.

“I don’t have a trained eye,” Gary says, “but even I could see my bone looked moth-eaten and diseased.”

No wonder the humerus broke in two places.

Gary was referred to a specialist at Levine Cancer Center in Charlotte. On Aug. 25, the diagnosis was osteosarcoma, a bone cancer that typically develops in children and teenagers. Doctors recommended amputation. The disease had also spread to his left lung.

“This was all boom, boom, boom,” Gary says, ticking off each piece of bad news.

It was time to map out a strategy. Because the cancer was in his lung, Gary’s cancer was rated stage 4. He underwent chemotherapy to shrink the tumor and to try to salvage his right arm. The arm was amputated on Nov. 25, 2014.

“They go three inches from your neck and take everything,” Gary says. “There’s nothing there. It’s all gone.”

No hand. No arm. No shoulder. A prosthesis was impossible.

Still, he read his Bible, finding solace in Jeremiah 20, in which the prophet is persecuted.

“I was right there with him,” Gary says. “I had sort of gotten prepared for cancer.”

But being an amputee, he says, was an enormous life adjustment.

“I am a one-handed person in a universe designed for two hands,” he says.

He had to learn to write, type, dress — do everything left-handed.

That spring, he says, “I was emotionally and spiritually in a fog. There were days I wasn’t sure I would keep my sanity.”

Linda did all the driving, but otherwise let him learn to do things for himself.

“His recovery was phenomenal,” she says. “I still stand in awe.”

Gary, meanwhile, calls himself “stubbornly independent. I can write and type reasonably well, and I can tie my shoe with my left hand.”

Sure, he says, it takes him long to write sermons, and put together the newsletters and bulletins. “But I’ll just be doggone if I’m gonna let this handicap me.”

Gary has come to see cancer as a thief — a thief that would not rob him, he decided.

“There was a defiance that kicked in,” he says. “By the spring, I started to deal with my anger in a constructive way.”

Enormous support poured in from friends and family. He posts updates on Caring Bridge, and has received messages, emails, texts, calls and cards.

“I’ve saved every card I’ve received,” he says, and that number has passed 1,000. “I want to thank everyone personally. I started writing thank-you notes, and it got me out of the pit of despair and gave me hope.”

He knows that because of his health, he’s going to have to retire in the not-too-distant future.

By March, he’d gotten behind the wheel again, thanks to some adaptive driving tools.

“I felt like a teenager,” he says, “but I passed all the tests.”

Gary has undergone multiple rounds of chemotherapy. An 8-week clinical trial showed no progress. He’s back on chemotherapy, which is working for now. His next scan is tomorrow.

Gary knows he’ll have to resign if he becomes too sick. On Sunday, the congregation voted to call Dr. Marcus Miller, a retired bishop and former president of Lutheran Theological Southern Seminary. He will serve as assistant pastor, helping Gary in any way he can.

“That makes it much easier for me to back out,” he says.

His congregation wants to be as supportive and accommodating as possible.

“We couldn’t ask for a better pastor,” says Ginger Cloninger. She and her husband, Ray, are longtime members and longtime friends of the Weants. “We know each other’s warts and everything else.”

Ginger says of Gary, “He’s just great. Any time you call on him, he’s there. Since he’s been fighting cancer, I think his sermons have gotten better. They’ve always been good, but he lives his.”

“When my marriage ended, he was the pastor who helped me get through that as well,” she says. “He’s definitely the person I look to as my spiritual leader, and he’s part of my family. I’m not really sure what I would do without him.”

Cammie says that the congregation has taken meals to the Weants, and held hymn sings on the Sundays that Gary wasn’t able to preach.

“He’s helped us all through so much, and it would be ridiculous not to turn around and do the same thing for him,” Cammie says. “As long as he is able to work and wants to work, that’s what we want for him.”

Gary, who serves as secretary for the Lutheran church’s statewide Synod Council, keeps in close touch with Bishop Tim Smith.

“Bishop Smith has been wonderful and masterful in providing both a pastoral and spiritual presence to Linda and me,” he says. “In addition, he has also been most supportive of Philadelphia Lutheran Church, in helping us develop a model for ministry moving forward, given the uncertainties surrounding my future health.”

The bishop says of Gary, “Gary has served Philadelphia Lutheran Church in Dallas his whole ministerial career. He has been an active and respected ecumenical and Lutheran leader in Gaston County during those years.  He’s also been a leader in the N.C. Synod of the ELCA, currently serving as our Synod Secretary. He’s one of those rare people of intellectual depth combined with a deeply pastoral heart. I am, we are, blessed to have him as a colleague and pastor in this Synod.”

“If you want a natural analogy to evil,” Gary says, “cancer is the ticket.”

It’s deceptive, he says. It morphs and changes.

“Evil does the same thing,” he says. “But the thread by which I hang is Luther’s theology of the cross. What makes the difference is that Jesus is part of human suffering. God is with us. Through the agony of the cross, God becomes credible to humans. God says, ‘I am in the madness with you.’

“The other part of that thread is the resurrection, in a new heaven and a new earth. There’s a transformation in the followers of Jesus. That is the thread that keeps me from sliding to the dark side.”

“This is about Gary not being in control,” Linda says. “Cancer reminds us that we’re not ultimately in control.”

At this point, Gary says, “the cancer is moving fairly slowly, but it remains on the march.  Who knows what trajectory it will take? It’s a rare cancer. Very seldom do they find it in geezers like me. But let’s see what works.”

Gary will offer his body for medical research.

“This is my last way to give,” he says. “This is the last way I can kick cancer in the butt. It’s an uninvited bastard in my life. I’m just not willing to give anything.”

Still, he says, medicine has helped lessen the side effects of treatment.

“I hope this might be a sign of encouragement to people,” Gary says. “It is endurable. There are dark days and dark moments, but there is healing, and moments of light as well. We do need to be rescued from evil, because it is bigger than we are. My confidence is not in my abilities, but in the abilities of the one who makes all things new.”

A caravan of holiday memories, old and new

By Hugh Fisher hugh.fisher@salisburypost.com SALISBURY — It’s beginning to look a lot like Christmas. For a couple of hours Wednesday... read more