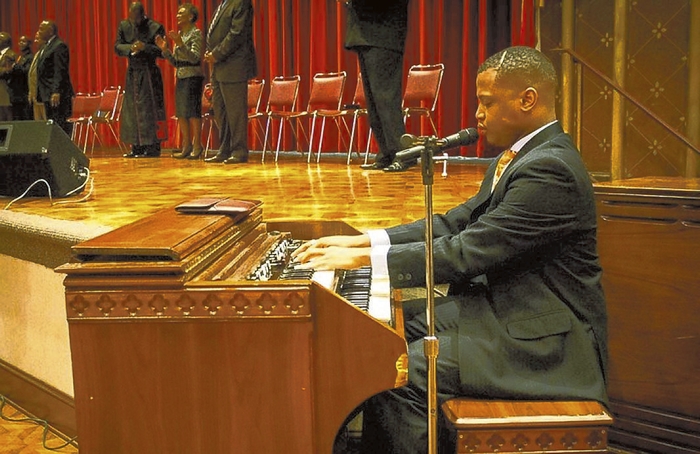 Tyquan Alston plays the piano and sings. A Livingstone College senior, Alston said this year’s production of ‘Miracle on Monroe Street’ will be bittersweet, because it will be his last. Submitted photo

On Dec. 5, members of the public will get a chance to watch Alston sing and act when he participates in “Miracle on Monroe Street” at 7 p.m. inside Varick Auditorium.

This will be Alston’s last time participating in the annual Christmas Extravaganza at Livingstone, which has become a staple for many in Salisbury as a way to jump start the holidays.

“It’s bittersweet for me this year,” said Alston, who expects to graduate in May 2016. “It’s always bittersweet when it’s your last time. I’ll miss being a part of what has become a successful event at Livingstone.”

In “Miracle on Monroe Street,” Alston will perform a duet with fellow senior Kenneth Hart, a sport management major from Miami. The two tenors will sing “Miracle” by Donald Lawrence and will also portray siblings in the show.

“I’m supposed to be the younger brother who’s spoiled and thinking only about technology and what expensive gadgets I can get for Christmas,” Alston said. “In one of the early scenes, Kenneth’s character tells me that Christmas isn’t about gifts but instead it’s about the celebration of the birth of Jesus Christ and that He’s the reason for the season.”

Alston said he likes the script, written by Curtis Dean, an assistant professor of business who has served as musical director on Broadway for several productions.

“I think it’s good because the message that Jesus is the reason for the season never gets old,” Alston said. “We all need that reminder that it’s not about Louis Vuitton or Michael Kors, material stuff that’s going to pass away. Putting your hopes in that isn’t what we should be doing.”

Alston, who said he still gets nervous before singing, particularly when he’s not singing behind the piano, said this year’s Christmas Extravaganza won’t disappoint.

“I believe it’s going to be really nice because it will encompass different entities of the school and also will include community participation by way of The Salisbury Symphony,” Alston said. “I think the public is in for a treat.”

Miracle on Monroe Street will also include a new twist this year as Livingstone students Ashley Hall, Gabriella Hunter and Deonte’ Kennedy perform with Symphony members while playing the flute and piccolo, the clarinet and the trumpet, respectively.

Also new this year, a “band” comprised of Livingstone Organist Dr. Walter Bragg, Director of Bands Anthony Jones, Communications Project Manager Justin Walker and Demond Corry, a local musician, will perform. Bragg will play the piano, Jones will play the trumpet, Walker will play the bass guitar and Corry will play the drums.

“We couldn’t produce our Christmas Concert without our students, from those who study under Michael Connor in Tubman Little Theatre, to those who work with Mr. Dean to those who sing or play musical instruments,” Miller said. “They are an invaluable part of the production, and I appreciate the hard work they’re doing as we rehearse and prepare to delight the public.”

“I’ve seen Ms. Gray and the students perform, and I’m confident they’ll add a special touch to this year’s show because they’re awesome,” Jenkins said. “I’m thankful to the students who will dance and to all of the Livingstone students who are doing their part to ensure we provide an exceptional show at a nominal price for the public to enjoy. I hope Varick Auditorium is filled on Dec. 5 for ‘Miracle on Monroe Street,’ a must-see production.”