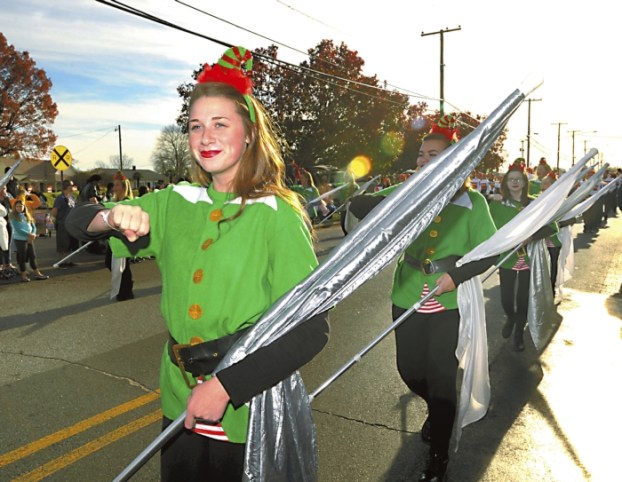 Landis native Arthur Abernathy, 60, and his family and neighbors saved their favorite spot by parking their trucks and other vehicles on South Main Street in Landis at around 8:30 a.m.

“This is our family tradition. We come up from the neighborhood and park the vehicles early,” Abernathy said.

He and his family sit in the same spot every year.

“That’s where we stay together and cut up,” Abernathy said.

The streets were lined with people following their yearly traditions in Landis and China Grove by coming out to watch the Southern Rowan Christmas Parade on Tuesday.

The grand marshal was the 2015 Rowan County Little League Softball Team, winners of the World Series.

Some people set up chairs and blankets by the street while others sat in the back of their cars to watch the parade go by.

Children crawled in the streets to get every piece of candy the parade participants threw. Many came prepared with bags to carry all of the candy they collected. There were also Frisbees and foam footballs tossed out to the crowd.

Abernathy brought bags of popcorn and Cheerwine punch to enjoy the floats. Many others brought their own food, but for those who did not, there were vendors selling cotton candy, candy apples and funnel cakes.

Vendors were also bringing the products to the people by wheeling carts of balloons, toys and food up and down the street.

Abernathy said when he was a teenager he used to be one of those vendors.

“We would sell candy apples and popcorn with the Beaver’s concessionaries. We used to walk and have buggies and all that like there was in the old days,” he said.

Abernathy said a lot more people come to see the parade than in those old days. Many people came to see their family and friends who were participating in the parade, and others brought the young children of the family to see Santa Claus.

“It’s just a community event where you see the people that you don’t get to see every single day,” Faggart said.

Abernathy said the parade is like a gift for the town.

“It’s kind of like the town giving back to the people,” he said.