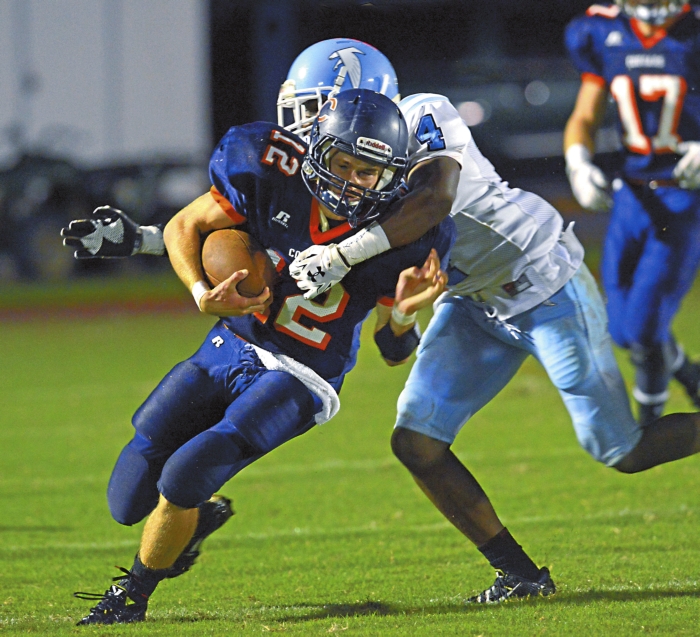 Wayne Hinshaw/for the Salisbury Post ... West Rowan linebacker Theo Fisher (4) makes the tackle of Carson’s Andy Lear (12) during the game earlier this season at Carson. The Falcons won that game, 28-7. Fisher was the Post’s Friday Night Hero for his play last week against West Henderson and will lead West into its game against Belmont South Point in the third round of the state playoffs on Friday night.

MOUNT ULLA — Theodore “Theo” Fisher will be a one-and-done senior with West Rowan’s football program, but he’s making his single season in light blue count.
Fisher (5-foot-11, 190 pounds) is a “walk player” or walk-up linebacker in the Falcons’ defensive scheme. Essentially, he’s an outside linebacker. His assignment usually is containing or stopping running plays to the edge, but he also has to identify pass plays quickly and assume coverage responsibility.
In Friday’s second-round playoff game at West Henderson, Fisher identified a pass play correctly. He made a 22-yard interception return for a touchdown early in the fourth quarter that provided a 34-7 lead. Coach Joe Nixon credited that play with sealing West Rowan’s 41-19 victory.
“Our coaches had told me to back up a few yards, and I listened to them and got the pick,” Fisher said. “The play was a halfback pass, and (linebacker) L.J. Robinson got a lot of pressure on the kid with the football. He panicked a little bit, threw the ball, and I was right there. Then I just had to follow the blocks.”
Fisher was born in South Carolina, but he moved to Texas when he was 7 years old.
He made numerous big plays as a safety for Karen Wagner High in San Antonio in 2013 before returning to the Carolinas. The 2014 football season was over when Fisher enrolled at West Rowan for the second semester of the 2014-15 school year.
“My grandfather went to West Rowan and I have family in the area, so I knew this school would give me a warm embrace,” Fisher said. “I signed up for the weightlifting class. That’s where coaches noticed me. They asked me if I’d be interested in playing football. I spoke up and told them I’d been playing a long time.”
Nixon said Fisher has fit in well with new teammates.
“For a guy new to the program, he’s been a very big addition,” Nixon said. “He does a good job as a walk player. He’s physical against the run, and he’s also good in pass coverage. Plus, he’s a big part of all our kicking-game stuff.”
Fisher made it easy for his teammates to accept him and for fans to like him. He made one of the biggest plays of West’s regular season when he returned a second-quarter fumble 27 yards for a touchdown at Robinson when the Falcons were trailing 7-0. That play sparked the Falcons to a 28-21 victory. That game was the SPC opener for the Falcons, so Fisher’s fumble return may have changed the course of West’s season.
“I remember it was a third-and-long play, they ran the ball, and Devin Turner hit the ballcarrier and knocked the ball loose,” Fisher said. “I picked it up on the run. We work a lot with Coach (Tim) Dixon on scoop-and-score plays. He wants us to be prepared when we have a chance to make a big play. It paid off.”
Scoring on defense is something the Falcons (10-3) practice hard and do well. They’ve scored six defensive touchdowns this season, including two each by Fisher and Robinson. Malcolm Ingram and Jai Hogue have the others.
“Whenever you can score on defense, a spark is lit in the whole team,” Fisher said.
Throw in five special-teams TDs, including the kickoff return by Jovon Quarles that opened Friday’s game, and that’s 11 touchdowns scored by the Falcons when the offense wasn’t on the field. That’s a big reason why this season will extend past Thanksgiving. This is the Falcons’ first trip past the second round since they were state runner-up in 2011.
The challenge for Fisher and West Rowan is huge on Friday. The sixth-seeded Falcons travel to play second-seeded South Point (11-2) in Belmont.
West battered South Point in Mount Ulla in 2008, a monumental 35-7 regional final victory that was a stepping stone to the first of three straight state championships.
South Point avenged that loss with a 28-7 win in Belmont in a first-round meeting in 2013, although the underdog Falcons scored first and were still locked in a 7-7 struggle at halftime.
South Point has won 10 straight since losing to Shelby and is always one of the best when it comes to triple-option offense. The Red Raiders have amassed 476 points this season. Even with all those special-teams and defensive scores, the Falcons have scored 369.
After watching film of South Point, Fisher isn’t in awe, but he’s impressed.
“What stands out is how much intensity they play with,” Fisher said. “Their effort is great, but we have to step up and match their effort and try to out-do it.”