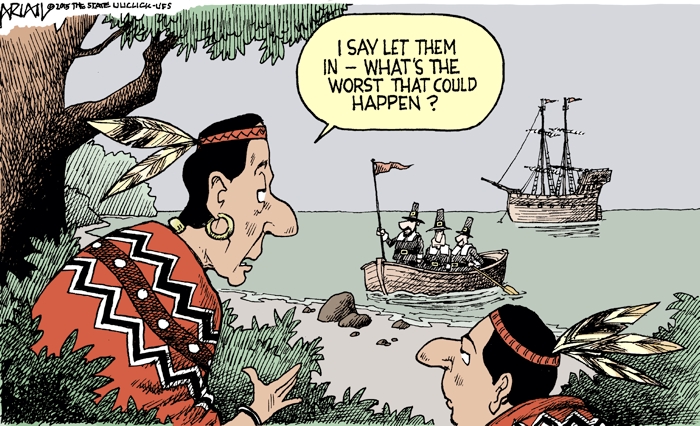 Last week’s vote by the House of Representatives to impose additional restrictions on the admission of Syrian refugees into the United States was a bad idea.

It feels like a not-very-well-considered overreaction to the shocking terrorist attacks in Paris on Nov. 13. Overreaction rarely results in good policy, and it’s deadly to perspective and to the facts.

For example, Republican presidential candidate Donald Trump’s position was clear and emphatic: An absolute “no” to the 250,000 Syrian refugees who President Barack Obama wants to admit. Actually the number is only 10,000, and only a small percentage of those are males of military age. So much for facts.

And perspective? Canada has committed to accepting 25,000 Syrian refugees, and Germany may absorb 800,000 by the end of the year.

Further, since the 1970s, America has welcomed 1.3 million immigrants from Vietnam; few would argue that they have not been a splendid asset.

As we say often, we are a nation of immigrants, and our reluctance to accept refugees from Syria undermines that welcoming, humanitarian history, as well as our international leadership among Western nations that appear to be more compassionate than we are.

The position of those who oppose accepting Syrian refugees _ including a majority of state governors _ isn’t entirely irrational. The Paris attacks are a sobering reminder of the danger of terrorism.

Further, the bill passed by the House last week does not bar Syrian refugees; it merely requires that the director of the FBI, the secretary of Homeland Security and the director of national intelligence certify that each refugee from Syria or Iraq is not a terrorist. How much of an obstacle this legislation would add to the current 18-month vetting process is uncertain.

But objection to accepting Syrian refugees is divided into three parts: fear, politics and prudence. I’ll let you assign the proportion of each.

Clearly, though, politics is at work here in a big way. Nearly 50 Democrats voted for the House bill, but, by far, the most outspoken objectors are Republicans, particularly the presidential candidates, who recognize that they are well-served by nearly any measure that makes Obama look bad or that encourages a sense of crisis and fear.

The fear, of course, is legitimate. What happened in Paris — and in Mali a week later — could happen anywhere, including the United States.

The proper response to fear, however, is prudence, rather than panic. No one is suggesting opening our nation to a flood of Syrian refugees that might include a few terrorists. But when legitimate refugee status can be reliably established, the U.S. should do its share to help alleviate the suffering.

After all, we’re talking mostly about women, old people and children, who without help are likely condemned to a miserable, short life. Rejection is an odd position for a putative Christian nation. In fact, I think Jesus said something like, “Let the little children come unto me.”

Of course, the safest course is to keep everyone out. But here’s another good reason to accept the Syrian refugees:

The only solution for the Islamic State is its richly deserved extermination. In a more just world, the Islamic State’s Muslim neighbors would solve this problem. In our world, significant numbers of American troops will likely be required. Republican presidential candidates are already calling for ground troops. Democrats are more deliberate, but only one Paris-style attack on American soil stands between us and a new war in the Middle East.

It will be easier to win this war — though at great cost and with much spillage of blood — than to sort through the chaos that will follow it. The Muslim world will still be deeply fractured. In fact, another war in the Middle East is unlikely to solve the long-term problems, and in many respects, the world’s conditions may look worse after the war than before.

So strong moral leadership will still be called for to put the world back together. It would be a shame if we squander our claim to moral authority and compassionate humanitarianism just to keep 10,000 desperate Syrians out of our country.