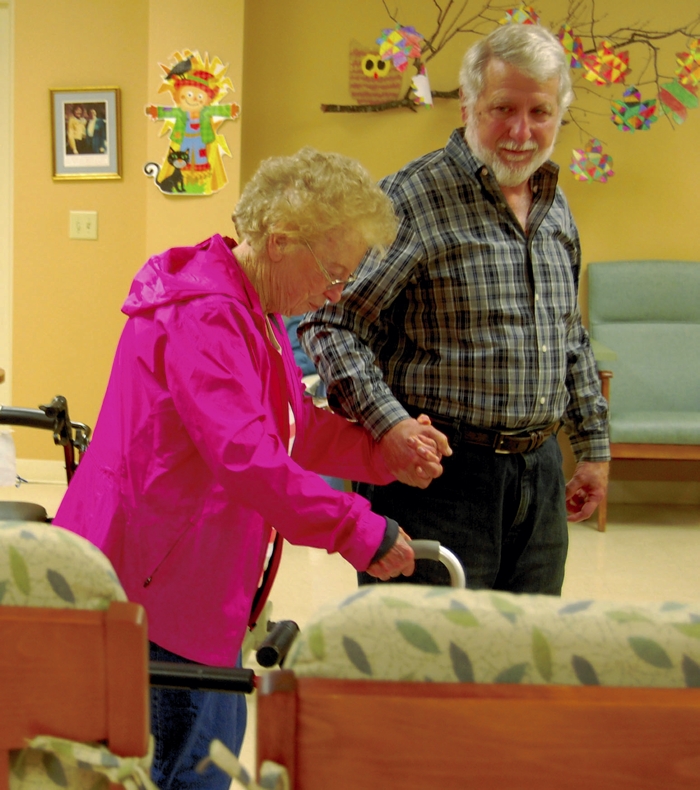 Keith Corriher at Trinity Living Center with his mother, Virginia.

Keith Corriher says he wishes he had known about Trinity Living Center sooner.

Corriher’s mother, Virginia, has Lewy body dementia and can no longer safely live on her own. Keith and his brother, Barry, have moved in with Virginia and serve as her co-caregivers. The two brothers also hold down jobs – and that’s where Trinity Living Center comes in.

In July, Virginia Corriher began attending Trinity Living Center two days a week. Those two days allow her sons to continue to take care of her at home and still be able to meet the responsibilities of their jobs.

Open Monday through Friday from 7:15 a.m. to 5:15 p.m., Trinity Living Center, 1416 S. Martin Luther King Jr. Ave., is a United Way agency operated by Lutheran Services Carolinas that offers day services to adults who need care due to health or mobility issues, including dementia or other disabilities.

At a very basic level, Trinity Living Center (also known by its very appropriate abbreviation, TLC) meets participants’ physical needs, providing hot food and even bathing services when requested. Certified nursing assistants and a registered nurse monitor participants’ conditions and administer medication. For participants who have mobility issues, transportation to and from the center is available.

But Trinity Living Center meets much more than physical needs: it takes care of the whole person. It’s a place where people can socialize with friends, old and new. It’s a place to create art, tell stories, receive hugs, become energized, or to enjoy the fresh air outside but still be in a secure environment. It’s a place to engage and interact for people who may otherwise be lonely and isolated.

It’s a place where the staff members make it a priority for participants to experience moments of joy every day.

“They are not only extremely professional but they also show tremendous love and care,” Corriher says. “My mother loves to go there. As soon as she gets to the door and sees the person who greets us, she gets the biggest smile on her face. I can’t say enough for the work that they do with my mom. It’s truly a mission.”

Corriher says that while dementia has taken away some of his mother’s social skills, she has had improvements in her speech and her ability to interact socially since coming to Trinity Living Center.

Staff members sometimes describe their work as a calling, and it shows. Earlier this year, TLC held its first Wish Upon a Star ball. Participants got to dress up and have their hair and makeup done by volunteers and dance to a live band. Such events provide a compelling glimpse into how passionate staff members are about enhancing the quality of life for the program’s participants, and how TLC feels like a family.

TLC Executive Director Christina Joyce began working in the finance department for Lutheran Services Carolinas in 2007. After her husband had a life-changing accident that caused him to need a lot of care for a time, Joyce was plunged into the world of caregiving. “I developed a whole new appreciation and respect for all of LSC’s direct care staff,” she says. She felt called to pursue something other than her desk job in finance. In 2013, she joined the staff at TLC.

Joyce’s job is a mix of business management and daily human interaction. She loves being “right in the mix of the day-to-day lives of those we serve.”

Trinity Living Center would not be able to offer the care it does without the United Way, which provides about $43,000 of the center’s annual budget. Those funds are hugely important for TLC, which operates on a shoestring budget and often doesn’t break even. But whether it’s profitable or not, Lutheran Services Carolinas considers TLC an important part of its mission, says LSC President Ted Goins.

The cost for many participants is covered by the Community Alternatives Program (CAP) through Medicaid, The Family Caregiver Support program, scholarship funds, the Veterans Administration, and the Department of Social Services. Private pay rates range from $57 to $67 per day – a bargain, especially if it means avoiding or postponing home care, which can be costly and doesn’t offer the social benefits that Trinity Living Center can provide.

“He just loves it there,” Tart says. “He loves to talk to people, and he hates to sit around the house.”

Like Tart, Keith Corriher also appreciates the opportunities for social interaction available at the center.

He arrived at TLC one day to take his mother to a medical appointment, and students from Salisbury Academy were visiting. One young girl was reading his mother a book, and the sight melted Corriher’s heart.

“I didn’t want to interrupt that,” he says, so he waited until the first-grader finished the story, even though he knew it might make them late for their appointment.

His mother has good and not-so-good days, Corriher says. But since coming to TLC, he adds, “she has more good days.”

For more information about Trinity Living Center, or to schedule a free day to see if TLC is a good fit for you and your loved one, call 704-637-3940 or email contactus@trinitylivingcenter.net