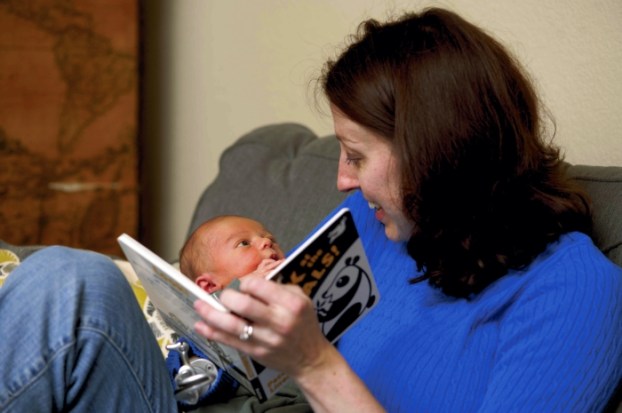 Kelli Brentnell reads to her 2-week-old son James Walton “Walt” Brentnell at their home in Salisbury on Monday. Kelli and her husband Jonathan took part in the Rowan Reads program and started reading books to the baby even while he was forming in utero. Jon C. Lakey/Salisbury Post

Rowan Reads to Newborns aims to start literacy at birth The Rowan Reads to Newborns program sends new parents and their infants home with a reusable tote bag that contains one high-contrast board book, an application for a library card and facts and tips for reading to newborns.
Jon C. Lakey/Salisbury Post

James Walton Brentnell, or Walt, is 2 weeks old, but it’s never too early to teach him to read.

“Babies develop language as early as being in utero,” his mother, Kelli Brentnell, said.

Kelli says that she and her husband, Jonathan Brentnell, love to cuddle up with Walt on the couch or in the nursery and read to him.

“It’s very calming for him, very soothing,” she said.

Brentnell says that her little family reads together whenever they can — and they began doing this before Walt was even born. Kelli said that while she was still pregnant, they’d read to him from baby books or during nightly devotions.

“I’m a teacher, so reading is very important to me.” Brentnell said.

Walt is lucky to belong to a family that believes in the importance of literacy and is able to provide him with a small library of board books. But not every newborn is so fortunate. That’s why the Rowan Public Library, Smart Start Rowan and Novant Health have begun a county-wide collaboration to ensure that every baby born at Novant Health Rowan Medical Center begins life with a book.

Called Rowan Reads to Newborns, the program is sponsored by donations, but it wasn’t an overnight thing, Jane Welch from the Rowan Public Library said.

“With any program that you start, funding is a problem.”

Welch says that she approached the hospital as early as 2011 to start this program, but it didn’t fully take off until 2014 when it garnered community support and received donations that will keep it funded for the next two years.

Now, Rowan Reads to Newborns is able to provide each new mother with a reusable tote bag that contains one high-contrast board book, an application for a library card and facts and tips for reading to newborns.

The board books are full of high-contrast, black-and-white illustrations that are designed for children from birth to 3 months old.

“Children can see this. It’s very easy on the eyes. They can focus on this,” Welch said.

The books are also easy for parents. Whether they’re learning to read to their first child, or have low literacy levels themselves, the books are simple and allow parents plenty of room to make up stories using the pictures. And it’s vitally important for a parent to be invested in their child’s literacy.

“Ultimately, the parent is the child’s first teacher,” Welch said.

Studies have shown that children who are spoken, read or sung to often while in the womb have higher vocabularies and word acquisition than those who aren’t, Welch said.

“Without language, a child can’t express themselves.”

But it’s only through hearing unfamiliar words that a child can build their vocabulary. That’s where the books, and the parents, come in.

These are basics of reading, listening and language acquisition that can never be taught too early, Welch explained.

Ultimately, Welch says, reading to your children as they age is preparing them for school, and for life. Picture books have conflicts and solutions, characters to remember and settings that give children a purpose for listening. So when children arrive at school, they’re ready — for class, and ready to read.

“Because if we wait, it’s too late,” Welch said.