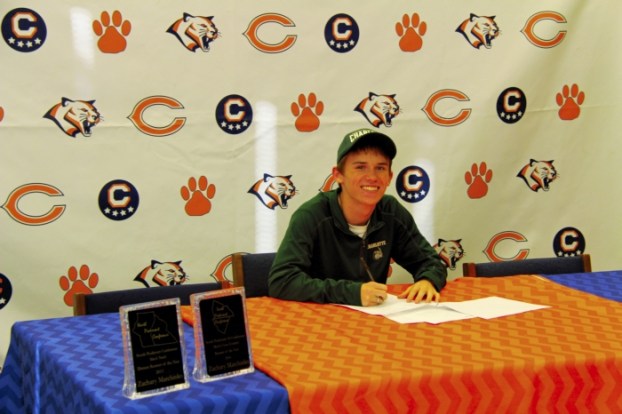 CHINA GROVE — Carson standout Zachary Marchinko signed with the Charlotte 49ers recently, bringing to a close a hectic period that included his bout with a severe illness.
“It was tough for a while,” said Marchinko, who will compete in the three sports for the 49ers — cross country, indoor track and outdoor track. “But it’s better now.”
Marchinko missed the 3A cross country state championships in Kernersville on Nov. 7. When Marchinko misses a race, you know he’s probably in a hospital bed.
He got sick shortly before the Cougars were scheduled to compete on Halloween in the 3A Midwest Regional at Charlotte’s McAlpine Greenway Park.
“I had a bacterial sinus infection, and then I had a bad reaction to the antibiotic I took for the infection,” Marchinko said. “The morning of the regional I felt hot and I had the shakes and shivers. My mom took my temperature. It was 103.”
He ran in the regional, anyway, because cross country is a team sport. The Cougars were having a great season — county and South Piedmont Conference champs — and he was determined to help his team qualify for the state meet.
“I decided to run the race, and we did qualify,” Marchinko said.
He was well off his usual time, but he still ran 16:27, finished eighth and made the all-region team.
But he wasn’t physically able to compete in the state meet. The Cougars have a strong team. They finished ninth without Marchinko. Had he been healthy, they would have pushed for a top-five finish.
“It was tough not running in the state meet my senior year,” Marchinko said. “But it is what it is.”
He’s had a tremendous multi-sport prep career, combining track distance and middle distance events with his cross country achievements. As a junior, he was named the Post’s Runner of the Year for cross country as well as Athlete of the Year for track and field. He placed second in the 3200 in the 3A Track and Field Championships last spring.
“Zachary is not afraid of the big races,” said Bob Marchinko, who performs double duty as Zachary’s father and Carson’s coach. “The better the competition, the faster he is.”
Marchinko was second in the state cross country meet as a junior. He won the SPC Championships as a junior and defended his conference title this season in a sizzling time of 15:22. He had to run that fast to beat Hickory Ridge’s Alex Cornwell by a fraction of a second. Cornwell will continue to provide friendly competition for Marchinko. He also signed with the 49ers.
While he stands only 5-foot-7, Marchinko has been equally dynamic in track and field.
At last spring’s Rowan County Championships, he won the 1600 and 3200, ran on the winning 4×8000 relay team and ran on a third-place 4×400 team.
In the SPC Championships, he was again a huge factor in the maximum four events — first in the 1600, second in the 3200, third in the 800, second in the 4×800.
“His greatest attribute is his competitiveness,” Coach Marchinko said. “He hates to lose, and Coach (Chris) Cauble says that even carries over to his P.E. class.”
Marchinko’s college decision came down to three in-state schools — Appalachian State, East Carolina and Charlotte.
It was tough to turn down East Carolina.
“I took an official visit to ECU right before the signing period, went to a football game and really enjoyed it,” Marchinko said. “But even after I saw ECU, Charlotte felt like the right place.”
For one thing, Charlotte is a lot closer.
“When I visited there, I was able to spent two days with the team, and it was just a great atmosphere,” Marchinko said. “I really like Coach (Alex) Gibby and I like his vision for the future.
Charlotte was a regional cross country qualifier this season under Gibby, who is also the 49ers’ distance coach for track and field.
“Doing three sports, I’ll stay busy,” Marchinko said. “I’ll be a running a lot, but that’s what I love to do.”