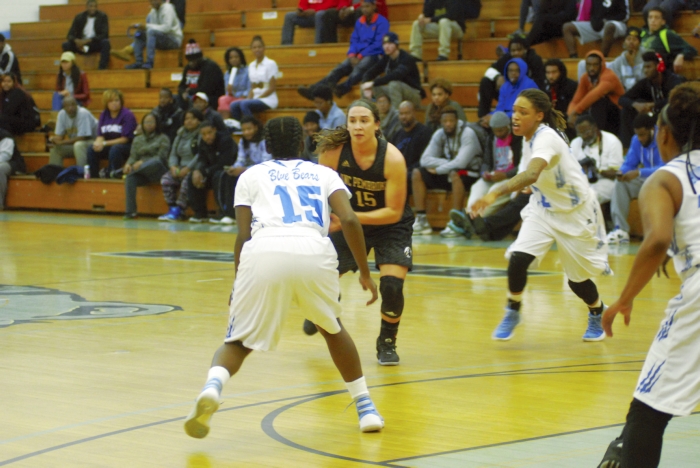 Dennis Davidson/Salisbury Post...UNC-Pembroke’s Avery Locklear (15) dribbles into the lane and is defended by Livingstone’s Kanesha Lankford (15) and Amber Curtis, right, last night at New Trent Gym. Livingstone won the game, 69-68, with a big rally in the final three minutes.

The Blue Bears trailed for most of the second half and by 12 points (65-53) with 3:17 remaining in the contest. Taylor Daniels knocked down two free throws at that point, and the home crowd, sensing a comeback, got louder.

Livingstone (2-0) outscored the Braves, 14-3, in the final three minutes, as the visitors were obviously bothered by the full court press and loudness of the gym.

The Blue Bears had only seven players in uniform, as several players are sidelined by injuries, but the press sparked the comeback.

“The ladies just kept fighting,” said Livingstone coach Anita Howard. “Our numbers are down but we just had to push through it. Basketball is game of momentums and we just seemed to get the momentum last and got the win.

“I was a little nervous that we had to press so long with just seven players, but the girls really came up big,” continued Howard. “We have been doing a lot of running at practice because we do like to pressure teams, and it paid off tonight. We got into some foul trouble early by pressing, but it worked out for us.”

UNCP coach John Haskins was disappointed that the lead slipped away from his team.

“We’ve just got to play with more poise than that,” Haskins said. “Livingstone kept coming at us and we just didn’t respond very well. We missed layups and fouled too much down the stretch. But give Livingstone credit, they kept battling back and made some plays.”

The Blue Bears’ win ruined the homecoming of UNCP’s Avery Locklear, a star at South Rowan High School and 2015 Rowan County Player of the Year. Locklear knocked down a jumper with 6:10 left in the third period to give the Braves a 37-35 lead, but that was her only field goal of the night.

Locklear started and played 25 minutes but was 1-for-7 from the floor and missed two of three free throws before fouling out with 17 seconds left and UNCP clinging to a 68-67 lead.

Locklear’s teammate, Lashonda Prichard, had turned the ball over and in attempt to get it back, Locklear fouled Kyala Searcy of Livingstone. Searcy calmly sank both free throws for a one-point lead.

The final hectic 17 seconds saw a missed layup by the Braves’ Jasmine Huntley, a rebound by Daniels and a turnover by Searcy. With just two seconds left, Huntley turned it over in her haste to get off a last shot.

Livingstone’s Amber Curtis was 9-for-30 from the field and made seven free throws to lead all scorers with 28 points. Daniels had 12 points to go along with 16 rebounds while Searcy had 12 points and 10 boards.

Huntley led UNCP (2-1) with 25 points, but had five of the Braves’ 20 turnovers. Chandrica Fuller followed with 14 points and Prichard had 13.

The new four-quarter system is being used by women’s college basketball this season and UNCP led after three periods, 53-47. After falling behind even further, the Blue Bears made their run midway through the final frame.

A key to the comeback was a clutch three-point field goal from Curtis with 1:20 left, cutting the deficit to 66-63. Toxiana Wilson had a steal at half-court and drove in for a layup with 34 seconds remaining to make it 66-65.

Huntley had two free throws for UNCP at the 31-second mark, before Wilson cut it to one point again 10 seconds later on a follow shot.

“UNC Pembroke is a good team, so this was a solid, team victory,” said Howard.

Livingstone returns to action on Dec. 2 with an 8 p.m. contest at Catawba. The Catawba men play first that night, against Chowan at 6:00.

Notes: Officially, Locklear is averaging 6.3 points in three games, but scored 16 and 12 points, respectively, in exhibitions against Division I opponents Campbell and UNC Wilmington … “Avery is doing well,” said Haskins. “She’s a great kid and is really working hard. She didn’t shoot the ball well tonight but the first three times against outside competition, she shot it very well. She’s the whole package and we’re very fortunate to have her.”