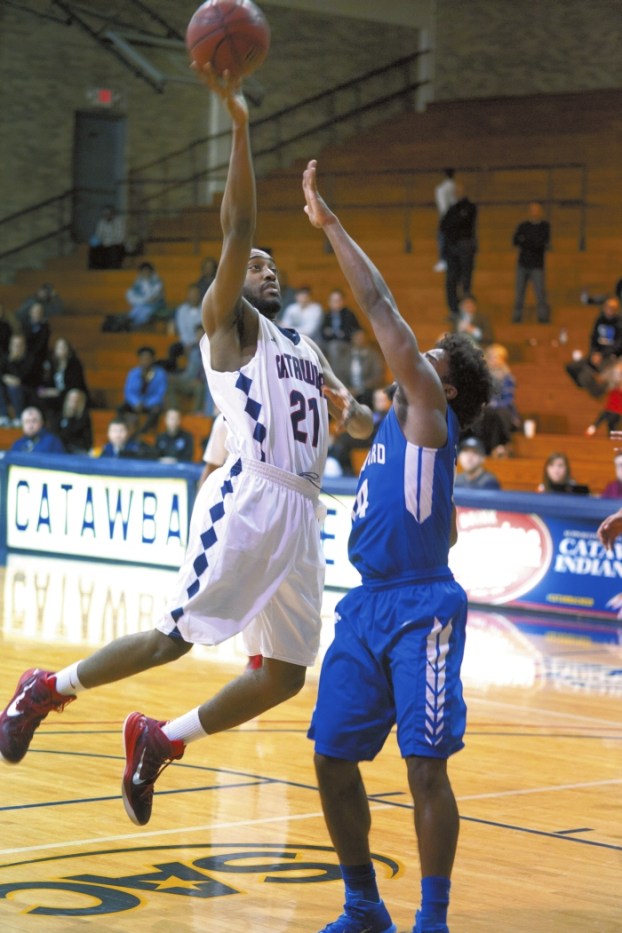 SALISBURY — Catawba headed for the Thanksgiving break with a 70-63 South Atlantic Conference win against Coker, and sophomore Jameel Taylor knew the Indians had plenty to be thankful for.
“Thank goodness,” said Taylor shaking his head, “that Coker didn’t have two more minutes.”
Catawba (1-3, 1-1 SAC) led by as many as 25 points, but the Indians were hanging on by their fingernails at the end because Coker star Donte Samuels scored 23 of his 31 points in the second half.
“He was half their offense and we were letting him catch it too easily and letting him go baseline too easily,” Catawba coach Rob Perron said. “Let a guy catch it in the post and go baseline, and there’s no help. Your help is in the middle.”
Things couldn’t have gone any better for Catawba in the first half, and the Indians piled on the cold-shooting visitors for a 41-22 lead.
Rakeen Brown made two early 3-pointers as Catawba surged out of the gate 10-2. Jerrin Morrison crushed one of his special dunks over two defenders for an 18-8 lead.
Coker’s Cobras (3-1, 0-1 SAC) went 0-for-10 on 3-pointers and shot an ugly 22.6 percent for the half, while the Indians were shooting a sizzling 53.8 percent.
“Playing defense that first half in front of our bench really helped us,” Perron said. “In terms of energy, enthusiasm and communication, that was worth a lot of points.”
Taylor was absolutely perfect in the half — 3-for-3 from the field, 2-for-2 on 3-pointers and 2-for-2 on free throws. Besides zero misses, Taylor’s stat line showed zero fouls and zero turnovers.
“Taylor played a flawless half,” Perron said. “And we started two seniors (Julian Sampah and Vismantas Marijosius) who got us off to a solid start and helped set the other guys up.”
Needless to say there was a Coker run coming at some point.
The Cobras tried to surge early in the second half, but Catawba regained momentum on a dunk by Sampah and a great play by redshirt freshman Jeremy McLaughlin, who blocked a shot on one end of the floor, and then slam-dunked to finish the fast-break opportunity created by his block.
When Marijosius scored on a tip-in with a little over 10 minutes left, Catawba’s lead was 63-40, but those last 10 minutes seemed to last forever.
Samuels heated up, and Catawba contributed to Coker’s comeback with 11 second-half turnovers. The Indians had only four turnovers in the first half.
“Losing most of that big lead was self-inflicted,” Perron said. “We had three or four charges. It’s great to go hard to the rim, but we needed a little more savvy.”
Catawba’s advantage melted from 23 to 20 to 15 to 10, and finally to six. Coker had possession, down six, with 1:39 left, but that’s when Catawba freshman Malik Constantine, playing with four fouls, took a charge. That may have been the biggest play of the game.
Twenty-two seconds later, Brown got the ball inside to Constantine, and he powered in a layup for Catawba’s first field goal since the 6:43 mark. That was the clutch bucket the Indians needed to survive.
“Things haven’t gone our way early in the season, but the mindset was to play with confidence tonight, and we got a win that the team needed very badly,” Taylor said. “It’s a great way to go into a break.”
Catawba hosts Chowan on Dec. 2 at 6 p.m.