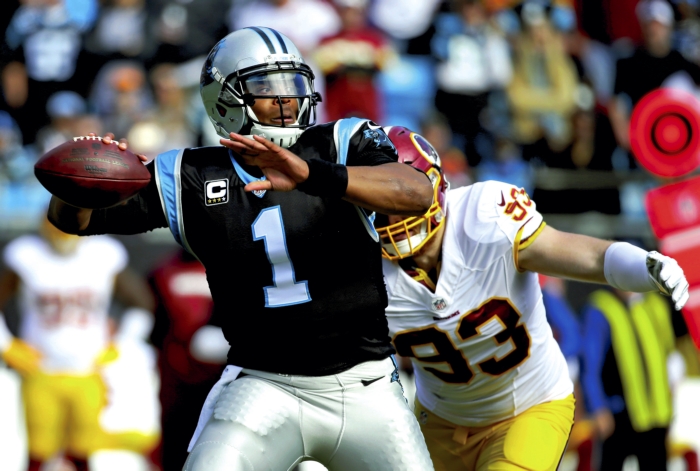 CHARLOTTE (AP) — Cam Newton has never liked being referred to as a running quarterback.

“I have labeled myself as a pocket passer with the ability to run,” Newton said.

Newton proved again he can beat teams with his arm, throwing a career-high five touchdown passes on Sunday and the Carolina Panthers improved to 10-0 with a dominating 44-16 win over the Washington Redskins.

Newton completed 21 of 34 passes for 246 yards and threw TD passes to five different receivers as Carolina stretched its regular-season win streak to 14 games, including eight straight at home.

The Panthers opened a four-game lead in the NFC South over Atlanta and became the 16th team in the Super Bowl era to start 10-0.

Of the previous 15, all made the playoffs and nine have advanced to the Super Bowl, with six winning it all.

All of that matters little to tight end Greg Olsen.

“They don’t give out trophies for the regular season,” Olsen said.

They forced five turnovers leading to 27 points, had five sacks of Kirk Cousins and established a franchise record by holding the Redskins to 14 yards rushing on 12 carries.

“Between the fumbles and the picks, we had a couple short fields,” Olsen said. “You’ve got to take advantage of them. We didn’t sit on them. I know we scored a lot of touchdowns, and that’s obviously what you’re looking for.”

Newton became the first Carolina quarterback in franchise history to throw four TD passes in the first half as the Panthers jumped out to a 31-14 lead.

“He has a good command of what we’re doing out there,” Rivera said of Newton, who has 20 TD passes this season — four shy of his career high with six games left to play.

Andre Roberts had a 99-yard kickoff return for a touchdown for the Redskins (4-6), who’ve lost nine straight on the road.

Cousins finished 22 of 30 for 207 yards with one touchdown and one interception. He also fumbled twice on sacks. Running back Alfred Morris left the game early in the first quarter with a rib injury and did not return.

With the game tied at 14 in the second quarter, Newton led an eight-play, 92-yard touchdown drive, capping it with a 2-yard TD pass to Ginn.

The Redskins had a 74-yard interception return for a touchdown by cornerback Chris Culliver called back on the drive when officials ruled he had delivered an illegal helmet-to-helmet hit on Olsen before the interception.

The game turned from there with the Panthers scoring 30 consecutive points.

“That’s a 14-point turn right there,” Redskins coach Jay Gruden said. “The referee made a decision, made a call, and it’s not challengeable, so there’s really no use talking about it.”

On Washington’s next possession, rookie Matt Jones was stripped of the ball by Luke Kuechly and Thomas Davis recovered at the Redskins 24. Newton found Olsen on a crossing route for a 9-yard TD pass to push the lead to 28-14.

Kony Ealy had a strip-sack of Cousins on Washington’s next possession and recovered the ball at the Carolina 38 leading to Graham Gano’s field goal at the end of the first half.

Carolina’s momentum carried into the second half as Bene Benwikere sacked Cousins on the first play from scrimmage on a cornerback blitz, jarring the ball loose and recovering at the Redskins 20. Newton found Funchess for his franchise-tying fifth TD pass of the game to give Carolina a 38-14 lead.

With a game on Thursday at Dallas, Panthers coach Ron Rivera removed most of his starters early in the fourth quarter with his team up 44-14.

“They’re undefeated for a reason,” Cousins said. “It doesn’t just happen on accident. They have great players and a great scheme, and they have several players who’ve played in this system for several years. You see the fruit of that in how they’ve played this season.”

Washington’s loss comes one week after a 47-14 win over the New Orleans Saints.

NOTES: Roberts’ 99-yard kickoff for a touchdown was the first allowed by the Panthers in 100 games. … Olsen became the Panthers career leader in yards receiving by a tight end, passing Wesley Walls. … The Panthers have run for at least 100 yards in 21 straight games.