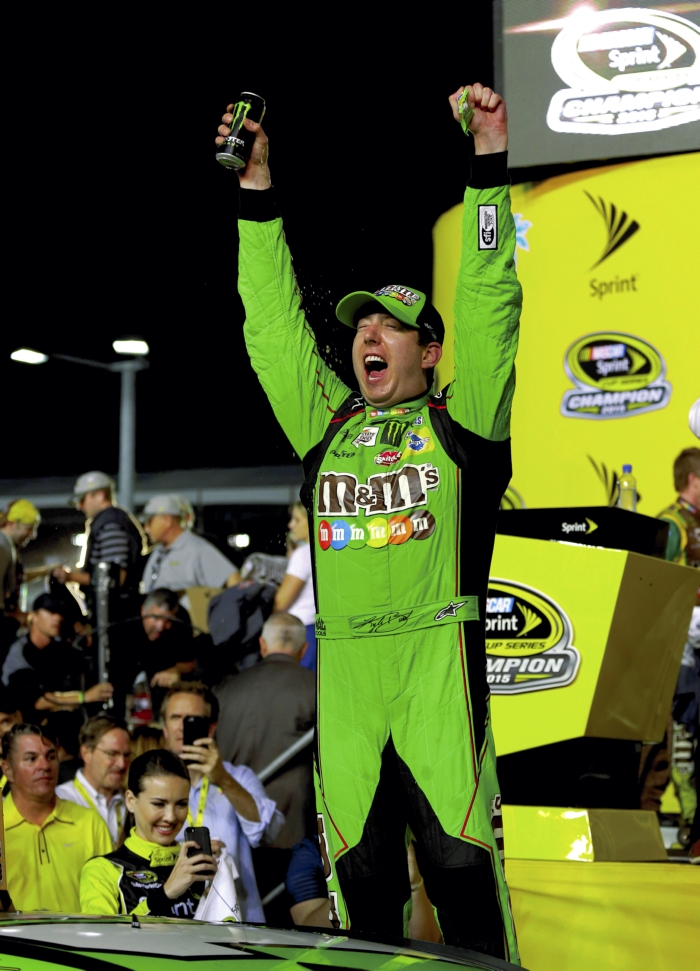 HOMESTEAD, Fla. (AP) — Kyle Busch watched the season opener from a hospital bed, his pregnant wife and his dogs by his side.

He ended the year in victory lane, hoisting the Sprint Cup with his infant son in the middle of a celebration.

Busch won his first career Sprint Cup title Sunday night, nine months after he crashed into a concrete wall the day before the Daytona 500 and broke his right leg and left foot in a wreck that forced NASCAR to make immediate safety improvements at almost all of the circuits.

Busch withstood multiple surgeries, went through a grueling rehabilitation program and missed only 11 races. He got back in his Joe Gibbs Racing Toyota in late May and NASCAR granted him a waiver to race for the title should he earn a berth in the playoffs.

“Going through the rehab, it was hard. It was really, really hard,” Busch said. “To just get vertical and get straight up and down, I did about three seconds and I was seeing stars. We just kept powering through and doing as much as we could, as quick as we could, and we were able to power through and get back.

“I said back then, I’ll say it again, the rehab and then getting back and getting focused was the hardest part, the hardest thing I’ve ever gone through. To put it all together here tonight, this night wasn’t all that hard.”

He won the season finale Sunday night at Homestead-Miami Speedway to claim the title, and knocked Kevin Harvick from his perch as reigning champion. Busch also denied Jeff Gordon a fifth crown in his final race.

“You always want to win, but I’ve learned not to be greedy,” Harvick said after his 12th second-place finish of the year cost him the championship.

There was a strong sentimental push for Gordon to go out on top in his final race. But he was only average all season, and that didn’t change Sunday night in front of a huge contingent of friends and family that included Formula One champion Lewis Hamilton and Mario Andretti, who both sat atop his pit box at the start of the race.

Gordon led nine laps early in the race and was third for an early restart but he bobbled it and plummeted to eighth. That was about as good as he’d be the rest of the race as he struggled mightily with the handling of his Hendrick Motorsports Chevrolet.

“Gosh, I’m a little disappointed, I’ll be honest,” Gordon said. “I thought going into the race we had something for them.”