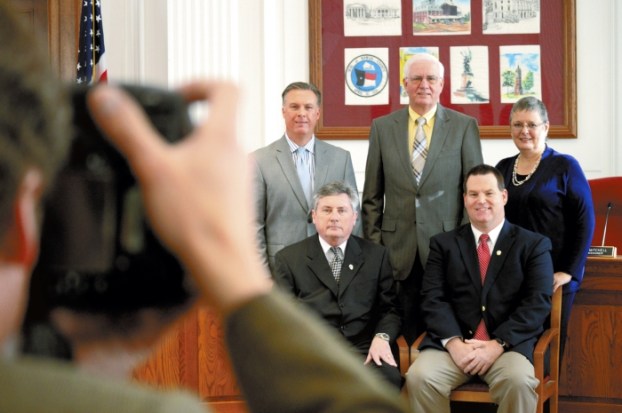 Rowan County Commissioners are unanimously upbeat about work completed since December 2014, when three new board members were sworn in. Economic development projects have undoubtedly been a focal point for the county’s leaders. Some started prior to the new commissioners, but several large projects wrapped up and just as many new ones began.

In fact, a list of accomplishments compiled by County Manager Aaron Church shows all goals set during a February planning retreat as completed or underway, which Vice Chairman Jim Greene cited as a sign of positive progress.

“I think that we, as a commission, have done a lot of what we set out to do,” Greene said. “Economic development was one of those things we felt was a cure to a lot of the ills in our community.”

A couple commissioners cited work accomplished during the previous year as a reason to re-elect Edds as chairman and Greene as vice chairman. Remaining commissioners were mostly indifferent about the top two county leadership positions.

“I’m fine with leaving Greg (Edds) and Jim (Greene) as chair and vice chair,” said commissioner Mike Caskey. “Everything is going smooth right now. I think we’ve been able to finish some projects that the old board started and there’s projects on the way that the new board initiated.”

“The way I look at it, Chairman Edds has done a good job,” Pierce said. “If he would like to continue as chairman, it doesn’t matter to me. I’m just there to do my job.”

Edds attempted to express a similar indifference to Caskey and Pierce, saying “I’m not campaigning for being chairman.” He did however say he would serve in the county’s top leadership position if elected.

When asked about work accomplished during the previous year, all commissioners mentioned economic development. Projects completed include: two developments at Summit Corporate Center on Julian Road and a significant overhaul of the county’s Building Inspections Department that’s aimed at rapidly increasing the pace of permit review. Commissioners have begun a potentially massive project to extend water and sewer lines for economic development into rural parts of the county. An airplane charter company has also announced its intentions to relocate its headquarters to the Rowan County Airport, which has become a focal point for future economic development.

Economic development doesn’t encompass all significant decisions in the previous year. Perhaps the most controversial decision by county commissioners was a vote to appeal a lawsuit over previous, sectarian prayer practices. County officials finalized policy changes at the Rowan County Animal Shelter and boosted its budget to more than $1 million for the first time.

After nearly two years of ownership, West End Plaza — formerly the Salisbury Mall — is nearing the start of construction on county offices. During the one-year tenure of the three newest commissioners, West End Plaza is hardly a controversial topic any more.

When asked about the chairman election, county commissioners also mentioned that all five board members are friendly with each other. It’s another reason commissioners were indifferent or supportive of keeping leadership positions the same in 2016.

“I think we’ve got a lot of momentum going. We all get along and there’s a good personality balance,” Edds said.

Staff Report The forecast for Wednesday afternoon in downtown Salisbury and Spencer is clear, 56 degrees and noisy. That’s because a dozen... read more