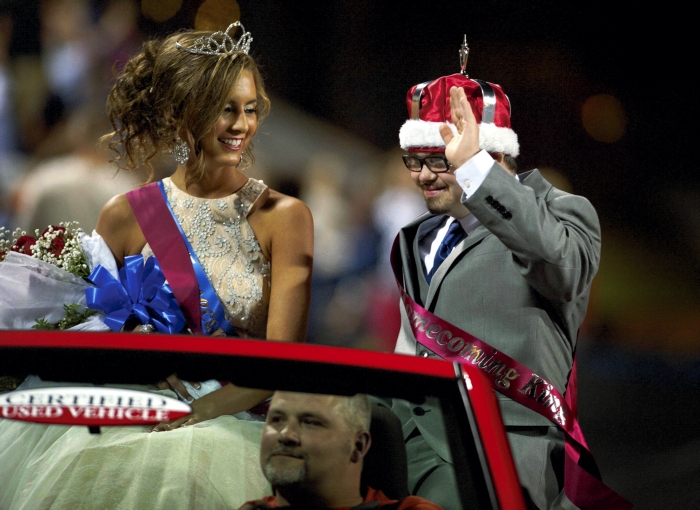 JON C. LAKEY / SALISBURY POST East Rowan High School’s Caleb Cinquemani was crowned homecoming king during homecoming celebrations at the school in October. Cinquemani joined queen Ashley Mayhew for a brief ride in a red Ford Mustang convertible in front of the home crowd after halftime of the football game between the Mustangs and cross county rival West Rowan. Cinquemani was born with Down syndrome and is a senior in the Exceptional Children’s Program. The royal couple were classmates in first through fifth grades at Morgan Elementary; now they are in high school together.

Caleb Cinquemani has a lot of favorites.

His favorite subject is history. His favorite superheroes include Spider-Man, Batman and Superman. He also likes Logan from the X-Men, also known as Wolverine.

He likes Legos and Magic Tree House books and Maroon 5 and Guy Fieri and Larry the Cable Guy.

Caleb can spend the whole day listing all of the things he likes best.

One of his favorite days would have to be the day he won homecoming king. When Caleb’s name was announced during the homecoming pep rally, students ran down from the bleachers of the gym and within minutes Caleb was engulfed by people. The whole school broke out into celebration.

Caleb, East Rowan’s 2015 homecoming king, will be in the Southern Rowan Christmas Parade and the Holiday Caravan this week. He’s a senior, his favorite president is Abraham Lincoln and, oh yeah, he has Down syndrome.

You’ve got a friend in Caleb

Caleb’s parents knew before he was born that he would have Down syndrome. Caleb’s mother, Lori Cinquemani, said she and her husband vowed to not let his disability change the way they treated him.

“We promised ourselves that we would never allow his disability to be an excuse,” she said. “Sometimes I think we forget that he has a disability.”

According to the National Down Syndrome Society, Down syndrome is a genetic condition in which an individual has a full or partial extra copy of chromosome 21.

Down syndrome is the most common genetic condition, with one in every 691 babies in the United States born with the condition. About 400,000 Americans have Down syndrome.

While talking with him, it is easy to forget Caleb has a disability. He has the common features of an individual with Down syndrome, the upward slant of the eyes, the small stature, the flat facial features. He also has dark hair paired with dark-framed glasses around his crystal blue eyes. He smiles a lot while talking and likes to compare people and events to movies that he’s seen.

When Lori bought Caleb a new peacoat for the parade, he said he will probably look like Marty McFly from “Back to the Future.”

He has a great memory for movies and historical facts, and if there’s one thing he has a mind for, it’s friendships.

Lori said Caleb gets the concept of a stranger, but in his mind, no one meets that definition.

“We joke because we can go down to the beach and he’ll run into somebody that he knows,” Lori said. And it’s true. Lori said sometimes she and her husband will be walking along and look back to see Caleb hugging some random person, who ends up not being a random person because Caleb has friends from so many different places.

Once when Lori took Caleb along to a beauty salon visit, Caleb started talking to one of the hairdressers. Lori did not think anything of it, until the hairdresser came over to her crying. She had apparently been having a bad morning, but Caleb was able to turn it around.

“She said, ‘He just made me realize everything’s good,’” Lori recalled.

Caleb seems to have that affect on people. Even at school, he is able to turn attitudes around.

One day during a school fundraiser called Stop the Bop, the students were especially annoyed. To raise money, the school played annoying music and people had to pay to change the song or turn it off for a certain amount of time.

“So right here in the commons, Caleb starts doing the routine from the movie and just starts breaking it down. And then you saw other kids get up and start to dance with him. Attitudes changed a little bit,” Kate Cecconi, a special education teacher and student council adviser at East Rowan, said.

It’s because of things like that and his friendly disposition that Caleb is so loved at East Rowan. He knows a lot of the students by name and gives out hugs to every person he sees. So it was no surprise that the seniors at East Rowan wanted to give something back to Caleb to repay his friendliness and kindness. They wanted to give him a crown.

It was the students of East Rowan that came up with the idea of making Caleb their homecoming king.

Cecconi said a couple of the seniors came up to her one day during school and asked if there could be two homecoming kings this year.

“And so I asked, ‘Why would I do that? What would be the point of having more than one?’ And they said that they wanted to try and get the entire senior class to vote for Caleb, but if he didn’t win they wanted to know if they could give him a crown anyway,” Cecconi said.

Cecconi decided to just put Caleb’s name down with all of the other candidates.

Caleb didn’t know that he was entered at first. Cecconi said while the campaigning and voting was going on, she talked with Caleb about the possibility of him winning because he was a senior.

“He didn’t really know that he had made anything until we announced the top four winners,” she said.

Cecconi showed Caleb the top four nominees and when Caleb realized his name was one of the four, he was determined that he would be wearing that crown.

“From that day until homecoming he was like, ‘I could win. It could be me,’” Cecconi said.

And then the day for the announcement finally came. The king and queen were announced during a pep rally before the homecoming game. The four boys who were the top choices for homecoming king all stood in front of the crowd waiting to see who’s name would be called. But really, it didn’t matter whose name was called because the other nominees said that if they won, they were giving their crown to Caleb.

With the anticipation built up and the crowd at the edges of their seats, the homecoming king was announced. Caleb had won — by a landslide.

The crowd went crazy. They were dancing, chanting his name and running off the bleachers to congratulate Caleb.

“I felt amazing, and I could feel God’s presence on me and my grandpa and my grandma, too,” Caleb said. He keeps his crown on top of his wardrobe, where his dog can’t get to it.

“As a parent that’s the one thing you’re fearful of, is for your child not to be liked, not to have the friendships,” Lori said. That day, Lori was a witness to all of Caleb’s kindness coming back to him.

She cried then, and she cried when retelling the story.

“Whenever I found out that I was queen, it was really exciting to know that we were together,” Ashley Mayhew, the homecoming queen, said. She and Caleb have been in the same class from first to fifth grade. Now they are in high school together and homecoming royalty together.

“I was very excited for Caleb. I knew he was very deserving,” she said.

Caleb got to ride with Ashley in a Ford Mustang during the homecoming game and they’ll both get to be in this week’s holiday parades.

It would be no surprise if Caleb knew almost everyone at the parade this week.

“I am very proud of East Rowan. They have really just taken Caleb into their fold and just accepted him for who he is, and that’s an amazing thing because you don’t see that as often,” Lori said.

Caleb said that he wants to be a movie star when he gets older. As far as the fame and notoriety of being a movie star, it’s obvious that Caleb had those long before he ever got a crown. Caleb is already a bright, shining star.

“He loves everybody; he wants to be everybody’s friend and (becoming homecoming king) is proof,” Lori said. “It doesn’t matter whether he’s in a popular group. That doesn’t mean anything to him. He’s just that special.”

Lighting of the Fall Fires sells out with 600…