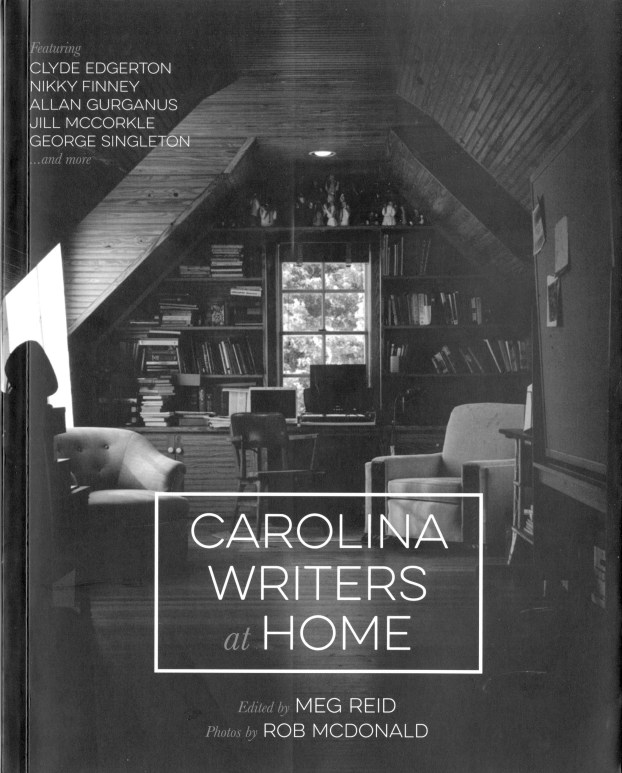 Writers invite us into their spaces

What a treat “Carolina Writers at Home” is. This book of essays by Carolina writers about where they live and do their writing is one to get lost in.

With atmospheric photographs by Rob McDonald, the pages are slick, the book heavy, but the writing is so personal and inviting, it soars.

The essays are revelatory and completely engrossing as the writers draw you in to their kingdoms, shacks or messy offices.

Details abound about who keeps what and why and where it belongs. More than one writer insists the collection obsession isn’t hoarding.

Allan Gurganus talks about his collections, including 51 Federal-style mirrors and an 18th century mannerist of Saint Ursula.

“Your collection can teach you history and console you with a form of rosary-bead love. My diverse holdings signal to me that I am finally home. They give my still-gluttuness eyes unending, hamster-wheel subject matter.”

Sitting in your own reading chair or happily solitary in your version of shed or shack, you’ll lose yourself in these vignettes, and you’ll come to know writers like Clyde Edgerton, Jill McCorkle, Allan Gurganus and Josephine Humphreys better.

While some authors find their muse in a large, well-built house with a comfortable office, others downsize to a series of small rooms or create a space outside where they can get away from distractions.

They specialize in distractions, often surrounding themselves with objects full of meaning though seemingly random to the voyeur who peaks inside their rooms.

Some are meticulous and neat, but more are happily frowzy, surrounded by scraps of ideas, photographs, toys from long ago or rocks and shells.

Editor Meg Reid was inspired to create this book when she house-sat for Clyde Edgerton in Wilmington while in graduate school. His writing space is a small room that is accessed by a door in a closet, so each time he goes to write, he feels as if he has gone somewhere else to do his work.

But Edgerton wanted to write about his fire pit, instead. Reid was OK with that.

” … I asked them to write about their homes from whichever perspective struck them as the most important. … If not concerned with space, many of the essayists gravitated toward the objects around them — objects of personal value, objects of no value.”

The book, published by Hub City Press in Spartanburg, SC, coincides with the press’ 20th anniversary, so it is a fitting celebration of the people and things that make North and South Carolina authors special.

McDonald used little light for his dark black-and-white photos. They capture the author in a casual way, and their spaces in bits and pieces, a corner here, a bookcase there. They never reveal too much, never expose the author’s place to undue scrutiny.

Dot Jackson is a former journalist who is one of the most delightful storytellers you’ll ever meet. Her rusty singlewide is enough for her. It’s near her pet project, the Birchwood Center, a place to preserve the arts, crafts and words of upstate South Carolina.

Paradise has the advantage that everything works — the stove, the heat and the toilets, and except for a bear who likes to live underneath it, it’s quiet enough to create.

In her essay, Jackson remembers writing her one and only novel, “Refuge,” in the basement of a haunted house (the ghost having been in residence long before Jackson arrived): “Oblivious, I worked on an aged, skeletal typewriter, in a basement dark as a leaking tomb, amid swarms of hopping cave-crickets and a daddy longlegs army.”

Michael Parker finds himself in the middle of a triplex after leaving a Craftsman-style bungalow full to the brim with stuff, sometimes duplicates of stuff, books certainly, but much more.

He prefers the term winnowing to downsizing. the word winnow, he writes, has a touch of wonder in it. Downsizing sounds too mathematical.

“Winnowing involves far more than culling, than the disposal of chaff. Winnowing produces aftershocks. After ten months in my rooms, I am still surprised by the presence of echo, sound bouncing off the absence of all I have managed to shed.

David Gessner of Wilmington builds an 8-by-8 shack in the back of his yard on the edge of a salt marsh, with a shelf for a desk, which he soon rips out because he already has two offices. With a slanted roof and using a screen door for a window, Gessner’s space is just right for thinking, watching birds and pondering the next storm.

“I have no illusions that the shack will last very long. A hurricane will take it out, I am sure of it. Which is fine with me. It was not built to last, or rather, it was built not to last. It is my anti-trophy house. My monument to impermanence.”

Jill McCorkle, in Hillsborough, remembers the wooden crate her father brought home from the textile mill where he worked. He intended it as a tool shed, but McCorkle moved right in with a small rocking chair and a discarded television stand for a table.

“I have had fourteen other designated writing places that I have tried to shape in image and spirit. What I see is intangible and yet what has always been consistent is some access to a window and natural daylight, the presence of objects that represent particular times, places, and people, the rhythmic breath of a cat or dog and the great desire to conjure enough emotional resonance that on a good day I will laugh and cry.”

If you love reading and writers, treat yourself to this book. Then find a special spot — a porch, a corner chair, a shack — to read it.

Buy extra copies so you can share this imaginative collection with your friends, or just so you can hoard it and keep a copy wherever you need inspiration.

By Susan Shinn For The Salisbury Post Ask Catherine Hall how it feels to be 100, and she’ll say she feels... read more