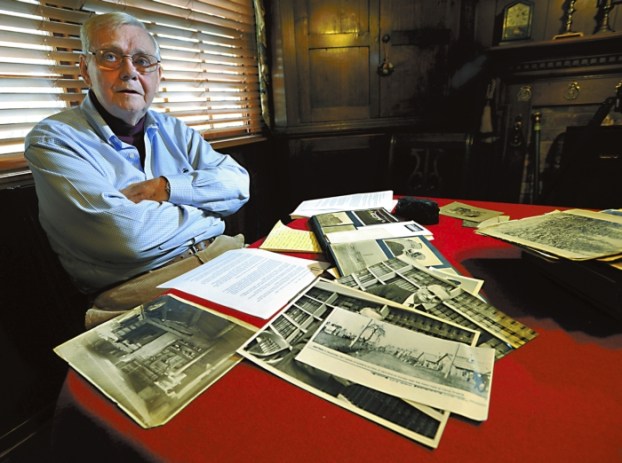 Jim Dunn sits as his dining room table with 100 year old photos made by his father, James Allan Dunn. Many of them were made in Laramie, Wyoming when he was a student there. photo by Wayne Hinshaw, for the Salisbury Post

Come ride with me down a flowing stream of my words and look through my camera at the scenes  James Allan Dunn photographed with his XV Conley Safety camera in the early 1900s in Laramie, Wyoming. Through the words of  his son, Jim Dunn, we will follow Allan from Pennsylvania, as a 15-year-old, on the adventures of his life, which ended in Salisbury. Jim Dunn, telling the story of his father, is a former city planner, Salisbury City councilman and retired N.C. Division of Community Assistance employee who lives in Salisbury.

James Allan Dunn was born to parents who immigrated from Scotland to the Pennsylvania coal region. The family’s livelihood came from coal mining in Scotland and Pennsylvania.

In 1909, Allan’s father, coal mining engineer William Dunn, decided to move his family to the wild west of Laramie, Wyoming, to seek his fortune in coal, copper and gold mining in the rough cruel mountains of Wyoming.

Allan was a brilliant young man interested in the wilds of nature, the excitement of hiking the mountains, the challenge of photography and going to college at the University of Wyoming, where he quickly enrolled.

Rolling all of his interest into a package, Allan found part-time employment taking and selling photos in Laramie and at the university to help pay for his tuition. Details of his experience working for a studio photographer have evaporated like the darkroom chemicals that he used, but he did printing of black and white photos for one or more photographers, as well as, his own photo work.

Allan’s time was filled with photography, working in the family owned greenhouse/nursery operation growing fruits and vegetables, and digging in the mines looking for gold and copper.

Let me explain more about life in Wyoming in 1909. Life there was rough. The weather was rougher and the culture was just coming out of the wild West gunfighter days of the late 1880s. The town was founded in 1860 as a tent city and was a lawless railroad town with more than 20 saloons, one hotel and no churches. To quote my own column about Laramie that I wrote in 2012: “Laramie was the ‘end of the railroad line.’”

Thirty-three years before Allan arrived, General Custer had been wiped out at the Little Big Horn in Montana in 1877. Butch Cassidy and “Big Nose” George Parrott had served time in the Wyoming Territorial Prison in Laramie in 1872. This is the town that Chicago Tribune writer Jim Chisholm wrote: “The wildest roughs from all parts of the country are congregated here, as one may see by glancing into the numerous dance houses and gambling halls. Men who carry on the trade of robbery openly and would not scruple to kill a man for ten dollars.”

Thirty some years removed from the old West in 1909, we drop our young 15-year-old Allan into Laramie to hike the mountains at 7,165 feet above sea level or walk the plains with the constant winds from the west always blowing. He enrolled in the only college in the state that was established in 1886.

James Allan Dunn’s son, Salisbury’s Jim Dunn, pulls a treasured photo of his father from a family album showing Allan in a uniform with the letters UW on the cap and shirt. Jim assumed that is the uniform that his father wore as a University of Wyoming student.

If uniforms were required or if he was in some early JROTC program, we can only guess.

Jim questions: “ The new university might have only had one building at that time.”

In another of Allan’s old photo albums are 100-year-old photos of grand Victorian homes and buildings in Laramie. Having visited Laramie myself in 2012, I believe that many of the buildings and and downtown structures are still there just as they were when Allan photographed them in 1909 and 1910. They are well preserved to this day.

Jim shakes his head while seated at his dining room table looking at the mounds of albums and photos, saying, “All these photos by dad are 100 years old and he took all of these.” He remarked how well they have held up through the years.

“Here is a photo of the cabin that dad and granddad lived in when they went up to work the mines,” continued Jim. It is a log cabin with a metal frame bed and a shotgun hanging on the wall. Jim added, “That shotgun has the teeth marked on the stock were a wolf attacked dad on one trip. He was out hiking in the mountains and a wolf followed him and attacked him. He hit the wolf in the head and the wolf ran off after biting the stock. I have that gun with the teeth marks.”

“Dad carried his camera with him everywhere he went, whether he was camping or studying nature or taking photos of rabbits,” added Jim. His camera was a XV Conley Safety Camera that used 4×5 glass negatives. The camera predates the use of roll film. Jim has preserved the camera and a few of the glass negatives and the leather case. The fastest aperture opening is f/8 and the slowest is f/128. The shutter speeds are “T,” “B”, 1/100 of a second, 1/50, 1/25/ 1/5, 1/2, and 1 second.

Allan kept detailed notes on his photos. On the back of most of the photos, he described the camera used and type of photo paper it was printed on. There is one photo of a rock formation with a man standing high up on the rock. The information reads, “Negative made with Model XV Conley Long Focus Camera F.8 convertible lens, print on hard carbon matt KRVXO.” Another inscription reads, “The ’Needle” in Shoeshone Canyon Wyoming, negative taken with 5×7 long focus Century Camera by Mr. Wm. Isberg Laramie Wyo. Enlargement made by Allen Dunn on Hard Carbon Matt Kruxo development paper.”

Jim said his grandfather William had serious health issues “due to the severe weather, high altitude, and his business failures. His mining was unsuccessful and a fire destroyed his greenhouse business. He lost everything and suffered a nervous breakdown.” In 1915, the family moved to Weaverville, N.C., near Asheville on a doctor’s recommendation.

In the years leading up to WWI, Allan worked as a civilian interpreter of French at Camp Green which was a military base in Charlotte. He later enlisted in the Army and fought in trench warfare in Verdun in northeastern France. Near the last days of the war, he was poisoned by mustard gas and spent four months in French hospitals before coming back to North Carolina in 1919. While in WWI service, Allan kept a detailed diary of his daily duties. He wrote his entire military story in his diary that Jim now has transcribed.

When he returned from WWI in 1920, he taught French at Salisbury High that was located in the old Frank B. John Building that is now part of the Rowan-Salisbury Schools office. While teaching in Salisbury, he attended law school at UNC-Chapel Hill during the summer months. He started his law practice in Salisbury in 1925. He married Lois Sanford in 1927 and they had three children. His son Jim Dunn of Salisbury is his only living child.

He continued his love of photography. His favorite camera that he continued to use was a “No. 3A Autographic Kodak Model C.” It was designed so you could scratch your name or brief information on the edge of the negative in the camera. It used large roll film to produce negatives. His special camera had a “ball bearing shutter with a aperture of f/7.7-f/45. The shutter speeds were a meager “T,” “B,” 1/25 second, 1/50, and 1/100.” He owned numerous other film cameras during his life, but none topped his love for the Autographic Kodak Model C.

Allan had a long career in public service starting in 1930 as a prosecuting attorney in Rowan County courts. In 1932, he was elected as a Rowan County judge. In 1934, he was elected to the N.C. State Senate and served until 1936. Deciding not to run for re-election to the state senate, he served 8 1/2 years as a special assistant to the U.S. Attorney General in Lands Division of the Department of Justice.

As WWII approached, he was elected again as the prosecuting attorney and judge in Rowan County courts. In 1949, he was appointed to the newly established position of chairman of the Rowan County ABC Board, a position which he held for 21 years when he retired in 1970 at the age of 75. He resumed his private law practice. He died in 1973. His wife, Lois Sanford Dunn, died in 1993.

Son, Jim Dunn, described his father as “one of the most honest people who ever lived.”

“I can’t believe how honest he was. One year when filing his income taxes, he sent a letter with his tax return to the IRS explaining that he was sure he owed more taxes than he had records to prove so he paid additional taxes in case he had missed something.”

According to Jim, Allan hated his life in Wyoming because of the fierce weather, cold and snow and was glad to move to North Carolina. During World War I in France, it was always snowy, cold and wet in the trenches and Allan hated the weather there also.

Allan once told Jim, “’I never wanted to live further north than the south bank of the Yadkin River.’ He thought that North Carolina was the promised land.”