Hook, line and sinker: navigating fraud in the information age 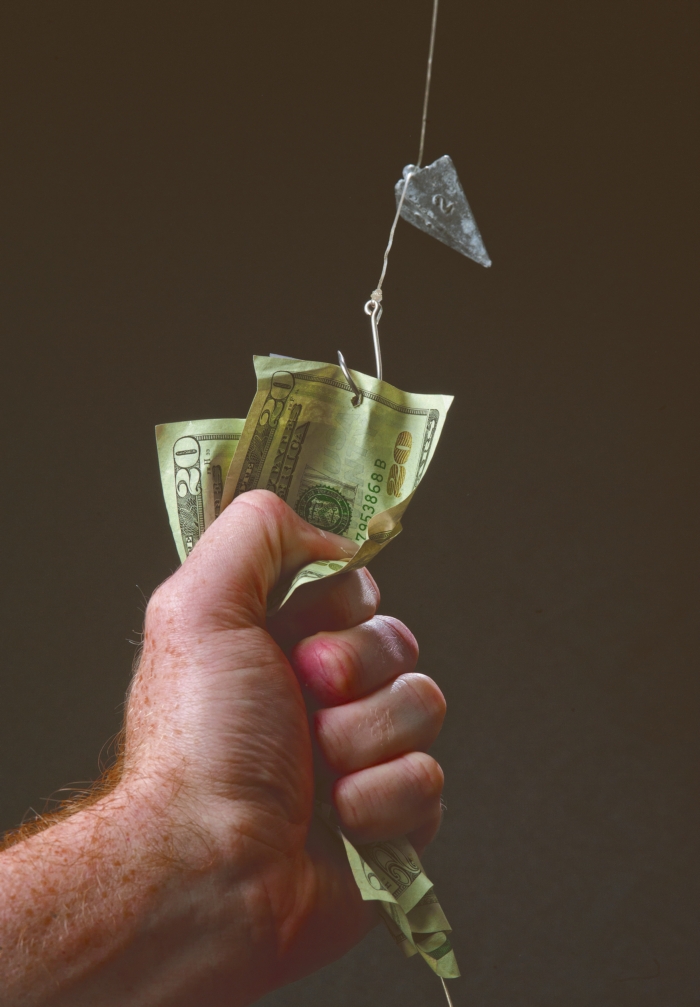 More than 4,000 of those were in regards to telemarketing fraud — a total of 4,460 — and 1,106 were filed for credit scams and identity theft. And that’s just in North Carolina.

Fraud and identity theft are growing problems, Detective Brent Hall with the Salisbury Police Department says. In his four and a half years investigating credit card and wire theft, he says he’s seen the cases pile up.

Stealing someone’s credit card number, making a scam call or hoodwinking someone with a fake check has become easier with the advent of smartphones, mobile banking and Internet phone services like Skype and Google Talk.

“The majority of Americans will have their credit cards stolen,” Hall said.

The likelihood of having credit card information compromised or running into a scam is pretty high, the Federal Trade Commission reports. In its Consumer Sentinel Network report, the FTC said that in 2014 it received 1.5 million fraud-related complaints.

And the numbers have steadily been increasing. Sixty percent of all complaints the FTC received in 2014 were for fraud, with people reporting an average loss of $2,005.

The majority of the complaints the FTC received came from people 50 and older. The FBI reports that scammers may make hundreds of calls until they find someone who will bite — hook, line and sinker.

Often, those are the people who can least afford to pay.

False checks and other prizes

Patti, not her real name, a 73-year-old woman from Rowan County, was one of those people.

Patti says that in October, she received a call from a man who identified himself as Mike Grant. Grant claimed to be from Publisher’s Clearing House and told Patti she’d won $500,000.

Patti says she’d entered a few contests with Publisher’s Clearing House, but had never heard anything back. Excited about her win, Patti, a widow, didn’t ask questions.

Patti wired the money through Western Union and eagerly waited for her prize. A few days later, she says, Grant called back claiming he had a lawyer and demanded another $3,000. But Patti couldn’t pay. She says that’s when she realized it was a scam.

“That really killed me.”

She says a friend of hers convinced her to report it to the Rowan County Sheriff’s Office, where investigators determined that the money had been sent to an account based in the Philippines.

Auten has some experience with scams. He’s received a few sweet-talking phone calls, some phishing e-mails and just last Tuesday, a fake check in the mail.

The check was delivered to 232 N. Main St., the Rowan County Sheriff’s Office, and was placed on Auten’s desk. Though the cheap label raised some suspicions, Auten says he receives civil documents via priority mail all the time, and didn’t think much of it — until he opened it and found a check for $1,400.

While it may have fooled someone desperate for cash, Auten knows his scams, and knew immediately that something was off. For one, the signature was stamped, and the check looked cheap and lacked security devices. It was from Farleigh Dickinson University in New Jersey, which is a legitimate institution, but Auten has never had any dealings with them.

“I knew right out of the gate that something was wrong,” Auten said.

The return address is also from an investment firm in Indianapolis, Ind., and after some digging, Auten discovered that the address on the check itself belongs to an ATM in New Jersey. Auten says that a bank employee he showed the check to was able to determine on sight that it was a fake.

Normally, Auten says, mail scams like this one come with instructions and a number to call. Auten’s package lacked these, but he says they’ve still drawn many people in — people are so excited to receive windfall cash, especially around the holidays, that they don’t look too closely.

Auten says that people receiving calls for prizes or unexpected cash should ask themselves an important question: Why them?

A wolf in sheep’s clothing

When someone calls with supposed prize winnings, or sends an e-mail claiming to be foreign royalty or ships a check for a lump sum, there are a few things people need to consider, Auten says.

The first is: out of all the people in the world, or in the country, why you? Another question to ask yourself, Auten says, is have you had any dealings with this particular company? If you haven’t, why are they calling you? All of these, Auten says, should be red flags.

But sometimes, scammers get tired of playing nice. The FTC reported that 11 percent of all fraud complaints received were for debt collection. Scammers will impersonate law enforcement, lawyers, banks or agencies like the IRS and threaten jail if the victim doesn’t pay.

“Once it starts down that road, it’s a scam,” Detective Moose with the Rowan County Sheriff’s Office said.

The key to avoiding these scams is to know the way businesses work, Detective Chad Moose with the Rowan County Sheriff’s Office said.

“You don’t get arrested for owing money,” Moose says.

Most official agencies — law enforcement, the IRS, power companies, and others — will never ask you for money over the phone. And they will never request that you get a money order or a pre-paid card, Auten said.

Businesses like to leave paper trails, and should always send official notices the old fashioned way — through the mail. Moose says that if you receive a phone call about a bill owed, ask the company to send you the paperwork.

And don’t give them your name, address, or any other information, Moose says.

“I would never provide anyone information on the phone,” Moose said.

Anyone who has legitimate business with you, especially if it’s in regard to bills or taxes, should already know who you are and how to contact you.

But sometimes, information is taken without your knowledge. Digital information is very vulnerable, Hall says. And it can take years to find out if you’ve been a victim.

“Let’s say your card gets used today,” Hall said, “It could have been stolen years ago.”

Thieves can steal credit card numbers by the dozen by hacking into databases, or with scamming devices attached to card machines or by taking quick photos of cards with a phone during at transaction. Gemalto reported in its 2014 Breach Level Index that there was a 46 percent increase in data breaches worldwide in 2014 and that last year 1,540 breaches compromised more than one billion records.

In any of these instances, Hall says, the information can be saved or sold — to be used tomorrow or a few years down the road.

There is a silver lining. While the FTC reported that fraudsters managed to skim a total of $1.7 billion from unsuspecting victims last year, 49 percent of people who received scamming phone calls, e-mails or packages didn’t fall for the tempting treat.

While it’s difficult, perhaps even impossible, to protect your information completely, there are steps you can take to avoid losses and stop scammers in their tracks.

Local law enforcement officials say that one of the most important things you can do to protect yourself is to keep an eye on your bills and papers.

“Keep an eye on your bank statements,” Hall said, “make sure nothing unusual is happening.”

In the new, digital age, many banks have an option to set up spending alerts, and if you receive any unexpected bills, or anything from a company you don’t normally deal with, report it.

If you suspect that your credit information was stolen, Hall says, call your bank immediately. They may be able to cancel the transaction or conduct a charge back. Then, cancel the cards and run a credit report.

But when you’re dealing with a phone scam, things work a little bit differently. Auten says that one of the best ways to foil a scam is to ask questions.

“Clearly know who you’re speaking with,” he said, “Push them back.”

Ask for the person’s name, position and the company they claim to work for. Get a return phone number, and tell them you’ll call back.

Even if the scammer says they’re law enforcement, or that they need the money immediately, hold them off, Auten says. It’s important not to fall for fear tactics and to take the time to speak to your family, the business the caller says they’re from, your local law enforcement agency, or even a lawyer.

“Push them as hard as they’re pushing you,” Auten said.

Scams can be registered online with organizations like the FTC, the FBI, and locally with bbb.org/charlotte. And always file a report.

“It’s always important that people report it as soon as possible,” Hall said.

And remember: if it sounds too good to be true, it probably is.

The good news is that now, fraud victims have access to a lot more resources than they did when cases first began surfacing in the ’90s, when it could take months for victims to receive any kind of restitution from a bank.

“Now because it’s so commonplace, you can get your money back with days — or even the same day,” Hall said.

But what do you do if, like Patti, you can’t apply for restitution?

Because she withdrew the money from the bank before she wired it, she says she’s unable to get that $2,000 back. And since the money was sent overseas, she has very little hope of the scammers ever being brought to justice.

Making sure scammers are punished to the full extent of the law is a very real problem that law enforcement officials face when investigating fraud.

“What’s tough about this?” Auten said, “Getting anything done.”

If a credit card is stolen, or someone orders packages online, tracking them down is pretty easy, Hall said. But with phone scams things get more complicated. Scammers can mask their numbers to look like an official contact for an agency, can use false information with online services like Skype or can use a pay-as-you-go phone that doesn’t require a contract, and therefore, no information.

And then there’s relegating who’s in charge of the investigation. Take the check Auten received. It was sent to North Carolina from an Indianapolis address, and both the institution and address listed on the check are in New Jersey.

Whose jurisdiction is that, Auten wondered, and who is going to take responsibility for that investigation?

“It just makes it pretty hard to follow up on these things,” he said.

While Moose says that local law enforcement will report scams to the state, and the state can, in turn, report scams to the FBI, Hall says that large agencies rarely deal with losses under $10,000. They won’t touch someone who’s taking $500 here or there across the country — it’s just not a big deal to them. But $500, or the average $2,005 loss the FTC reported, can be a lot of money to one person.

“I felt like a fool,” she said. “I should have known better.”

Getting justice in a fraud case is something of a long game, but reporting cases to your local law enforcement agency can provide some relief.

“Usually, once we call them back they never call the victim again,” Moose said.

For Patti, it’s too late. But she does have some advice for anyone else who fraudsters set their sights on.

“If you find something you can’t understand, don’t touch it,” she said.