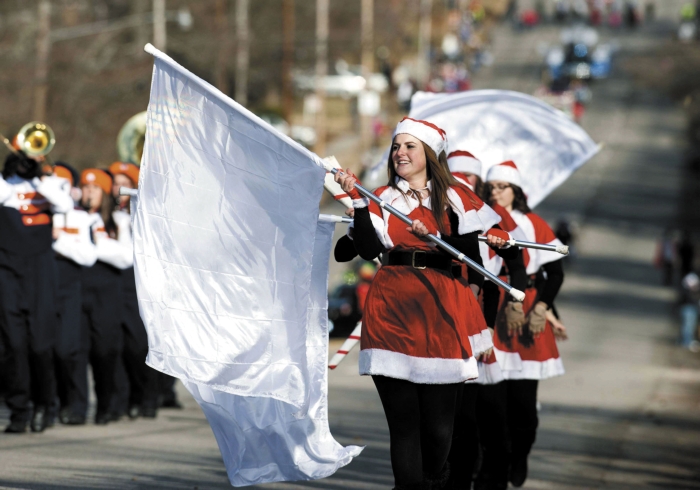 The flag unit of the Jesse Carson High School band was dressed in red Santa outfits during last year's parade.

The forecast for Wednesday afternoon in downtown Salisbury and Spencer is clear, 56 degrees and noisy.

That’s because a dozen bands — and who knows how many sirens — are among the 140 entries in this year’s Holiday Caravan parade.

Wednesday is the big day, with the parade starting at 2 p.m. on Salisbury Avenue in Spencer and traveling south to restart at 3 p.m. on Main Street in  Salisbury.

The parade begins with the Arey Unicycle Clowns, followed by Rowan County Sheriff Kevin Auten and the Salisbury and Spencer police departments.

Fifth in the lineup will be the Rowan County Veterans Honor Guard, a group that won national honors this year. Following them will be the parade banner and Grand Marshal Lauren McCombs.

Food Lion is the parade’s presenting sponsor and will have a big presence near the beginning of the parade.

The Salisbury Mini Funk Factory Marching Band is also in the lineup, as are the Oasis Shrine Band and — a crowd favorite — the Livingstone College Band.

Presiding over it all will be Miss Holiday Caravan Ashley Mayhew and her court.

When you see the Dimensions Dance Arts group, you’ll be at the parade’s midpoint.

Santa will bring up the rear, with Rowan Rescue Squad sounding the final sirens behind him.

While most people watch the parade from the sidewalk, reserved seating is available in Spencer and Salisbury for $4.50 per seat. For more information, call 704-636-5335.

The Holiday Caravan’s complete lineup is on page 6E of today’s Post.

As the story goes, the Spencer Jaycees began this Rowan County tradition with a plan to buy and sell Christmas lights. A ceremony was held at the town park, and the Jaycees arranged for a small parade. Three units participated, including the Spencer High School Band, Miss Spencer (who rode in a convertible) and, of course, Santa Claus on a fire truck.

Scores of people turned out for the celebration — enough to make people want to do it again the next year.

The parade expanded through the years and, in 1956, was officially titled the Rowan County Christmas Parade. In 1957, police estimated attendance at more then 20,000, according to the Holiday Caravan website.

Eventually a partnership formed between the Salisbury Rowan Merchants Association, the Salisbury Jaycees and the Spencer Jaycees to form one large parade that would travel down the “Main Streets” of both towns. In 1962, the parade became known as “the Carolinas’ Loveliest and Liveliest.” The next year, a contest was held to name the parade, and “Holiday Caravan” won.

Another name synonymous with Holiday Caravan for many years was Julian C. Johnston, who was involved in 35 caravans as a Jaycee, and then as a director of the parade, until his death in 1995. The parade’s board of directors established the Honor Band Award in memory of Johnston.