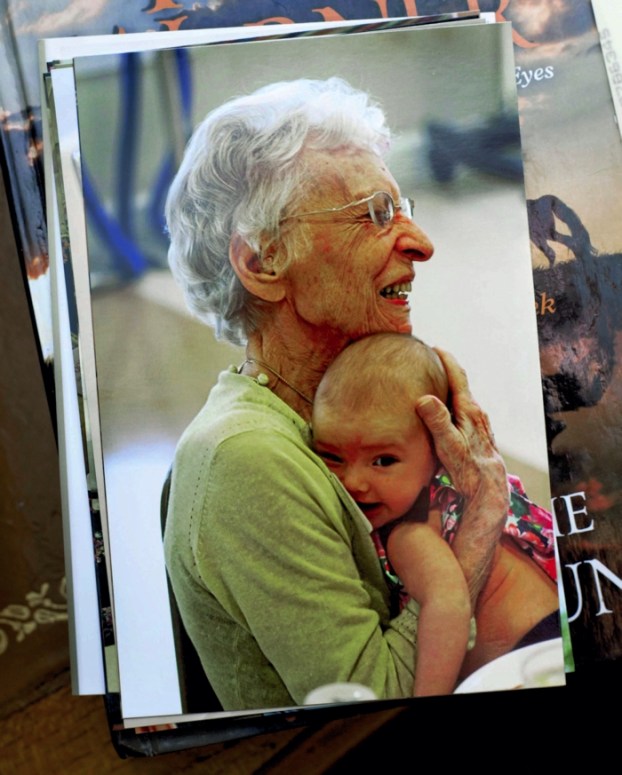 JON C. LAKEY / SALISBURY POST A family photo of 100-year-old Catherine Hall meeting one of her great-grand children Clara for the first time during a family birthday party when the elder Hall passed the century mark. JON C. LAKEY / SALISBURY POST Catherine Hall talks with her son Joe at her apartment at Trinity Oaks. Hall recently turned 100 years of age and celebrated with her family. Hall sat down with a reporter to share a brief overview of her life which is captured in a meticulously and creatively designed scrapbook she created.

Ask Catherine Hall how it feels to be 100, and she’ll say she feels same way she always has.

“I’m just a little farm girl,” says Catherine, who grew up in Saxapahaw, now a suburb of Chapel Hill.

This summer she celebrated with her large family, and her brother, Dr. Paul Cheek of Elon, her baby brother. He and Catherine are the only two remaining of a family of eight children.

When Catherine’s husband, Dr. Cullen Hall, died, she made four beautiful scrapbooks chronicling their life together. It was good therapy for her, she says.

“I made some right pretty books,” she notes. “I have a little artistic ability.”

The scrapbooks always come out at family gatherings, but they typically stay beneath her bed. She and Cullen were two of the original residents of Trinity Oaks. Almost a year ago, she moved to assisted living, and is getting along fine there, she says.

Catherine attended Campbell Junior College (now Campbell University). That was where “this little girl from a small farm in Alamance County met a boy from a tobacco farm in Cumberland County.”

She’d worked at Burlington Industries to save money for college: $700.

Then, she says, “I went to college and met this neat-looking guy. He wouldn’t marry me until he could pay for a roof over my head.”

Brother Paul was shot down in France and a prisoner of war for 13 months, but survived, liberated by Gen. Patton. Another brother, Ed, was killed in a plane crash, during training in Mississippi. A third brother, Candler, served in the Pacific. Brother James could not serve because of an eye injury.

“Oh golly, those memories!” Catherine says. “I don’t really often sit and go over them, but I have them there.”

When Cullen completed his residency, Catherine taught second grade, and later returned to school for special education certification. Cullen first’s job was in Spartanburg, and then the young family moved to Salisbury.

Along with her four children, Catherine raised two nephews for a time. “That house did rock, I’m telling you,” she says.

Catherine got used to being the wife of an obstetrician-gynecologist in solo practice. Cullen delivered more than 8,000 babies during his career.

“His hours were erratic,” she says. “He never knew when he’d be called out of church or a social gathering. We just learned that’s the way it is, and get on with it.”

Catherine says of her husband, “He was his own person. He’d rather do it his way. He was one of a kind.”

Joe says that his dad in the early years bartered for his services. One patient did his ironing for a year, daughter-in-law Pam notes.

The couple moved to Trinity Oaks when it opened in 1993, choosing their wallpaper and other décor.

Cullen put in raised beds and grew vegetables. “A lot of our living is rooted here,” says Catherine, who baked fresh sourdough bread for new residents.

Catherine also developed quite a workout regimen. She’d ride the bike for 20 minutes, followed by a series of sit-ups, leg lifts and push-ups, followed by weightlifting. She still does chair aerobics.

“You get a pretty good workout,” she says.

“I let someone else worry about my medicine,” she says. “This is easy living.”

A petite woman, Catherine always watched her weight over the years. Now, she says, “I don’t care if I get on two or three extra pounds.”

She says that diet, exercise and genetics have helped her reach this milestone. Pam says she also has a good attitude toward living, and loves people.

She says she developed a heart for special needs children because her youngest sister, Mavis, had epilepsy.

“She never spoke to us,” Catherine says. “She was a baby to be looked after. That does something to you, when you live through things like that.”

The couple traveled extensively in the 1980s, visiting the Holy Land and Italy, and seeing a good bit of the United States as well.

When Catherine does look through those scrapbooks, she is pleased.

“To have a long life and so many good memories is very satisfying and fulfilling,” she says.

Catherine Hall, in her own words