Taking it to a whole other (reading) level: Hanford-Dole Elementary gains state and nationwide recognition for Achieve3000 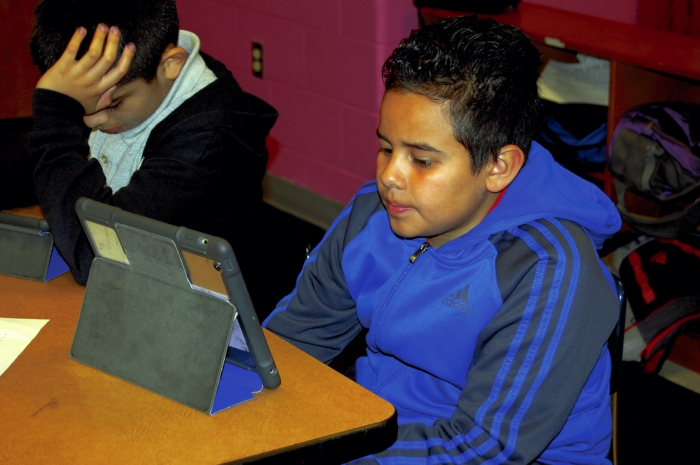 When Jenna Rossi’s fifth grade class at Hanford-Dole Elementary School first started Achieve3000, they had a goal of completing 60 articles.

Rossi thought it would take months and months to complete.

It only took weeks.

The students at Hanford-Dole Elementary have fallen in love with the digital literacy program and have received state and worldwide recognition because of it.

Students answer questions about the text to evaluate their comprehension. As the child gets better and better at answering the questions, the program increases the complexity of the articles they are given.

The students receive immediate feedback and badges and congratulatory pages when they do well.

Rossi said the class’s Lexile levels have gone through “a tremendous amount of growth.”

“We had one of our students, his growth was over 155. And that was like the biggest in the entire school, which was really cool,” she said.

Rossi’s class also colors in a column on a chart when they complete an article. Rossi displays the charts in front of the classroom. Bryan Alarcon, a student in Rossi’s class, has one of the longest bars on the chart, and was coloring more of it in as the class worked during their literacy block.

Rossi said many of her students have completed over 40 articles for the semester.

Rossi can assign certain articles for her students to read depending on the topic they are covering. Once the students complete the assigned ones, they can search for different articles about topics that interest them, from Beyoncé to football.

“That’s why they love it so much because they’re reading things that they like,” Rossi said.

Alarcon was recognized worldwide as No. 1 for his achievements with the program.

Alarcon said he likes “trying to be one of the tops for North Carolina schools and worldwide.”

Dyanara Corrales, another student in Rossi’s class, has also gained worldwide recognition. She said she liked the quick feedback that the program gives her.

“You answer the questions and read the passage, and then you get a little thing that says that you made a 75 or higher,” Corrales said.

Rossi said the students are obsessed with the program.

“I don’t think Bryan and Dyanara are asleep at night. I really don’t,” Rossi said. “I think that they’re just eating, breathing, sleeping and doing Achieve3000.”

Lynnia Stockton and Kiasia Wallace, both students in Rossi’s class, have received statewide recognition for their work in the program.

Stockton said she liked racking up points and she even liked the questions the program asked.

“And trying to help our class win,” she said.

Wallace said even when she gets a question wrong she is still motivated to keep going.

“Every time I get a question wrong, it makes me want to do more and more just to get the other questions right,” she said.

The students have designated time to work with Achieve3000 during class, but they can also work on it at lunch, home and even at recess.

Superintendent Lynn Moody talked about Achieve3000 during the Literacy Summit on Thursday.

“We know that all of the significant data tells us that if a child reads 40 of those articles and completes it, they will significantly change their Lexile reading score,” she said.

She also said the school system wanted to start an initiative to give students who have reached that 40 goal arm bracelets that will declare something like, “I’m in the 40 club.”

Although a logo has not been created yet, Moody eventually wants businesses and community organizations to get involved by displaying a 40 logo and offering students prizes or goodies when they come in with their bracelet. She wants the 40 logo displayed in so many places that people will have to ask about it.

Rossi said Hanford-Dole is proud of what their students are achieving.

“It’s really exciting and it’s really improving their Lexile score and their growth,” she said.

What’s to become of the old Farmhouse?