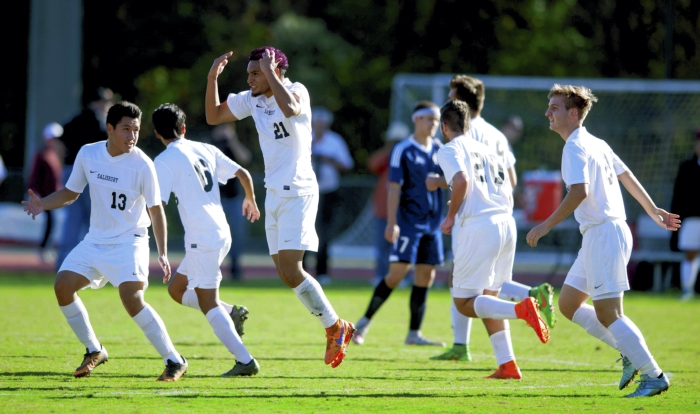 RALEIGH — Open the display case and make room for another well-deserved championship trophy. Salisbury is again the state’s gold-standard bearer in 2A boys soccer.

“It’s getting crowded in there,” coach Matt Parrish said Saturday at N.C. State’s Dail Soccer Field, moments after the Hornets crowned their near-perfect season with a 3-0 triumph over Washington. “I don’t know too many people who can appreciate that piece of hardware more than myself.”

Allow Parrish and the Hornets to crow like roosters. Their fine-tuned performance capped a 27-0-2 campaign, provided the school’s third state title since 2011 and tied an SHS record for most victories in a season.

“From the first whistle, we had no doubt today,” said defender Cristian Uribe, one of 10 Salisbury seniors who set sail on this journey in mid-August and have been traveling first class ever since. “It just took us a while to make sure of it.”

Teammate Landon Goodman — who scored his 66th goal in the second half — was selected the game’s MVP. “As soon as we walked into camp at the beginning of the season, we decided to be a hard-working team,” he said. “Clearly it showed and today was a perfect way to end that kind of season.”

Salisbury finished the year with 17 shutouts, including eight in its final nine matches. A defense anchored by Uribe, halfback Joshua Lynch, defender Reilly Gokey and keeper Arturo Ramirez allowed 14 goals in 29 contests — and just two in six playoff games — helping the Hornets turn the postseason dance into a November-to-remember.

“Give them all the credit they deserve,” losing coach Jim Kozuch after Washington (26-2) had its 18-game winning streak snapped. “Their coach (Parrish) really did his homework. They found our weaknesses and attacked them.”

The Hornets also neutralized striker Freddy Jimenez, a 55-goal scorer and Washington’s most-dangerous player. “What did he get, one shot?” Parrish wondered. “And that one didn’t have much behind it.”

Salisbury, meanwhile, rattled off 17 shots at 6-foot-4 Washington keeper William Tate. Uribe beat him at the 10-minute mark when he took a pass from Lynch and used his forehead to bounce a close-range shot into the cage.

“You want to talk about repeats — I’ve seen that six, seven, eight times this year,” Parrish said. “(Washington) had to have known that coming in. But knowing it and stopping it are two different things.”

It remained an anxiety-filled, test-of-nerves for the rest of the first half and the first 13 minutes of the second. That’s when Salisbury’s Ahmedin Salcinovic collided with Tate at the goal mouth, forcing the referee to stop the clock and send Tate to the sideline with cut on his tongue. “He cut it but it wasn’t really bleeding,”Kozuch said. “The official said he saw blood and that’s why he stopped (the game).”

It proved to be a fateful turn of events for both teams. Tate was replaced by sophomore Kevin Avilia and 55 seconds later Goodman scored on a half-screened grounder to the right side. It doubled Salisbury’s lead and made Goodman’s season total the third highest in state history. Tate returned immediately afterward.

“I had missed a couple of chances earlier,” Goodman said. “But I took a chance there and just flicked it around a defender and got it on goal. It kind of took the charge out of them.”

If it didn’t, Salisbury’s third tally certainly did.  This time, freshman midfielder Brandon Ibanez took a doorstep feed from Melvin Bonilla and chipped an ill-advised shot past Tate. “Parrish said in practice we had keep it low against this goalie,” Gokey said, “because he’s so big he gets to everything in the air. And then Brandon chips it in and we’re all celebrating.”

Ramirez, who made four saves in the Salisbury net, stood back and took it all in. “We always know,” he said. “When it gets to 3-0, it’s light’s out.”

And by the time the match ticked to a close, so was Washington’s monumental season. Tate, for his part, offered praise rather than excuses.

“I guess relentless is a pretty good adjective for them,” he said. “They never stopped moving forward. They were always looking for the next pass.”

When it ended, Salisbury’s players rushed toward the stands to salute their faithful fans, then rejoiced in a celebration of Times Square proportions. Goodman wrote an expedient final lyric to Salisbury’s hit season when he said:

“There isn’t a better feeling than this. I hope I remember everything. I have this medal, this plaque, this shirt — and all the memories that go with it.”