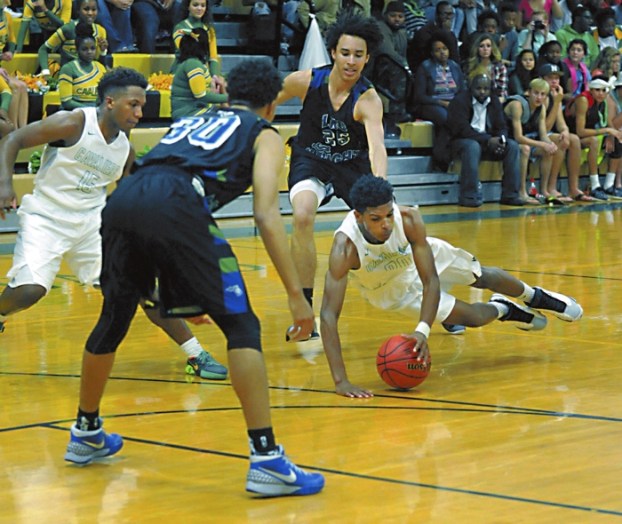 North's Josh Handy 20 dives on the floor for a lose ball. Photo by Wayne Hinshaw, for the Salisbury Post

SPENCER — The scouting report Lake Norman Charter had obtained on North Rowan’s boys basketball team was a good one.
The Knights packed it back in a zone and dared the Cavaliers to prove they could make outside shots.
So North senior Jalen Sanders did. He drilled three 3-pointers in a row in the momentum-turning second quarter, and the Cavaliers were on their way to Friday’s 61-49 victory.
“We hit only two 3-pointers in our first two games, so it wasn’t a surprise that they pulled back in a zone,” North coach Andrew Mitchell said. “I told our guys there will be games where we’ll have to show a lot of patience, but this was a night where we needed to take our shots and shoot with a lot of confidence. Jalen is a special player and a special leader. He shot the ball well.”
It was a nice win for North (3-0), which is not at full strength yet. Lake Norman Charter is a dangerous team, with a host of rangy athletes and a 6-foot-6 junior post man (Grayson Hickert, 17 points) who can rebound and shoot.
“They have seven seniors, and they are going to be very good,” Mitchell said. “I’m glad we got them in their first game of the season. They’ll be tough a week from now and they could make a playoff run.”
While Mitchell wanted his team to be aggressive on offense, he preached patient defense.
“You gamble against Lake Norman Charter and you’re going to give up a lot of drives and open 3-point looks,” Mitchell said. “I thought we were very patient. They didn’t get many open 3s.”
When Hickert scored on a stickback early in the second quarter, Lake Norman Charter led 17-13, but that was where the visitors peaked. Sanders had a world-class second quarter, accounting for all 15 North points with three made 3-pointers and three assists on 2-point baskets. Joseph Scott had two finishes off Sanders’ dishes, while Alonzo Sirleaf had a beauty on a fastbreak.
Sanders propelled North to a 28-19 halftime lead.
When Sanders and Josh Handy knocked down back-to-back 3s early in the second half, they gave the Cavaliers a secure 36-22 lead. North would go on to lead by as many as 21 points before LNC battled back some in the final quarter.
North’s goal was to hold Lake Norman Charter under 45 points, but the visitors made 11 free throws in the fourth quarter to foil that plan.
On the play of the night, Scott and Handy went up for a volleyball-like combination block to erase a Lake Norman Charter drive.
“There was a lot of good defense played, and defense is what I’m focused on and what this team is focused on,” said Scott, who scored 14 points. “Defense and sharing the ball wins games. We did those things well.”
North won 48-38 at Charlotte Harding on Wednesday in a game that Mitchell said was a struggle. Scott scored 16, while Sanders was held to 13.
“Fortunately, we’d scrimmaged with Winston-Salem Prep and Vance, so we were prepared,” Mitchell said. “When you play those Charlotte teams, it’s physical. It was almost like a fight.”