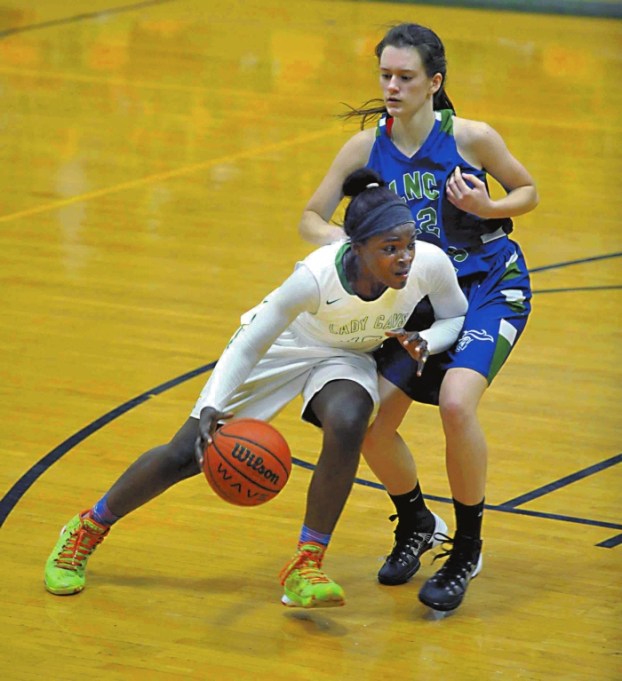 SPENCER — North Rowan’s girls basketball team missed 30 free throws on Friday.
They still found a way to beat Lake Norman Charter 61-58, mostly because 5-foot-9 senior Aliyah Farmer scored a career-high 26 points.
“People that always make free throws were missing free throws,” Farmer said. “Everybody was getting frustrated a little bit, but we made some when we had to.”
Coach Brian Lytton stared at a scorebook that showed the Cavaliers went 23-for-53 from the foul line, and the scorebook never lies.
He groaned a little, but the bottom line was that North improved to 3-0 without two injured players who will be in their fast-paced rotation — Payton Russell and Tre Allen.
“It’s tough to beat a good team when you leave 30 points out on the floor,” Lytton said. “But Aliyah was great. She almost carried us tonight. And our bench came through. I was really proud of Tanajah Robinson.”
Robinson made the night’s two biggest free throws — a pair of rainbow when the Cavaliers were clinging to a one-point lead with 18 seconds left.
“Our bench really helped us,” Farmer said.
Lake Norman Charter (0-1) presented problems for North because its guards were good enough to handle the Cavaliers’ fierce pressure, and the Knights had a finisher in 5-foot-10 Sarah Novroski, who poured in 26 points.
They’ve got a good point guard and a good big.” Lytton said. “That made it a hard game for us.”
North (3-0) needed 14 first-half points by Farmer to lead 29-27 at the break, and Lake Norman Charter was on top 41-40 after three quarters.
The Cavaliers were a little stunned.
“We beat them easily last year (66-20), so we weren’t expecting the kind of competition we were getting,” Farmer said. “They surprised us. They’ve improved a lot.”
Two free throws by Brianna White gave North the lead for good at 44-43 lead with 6:38 remaining.
When Farmer made two free throws for a 58-52 lead with under a minute left, the Cavaliers appeared to have a safe lead, but it melted away with misses. When Carly Russ made a 17-footer from the right wing for Lake Norman Charter with 23 seconds left, she cut North’s lead to 59-58, and she was fouled on the shot.
The Cavaliers were fortunate that Russ missed the free throw that would’ve tied the game.
White missed two free throws with 21 seconds left, but Robinson got the rebound, and then she made two free throws for a three-point lead.
LNC guard Jennifer Williams got a decent look at a 3-pointer to tie in the final seconds, but she missed off the front rim. After a stickback failed, Aundrea Godfrey claimed the rebound for the Cavaliers.
“We missed too many free throws, but we did a good job of rebounding against their big girls,” Farmer said.