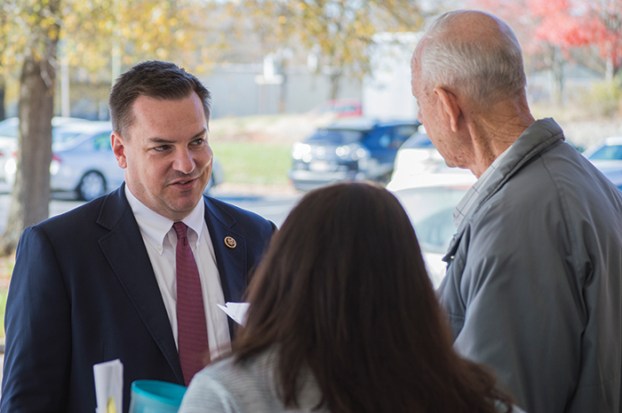 When Rep. Richard Hudson first started drafting his refugee bill, he didn’t quite expect it to become the talk of the nation.

“At the beginning, I was just trying to get people’s attention to get a hearing,” Hudson said Friday after an event in Salisbury. “You feel sort of like the guy with the lantern walking down the street at night looking for an honest man. I’m not saying anyone was dishonest, but it was kind of a lonely feeling of trying to draw attention to the issue.”

At the time, FBI Director James Comey had just said the federal government didn’t have the ability to conduct thorough background checks on refugees. Hudson — a Republican who represents the 8th Congressional District — said ISIS had also threatened to use the small flow of refugees to conduct a terrorist attack.

“I took them at their word,” Hudson said. “If someone gave you 10 cookies and two of them were poisoned, would you eat any of them?”

One month after he began working on his bill, a burst of terror attacks in Paris killed 129 people and wounded hundreds more. The sites attacked were labeled “soft targets” — areas with relatively little security, such as restaurants. One of the nine attackers posed as a Syrian refugee when entering Europe.

The Paris attacks quickly politicized the issue of whether America should accept refugees fleeing war-torn areas of the Middle East.

Senior leaders in the U.S. House asked Hudson about his bill immediately following the Paris attacks. Hudson introduced the bill — the American SAFE Act of 2015 — two days after the inquiry. He said the terror attacks “flipped a switch.”

“Suddenly, everyone in America was paying attention to this issue,” Hudson said.

As the bill sped through committee, Hudson garnered public support from Gov. Pat McCrory — one of at least 30 governors in the nation who publicly stated their opposition to accepting refugees. McCrory didn’t have an official vote on the matter, but made his opinion known at every turn.

“Because President Obama has increased the number of refugees from Syria coming into the United States from 2,000 to 10,000 and because of the terrorist attacks in Paris and the very real possibility that one of the terrorists entered France as a recent refugee, I am requesting that the federal government cease sending refugees from Syria to North Carolina,” McCrory said this week.

Hudson’s bill was tweaked slightly in committee. It picked up the support of Homeland Security Committee Chairman Michael McCaul, R-Texas. At its core, the bill maintained the same basic purpose: require the FBI to conduct background checks on people coming to the U.S. from those countries and oblige the heads of the FBI and Homeland Security Department and the director of national intelligence to certify to Congress that each refugee “is not a threat to the security of the United States.” Hudson’s bill would, in effect, suspend admissions of Syrian and Iraqi refugees into the United States, which has already accepted an estimated 2,000.

As the bill began to pick up steam in the U.S. House, it quickly received a veto threat from President Barack Obama. However, members of the U.S. House ignored Obama’s order. Hudson’s bill passed 289-137, with 47 Democrats in favor. The margin was more than the two-thirds requirement to override a veto and provided some confidence to GOP leaders as the bill moves into the U.S. Senate.

Hudson said he’s heard from a large array of critics, supporters and constituents since introducing the bill. A smattering of the initial calls were harshly critical, he said. As the week drew on, more calls were supportive.

“We got some calls, especially early on, from people saying shame on you for banning refugees, shame on you for not letting these poor men, women and children in,” he said. “Once we explained to them what the bill did, almost every single caller said ‘Oh, I support that.'”

As he was traveling back to North Carolina on Thursday, Hudson said he was stopped in the airport by a supporter who thanked Hudson for his bill.

With a House victory in its pocket, Republican leaders in Congress now head to the Senate with Hudson’s bill, but it’s unclear whether the bill would even come up for a vote.

Senate Majority Leader Mitch McConnell, R-Ky., has slotted the House bill for possible Senate consideration and said pausing the refugee process would be “the most reasonable and balanced thing for the administration to do.”

At least six Democrats would have to join Republicans to push it through the Senate and 13 Democrats would be needed for a veto-proof tally — which the chamber’s top Democrat painted as far-fetched.

One top Senate GOP aide said it was unlikely that chamber would consider the House bill. The aide said senators were more concerned about potential weak spots in a program that lets foreigners enter the U.S. without visas from 38 countries for short stays.

U.S. Senate candidate Kevin Griffin summed up his stance on whether America should accept refugees with one sentence when speaking... read more