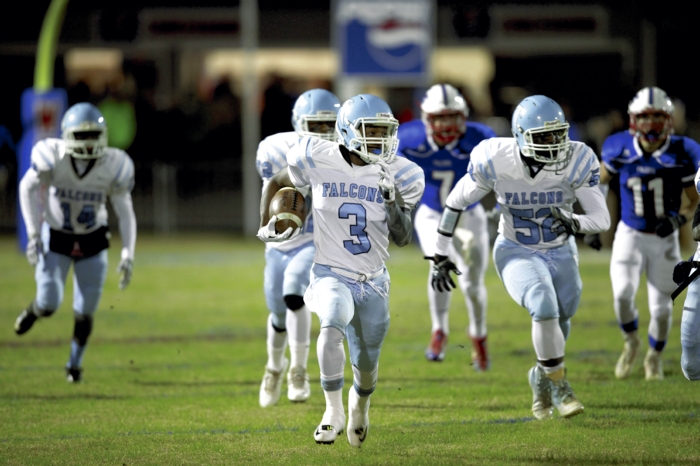 HENDERSONVILLE – West Rowan took advantage of five West Henderson turnovers and advanced to the third round of the NCHSAA 3-A playoffs with a 41-19 win Friday night.

West Rowan scored three touchdowns in the first 11 minutes to take a 20-0 lead.

Jovon Quarles took the opening kickoff, went to the right sideline and sprinted 92 yards for a touchdown. The extra point was no good and West Rowan led, 6-0, just 14 seconds into the game.

“To take the long ride up and then to start the game off with a kickoff return touchdown was great for our sidelines,” said West Rowan coach Joe Nixon, whose team improved to 10-3.

West Henderson fumbled on its second play and the Falcons recovered on the West Henderson 36. West Rowan then drove 36 yards in five plays, scoring on a 15-yard run by Kacey Otto. Austin Morrison’s kick was good and West Rowan led, 13-0, with 9:02 left.

West Rowan took advantage of another fumble by West Henderson, recovering at the 45. Kacey Otto gained 24 yards on third down and 14 from the 49 to keep the drive alive. Quarles eventually scored from the one-yard one for a 20-0 lead, still in the first quarter.

Tanner Bullock scored the first of his three touchdowns for West Henderson to cut the West Rowan lead to 20-7 in the third quarter.

But the Falcons came back with an 18-yard touchdown pass from Otto to Kortez Weeks and then Theo Fisher scored on a 22-yard interception return to give West Rowan a 34-7 lead.

The Falcons’ final touchdown came when Jai Hogue took an onside kick attempt on the run and sprinted 47 yards untouched for a score with 28 seconds left.

“Too many mistakes early against a good football team. We haven’t done that all season,” said West Henderson coach Paul Whitaker, whose team finished 9-4. “But congratulations to a good West Rowan team.”

Quarles led the West Rowan ground attack with 97 yards on 21 carries while Otto had 72 yards on 16 attempts.

Bullock rambled for 191 yards on 22 carries.

Again, West Rowan did a lot of its damage with two kickoff returns for scores and the pick six by Fisher.