The future of China Grove, according to first graders 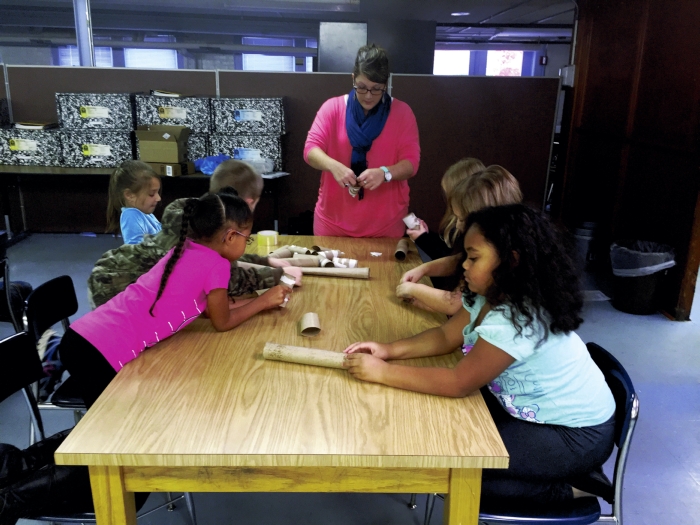 Amber Rouse helps her students turn toilet paper and paper towel rolls into tree trunks and light poles for their model building. China Grove Elementary School first grade students are constructing a model of what they think China Grove will look like in the future. Amanda Raymond/Salisbury Post

Lineberger guided the students through the things they would need to create a parking lot for the building they were constructing.

“What are some things you need in a parking lot?” she asked the students.

“You could probably put little lines to make a parking lot,” one student suggested.

“Places where people could walk,” another student said.

After also coming up with adding bumpers and light poles to the parking lot, the students were ready to start creating their version of what China Grove would look like in the future.

China Grove Elementary School’s first-grade students are building a model of the future of China Grove, as part of a project-based learning activity.

The students are using recycled materials to construct models of different buildings in China Grove.

One of the common core standards for the first grade is explaining how and why communities change over time.

To cover that standard, Rouse said the teachers came together during a planning period and came up with this project.

“The question was how to keep families in a small town. All the families are leaving. They’re going to big cities like Charlotte and Salisbury. How can we keep them in a small town? What can we do to make it better?” Rouse said.

The students went on a walking tour of China Grove about two weeks ago. They scanned QR codes for clues on what buildings they needed to take pictures of with their iPads. The students ended up taking pictures of buildings like St. Mark’s Lutheran Church, the fire station and No Way Jose’s Mexican Restaurant.

Rouse also showed her class a presentation about how things change over time, from buildings in a town to toy phones.

Rouse’s students made a lot of the decisions for the project. They voted on which building out of seven options that they wanted to work on, which ended up being the China Grove Roller Mill.

While in art class, the students were allowed to vote on whether they wanted the outside of their building to be made of brick or stone. They put their heads down on the desk and raised their hands for their choice.

They decided to go with brick.

Teachers and parents donated cookie, pizza, cereal and cracker boxes, as well as paper towel and toilet paper rolls for the project.

After the planning process, the students got to work. With three different stations, some students worked on cutting up toilet paper and paper towel rolls and rolling them into tighter rolls to create tree trunks and light poles. Another station of students taped the cookie boxes together to make the frame for the building, and the last station drew outlines for the parking lot.

Rouse said the students will continue to work on the project during the first two weeks of December.

“Really we’re only hoping it takes three weeks but as you can see it moves pretty fast,” Rouse said. The students only get 30 minutes to work on the project, which quickly dwindles down because of time spent explaining directions and cleaning up.

“The more people I can have helping the kids, the better it will be,” she said.

There will also be a written portion that will go along with the project.

As the students planned, voted and created their building, one student summed up the thoughts on the project: “This is going to be fun.”