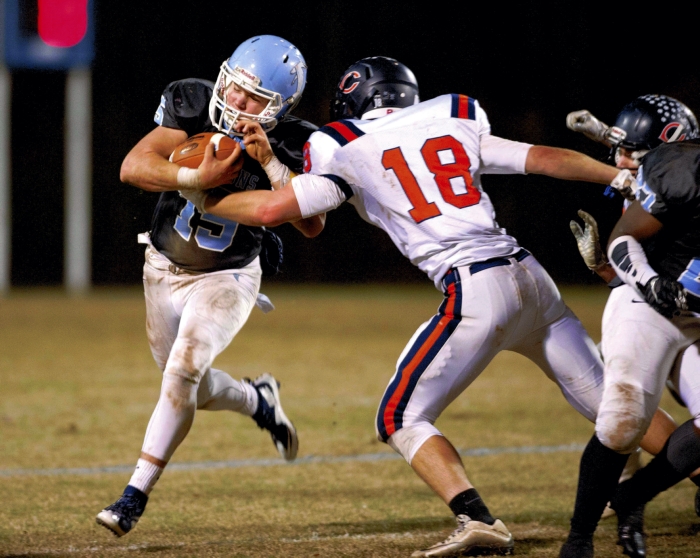 Last week’s prep picks were 4-0 and are 60-10 for the season, although it’s not like there weren’t serious surprises.
Carson and West Rowan going to overtime for the second straight season in Mount Ulla defied all odds. North Rowan took the expected loss at Winston-Salem Carver, but the Cavaliers led, 14-0, early. Davie’s tremendous effort in a 44-36 loss at Scotland County exceeded expectations. A.L. Brown rode Sandon McCoy and hung on, 35-32, against Reagan in a game just as tight as everyone expected it to be.
The second round round is tonight.
As lower seeds, West Rowan (3A) and A.L. Brown (4A) are on the road for 7:30 games, but both have a good chance to win.

No. 6 West Rowan (9-3) at No. 3 West Henderson (9-3)
This is the first meeting of the schools in football.
WEST HENDERSON COACH: Patience pays off sometimes. Coach Paul Whitaker was an assistant 17 years before getting his chance as head coach at a mountain school that didn’t have a winning tradition.
Whitaker didn’t create an immediate turnaround after being promoted in 2010. His 2013 team struggled to 1-10, but then his 2014 team was 8-5. That team claimed the school’s first playoff victory in 24 years before losing, 27-21, at home to East Rowan in the second round. Whitaker was named USA Today’s N.C. Coach of the Year for 2014.
This season West Henderson’s Falcons — yes, they’re the Falcons too — have improved a little more.

OUTLOOK: West Rowan’s three losses were to 4A Mooresville on opening night and to SPC foes Concord and Hickory Ridge late in the regular season.
The Falcons are 4-2 playing away from Mount Ulla.
West Rowan survived a 28-27 OT struggle with Carson in Round 1.
The defensive numbers for the teams are similar, but with quarterback Kacey Otto and receivers Kortez Weeks and Juwan Houston, West Rowan has the more explosive offense and the more balanced offense. Speedy running back Jovon Quarles is also capable of a big performance in a big game.

SOUTH CALDWELL COACH: Butch Carter believes in old-school, no-frills football and his maroon-and-platinum Spartans run the Wing-T to perfection. South Caldwell is a perennial power in its area and is 49-24 during the last six seasons.

TENDENCIES: South Caldwell runs the ball 94 percent of the time. It has attempted just 20 passes all season, although it’s worth noting that it has completed 14. The Spartans do run it extremely well. They have 2,200 yards on the ground.

STANDOUTS: Landon Dickerson, a 6-5, 306-pound lineman is being recruited by SEC schools and is rated as one of the nation’s top guards.
Tyler Goins, a 200-pounder, has been the most prolific running back, but the Spartans run the ball by committee. Quarterback Jenson Weaver has been an effective runner.
Linebacker Miller Kirkpatrick has 13 tackles for loss.

OUTLOOK: The Wonders, who have lost only to 4AA powers Mallard Creek and Hough, have played the last two games without explosive Jayln Cagle, but they’ve been getting it done with a sledgehammer power game featuring Sandon McCoy (1,250 rushing yards). It’s possible Cagle may return tonight.
McCoy and Cameron Rodgers have been playing both ways virtually every snap for a determined team. With some big plays from QB Damon Johnson (14 TD passes), the Wonders could advance another round.
The Wonders are 5-1 on the road. They’ve won three straight since back-to-back losses to Hough and Mallard Creek.
Both teams will be out to control the ball. Both teams have scored more than 400 points, but the Wonders have significantly better defensive numbers.