Taking court to the people 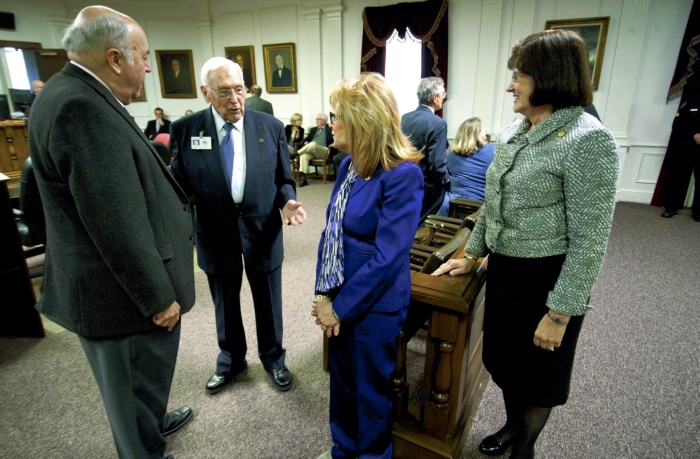 You could learn about appellate courts by studying books and hearing lectures. But witnessing an actual session of the N.C. Court of Appeals, with attorneys presenting arguments and judges raising questions, brought a civics lesson to life for more than 100 students in a Rowan County courtroom Wednesday. The same goes for attorneys and other spectators who filled the Superior Courtroom for the historic event.

Even retired Resident Superior Court Judge Thomas W. Seay Jr., who served three decades on the bench in Rowan, said it was the first time he’d seen the Court of Appeals in action. “It wasn’t in existence when I went on Superior Court in 1967,” Seay said.

Before the court held its first-ever session in Rowan County, Chief Judge Linda M. McGee led a brief Q&A session, with Judge Linda Stephens and Judge Robert N. Hunter Jr. taking queries too. Students came prepared with good questions. Who chooses the cases for the court to hear? Why is there a panel of three judges to hear Court of Appeals cases instead of one, as in the lower courts? How long are the judges’ terms? Is it true, as the newspaper reported, that the court considers matters of law and not of fact?

The Court of Appeals holds periodic out-of-town sessions to help the public learn how it works. The cases they brought to Salisbury presented challenging issues that the judges said afterwards might take more than the usual 90 days to sort through. In one, a man is appealing his conviction for buying Sudafed containing pseudoephedrine after previously being convicted of possessing methamphetamine — without sufficient notice, his attorney argued, that a new law barred people with meth records from buying the drug, which can be used to make meth. Can a person be expected to know about a new, fine point of law if it’s not posted in the usual places? Ignorance of the law is no excuse, but did this man get due process?

The other case concerned the estate of a Charlotte man, La-Reko Williams, who died after police shocked him with a Taser. A young woman says she had a child with Williams and believes her son is his heir. Williams’ mother believes otherwise, and a $500,000 court award stands in the balance. The simple solution, a DNA test, was not included in the law about determining such cases until after the child was born. Is the child being treated unfairly because of an arbitrary date?

The cases are far more complicated than can be summarized here. Suffice to say they were neither dry nor boring. The decisions the judges eventually hand down will affect people’s lives for years to come.

Many thanks to the two who invited the Court of Appeals to town, Senior Resident Superior Court Judge Anna Mills Wagoner and local bar President Kathryn Setzer. They have helped Rowan get a better understanding of the appellate courts and the judges who grapple with crucial matters of law.