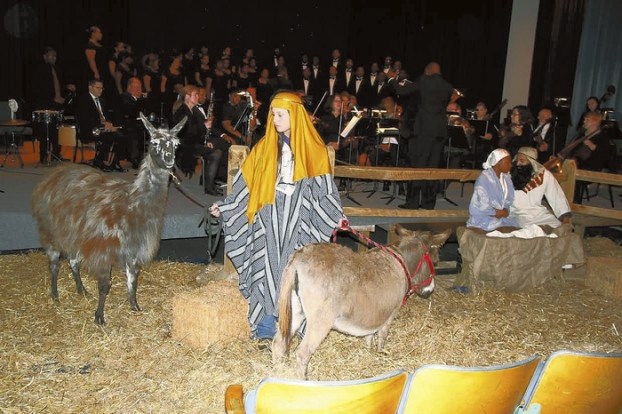 What? “Miracle on Monroe Street”

“Christmas is a blessed, joyous time during which we celebrate the birth of Christ,” Jenkins said. “It’s also a festive period as children anxiously await Santa’s arrival, people shop for just the perfect gifts and families gather to enjoy hearty meals and fellowship.

“An outstanding Christmas concert is the perfect event to jump-start the holiday season, and on Dec. 5 at Livingstone College that’s precisely what will transpire,” Jenkins continued. “With the help of David Hagy and members of The Salisbury Symphony, our students and faculty have produced an extraordinary show that’s guaranteed to excite while demonstrating the true reason for the season.”

This year’s concert begins at 7 p.m. in Varick Auditorium. Tickets are $20 for adults, $10 for seniors 60 and older, $10 for children in grades one through 12 and free for children 6 and under.

Titled “The Messengers: Miracle on Monroe Street,” the Christmas Extravaganza will feature the Livingstone College Concert Choir, led by Dr. DaVaughn L. Miller, students in the school’s Theater and Dramatic Arts Department, led by Michael D. Connor, members of the Salisbury Symphony and live animals. The play’s script was written by Curtis Dean, an assistant professor of business who has served as musical director on Broadway for several productions.

“There’s a large part of our community that almost expects Livingstone to take a lead role in providing a Christmas event … and I’m pleased they’re trying to present something for the Christmas season that the public can enjoy,” said Hagy, who will conduct the orchestra during the concert. “DaVaughn Miller, Curtis Dean, Michael Connor and the students are working hard to put this on.

“It’s not my hard work that’s carrying it as much as it is theirs, and you have a very special person in DaVaughn Miller,” Hagy continued. “He’s organized, he knows what needs to be done, he’s personable and he’s extraordinarily musical. … It’s important the public realizes that Livingstone has certain gems that are making this Christmas Extravaganza possible, and of course none of this would happen without the support of Dr. Jenkins.”

Dean said he agrees with Jenkins that this year’s version of “Miracle on Monroe Street” is the perfect way to kick off the Christmas season.

“When you think about the messengers, it kind of gives the story of Christmas past, Christmas present and Christmas future,” Dean said. “We’re trying to help the three wise men continue the Christmas story by transitioning them into the modern day world. With a dynamic student cast, this production will surely set the tone and put the audience in the spirit of Christmas. I join Dr. Jenkins in saying we hope that Salisbury residents and those from neighboring cities will file into Varick Auditorium on Dec. 5 to witness Livingstone College students, faculty and staff putting on a Christmas show for the ages.”

In keeping with tradition, there will be a special tree lighting ceremony on campus after the Extravaganza.

American Legion post donates $8,000 worth of items to VAMC