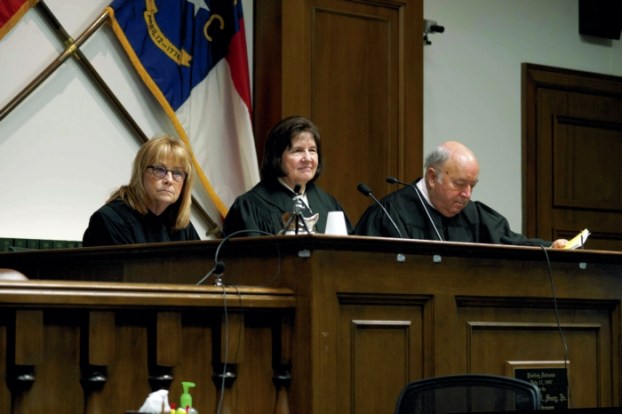 Court of Appeals convenes in Salisbury for first time The N.C. Court of Appeals held a session in Salisbury for the first time in the court’s 48-year history Wednesday, packing a courtroom with eager students and curious onlookers who were geared-up to watch this elusive part of the judicial process in action.

The North Carolina Court of Appeals has 15 elected judges that serve on panels consisting of three judges, and hears over 1,600 cases of appeal each year.

The court tries to hold a few sessions a year outside of Raleigh, and the panel of appellate judges that visited Rowan County yesterday invited students from local schools and were happy to answer questions before and after it heard the two oral arguments.

“This is truly a rare opportunity for us,” Chief Judge Linda McGee said.

It’s rare for students to be able to attend appeals cases when the court is headquartered in Raleigh, she explained. Before court was in session, McGee explained that when the Court of Appeals travels, they pick a criminal case and a civil case to showcase how the court handles each.

The North Carolina Court of Appeals is an error-correcting court and only studies cases as they are applied to the law — they do not find fact.

“We look for errors of law,” Hunter said.

While the court considers all appeals cases, they choose the cases they hear for oral argument very carefully, McGee said.

“We’re looking for cases that we think can make a difference,” she said.

These are cases that either challenge new laws, or illustrate how new laws can affect a person’s life, or deal with areas of law that are still unestablished. The Court of Appeals also offers mediation and alternate dispute resolution if people wish to settle their matters without going through an appeals court.

“Sometimes it makes a difference in how they see their case,” Hunter said, “sometimes they just want it resolved.”

The first case the panel heard Wednesday was a criminal case in which an Ashe County man, Austin Lynn Miller, was convicted in trial court in 2014 of purchasing a product containing pseudoephedrine after previously being convicted of possessing methamphetamine.

Miller chose to appeal the case because the law regarding the purchase of products containing pseudoephedrine by a methamphetamine possessor changed a month prior to Miller’s purchase, and Miller was not notified of the change. Miller was represented by Jeffrey William Gillette.

State regulations regarding the purchase of products containing pseudoephedrine used to be posted on the walls of pharmacies according to state statues, Gillette explained. The regulations then changed so that people convicted of making or possessing methamphetamine were registered in the computer, and the amount they purchased was closely monitored.

In December 2013, the General Assembly passed a statute prohibiting people who were convicted of possessing methamphetamine from purchasing pseudoephedrine at all. Miller, Gillette argued, received no notice of this change in his legal status, and so was charged with a felony when he went to purchase Sudafed in January 2014. Neither Miller, nor the pharmacist, nor Miller’s probation officer were aware of the change, Gillette said.

“He lacked notice of law,” he said, “the law that made him criminal.”

Jill Cramer with the State Attorney General’s Office asserted that state statues are published and available to all citizens. As a convicted felon, and someone who is more strongly affected by changes in law, Miller should have been paying close attention any changes in legislation, she said.

“He’s on notice because he’s a citizen,” she said.

The judges questioned each side closely. Miller’s lawyer requested that his conviction in trial court be vacated and the law adjusted to make sure that pharmacists are notified of the change in state statute so that they are able to inform their customers.

The second case the panel heard was a civil case regarding the estate of La-Reko A. Williams of Charlotte, who died in 2011 after a police officer shocked him with a Taser. Wrongful death damages were awarded to his parents after they pursued the case in court. A young woman said Williams had a 3-month-old son out of wedlock when he died. The child’s mother wanted her son to be considered an heir in Williams’ estate, but Williams’ parents — the administrators of his estate — doubted the child’s legitimacy.

The case went to Superior Court, where the court handed down the decision that the child, Kamari Krider, was not entitled to Williams’ estate. The mother filed for an appeal, represented by Paul Tharp of Gaston County.

Kamari’s mother, Khadaijah Chardonnay Krider, sat silently with him on the front row in the courtroom Wednesday.

The state has a statute which states that children who are born out of wedlock can be eligible heirs for their father’s estates if they are either legitimized by the father or can prove paternity through DNA testing; however, the statute is only effective after June 26, 2013 — which means it does not apply to Kamari. Tharp called for the court to remove the effective date so that the child would be eligible for legitimization.

The administrators of Williams’ estate, Temako McCarthy and Victor A. Williams, were represented by Charles Ali Everage of Charlotte, who said that Williams’ actions prior to his death indicated that he doubted the legitimacy of the child. Williams signed an affidavit at the hospital, but did not file it with the Clerk of Superior Court, or take any other actions, of which he was orally informed of at the hospital, to legitimize his parentage.

Tharp said that the mother consistently requested DNA testing to prove that Williams was the father of her son, but the administrators of Williams’ estate had denied the request.

From benches in the back, several local high school classes kept a close eye on the back-and-forth between judges and representatives. Chad Mitchell teaches AP American Government at East Rowan High School, and said that when the school received an invitation to attend, he couldn’t pass it up.

“We thought this would be a great opportunity to bring the kids out and see how the court system operates,” he said.

It’s one thing to talk about oral arguments in class, Mitchell said, but being able to see it in action added a new dimension to learning.

McKenzie Stephens, a junior at East Rowan, said that being able to watch the court helped cement the things she learned in class.

Max Clark, a senior at East Rowan, made sure he studied the cases beforehand, and came prepared with questions for the judges.

“Having been given the opportunity to come here I thought I should be as educated as possible,” he said.

Clark read the briefs and formed his own opinions on the cases before he arrived, but he said that seeing the oral arguments and the way the judges questioned each side swayed him.

“I think it was incredible to watch this whole process,” he said.

Wagoner said afterward that the session went “fantastically great.” She felt that it was informative for everyone who attended, and that the cases didn’t have concepts that were too difficult for the high school students and others who came to observe.

“It’s nice to see civics in action,” she said.

American Legion post donates $8,000 worth of items to VAMC