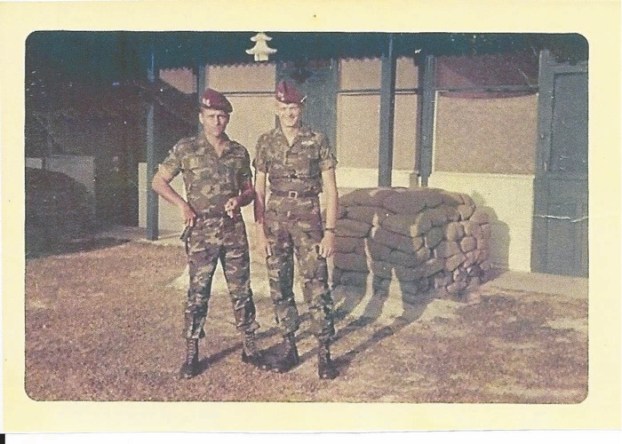 When I returned from the Vietnam War in 1968, I went back to school at Purdue University. There I immediately became aware of the anti-war effort that had developed at home.

I did not then, nor do I now, object to informed opposition to the war directed at our elected officials to convince them to change national policy. Some of my close friends fall into this category of informed opposition. Even the students burning their draft cards were exercising their right to free speech guaranteed by the Constitution. But I find it deplorable that so many of our returning troops were met, called names, spat upon, and jeered at by uninformed hecklers to the point that some returning veterans were made to feel their service to their country was considered criminal.

I was called “baby killer” many times. Where did that come from?—unknown, but perhaps from an unfortunate incident at Mỹ-Lai, Việt-Nam which was well publicized at the resulting murder trial at Fort Benning, Ga. However, the only atrocities I personally witnessed while in Vietnam were committed by the Vietcong (VC). Among the worst was the slaughter of a Village Chief and his family of five in a small village near the city of Bến-Tre in the Mê-Kông River Delta.

In 1972, I was assigned to escort the body of a Việt-Nam casualty back to West Point for burial. I had to wear my uniform and carry a flag for draping the casket. At the San Francisco airport, I was jeered with “oink-oink” sounds behind my back from two airline pilots. Fortunately, my orders were not to react to provocation by hecklers. Otherwise, I might have been tempted. But the incident made me doubt the sanity of some aspects of the anti-war movement even more because the casualty I was escorting had been murdered by the VC—the typical execution by a 22-cal pistol shot behind his left ear.

In 1969, the Paris Peace Talks seemed to be achieving nothing. President Nixon, despite huge pressure at home, decided to get tough. Over the next few years, he authorized bombing and invasion of former sanctuaries in Cambodia and Laos, mining of Hải-Phòng Harbor and other ports, and large-scale bombing of strategic targets in North Việt-Nam—too little, too late, but it successfully ended the war for the US. In Paris on January 27, 1973, a peace agreement was reached leading to (a) withdrawal of all US troops in 1973, (b) cutting much of the financial aid to South Việt-Nam in 1974 (which destroyed their morale), and ultimately (c) the fall of Sài-Gòn in 1975.

The North Việt-Nam General lived to age 102. Võ-Nguyên-Giáp is reputed to have once said or written, “Why did you stop bombing Hà-Nội? We were ready to surrender. You had won.” I can find no proof of his ever having said or written this, but I do not doubt he may have felt it from time to time with the huge casualties they were taking. However, it is believed far more likely the North Vietnamese were viewing the US anti-war protests, were aware of some of the aspects of a democracy, and were content to observe until US Leaders were no longer able to mobilize the will to win.

Had we known what was to happen during those 50 years, would we have done things differently? Should we now? Maybe so; maybe no. Your call.

The Berlin Wall came crashing down in 1989. Final collapse of the Soviet Union followed in 1991. At the Kremlin, the Soviet flag was lowered for the last time on Dec. 26, 1991, replaced by the old Russian flag. It signaled complete failure of the world’s great experiment in communism. They went bankrupt because of the costs of maintaining a massive active army and the costs of the nuclear arms race—not to mention that they attempted to supply all their people with everything, thereby destroying productivity. Why should people work when the government gives them everything? Communism destroys personal innovation.

Even China seems to be loosening up. In 1997, at the end of a 99-year lease, control of Hong Kong Island passed from Great Britain to the Chinese government in Beijing. It has been tough going, but there are definite leanings toward democracy—especially in Hong Kong but also in the remainder of China. People now receive at least some encouragement to work and invest for themselves. I recently bought products on EBAY—from someone in mainland China.

It would be comforting to see, in the U.S. government, a recognition that Communism destroys productivity — followed by a return to major enhancement of job creation and, among all of us who are able, encouragement of a work ethic that helps our country reach maximum productivity.

Baxter Mowery, a native of Salisbury, graduated from Boyden High School and the U.S. Military Academy. From 1967 to 1968, he fought with the 41st South Vietnamese Ranger Battalion, II and IV Corp Tactical Zones, in Vietnam.

Taking court to the people

You could learn about appellate courts by studying books and hearing lectures. But witnessing an actual session of the N.C.... read more