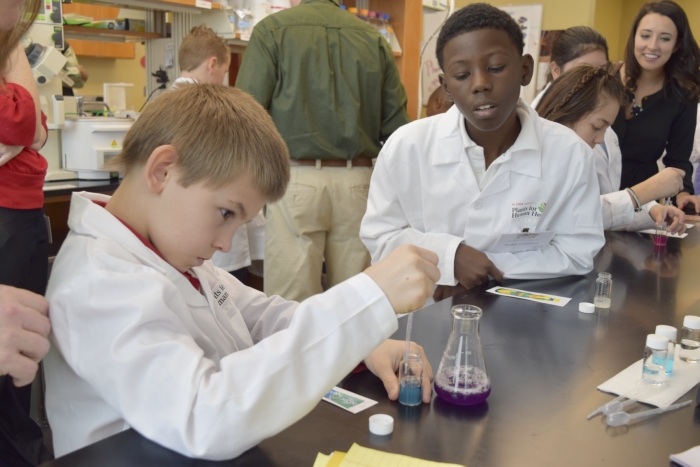 Hunter Moore and Tymell Crosland work to change the pH of anthocyanins--a pigment found in foods like blueberries and red cabbage that changes color based on its pH. Rebecca Rider/Salisbury Post

KANNAPOLIS — Don your lab coats and snap on your latex gloves because kids in Kannapolis are brewing up their curiosity in laboratories at the North Carolina Research Campus.

Tuesday, fourth- and sixth-graders from Kannapolis City Schools were invited into the Plants for Human Health Institute by N.C. State University to get a behind-the-scenes look at what it means to be a scientist.

The program, called Scientists for a Day, is the brainchild of Doug Vernon, the Greenhouse Operations and Outreach Specialist for N.C. State at the research campus. Vernon said that normally, his outreach projects involve community gardens, but when he started this job a few months ago he saw a chance to inspire aspiring scientists.

“You know, we have a great opportunity to support kids,” he said.

Two children were chosen from the fourth grade of each elementary school in the Kannapolis City School system, along with two sixth-graders from the intermediate school, and are selected based on their interest in science said Megan Bame, extension associate in communications for N.C. State at the Research Campus.

Jackson Park Elementary School S.T.E.M. teacher Jacki Lane said that teachers nominated students who had a particular interest in science. Whether they take the reins in classroom experiments, are passionate about the outdoors, or incurably curious about science, Lane said, it’s the kids who are taking that extra initiative to pursue a passion for science inside and outside of class who are invited into the laboratory.

“They’re jumping in there,” Lane said.

The program is also a good way to give students a boost and support if they don’t have access to the same opportunities outside of school as others, Lane said.

Tuesday, fourth-graders tugged on lab coats and pinned on name badges before heading into laboratories in the Plants for Human Health Institute at the N.C. Research Campus.

Guided by lab personnel, the students asked questions about the experiment and about the complicated equipment that decked the counters. Many of them couldn’t believe they had the opportunity to work in a lab.

Fourth grader Nadia DaCostsa says she gardens and composts at home, but she never expected to have this opportunity.

But she enjoyed the day, and said she was fascinated hearing scientists explain their research and what they hope it will accomplish.

Nadia said that when she gets older, she wants to work with plants.

Bryan Ellis said he enjoys math and science, and even has a science kit at home — but this is the first time he’s really been able to experiment like this.

“I like to see what the reactions to different chemicals are,” he said.

Bryan said he’d like to work in a lab like the ones he visited Tuesday, or maybe become a paleontologist.

Looking at the students bent over their lab tables, carefully marking their results onto paper, Vernon said this is what the “Scientists for a Day” program is about.

“It’s really about inspiration,” he said.

Vernon hopes “Scientists for a Day” will become a regular event. He said he hopes to invite students from Kannapolis elementary schools three times a year — or once every quarter. He hopes to extend the program to spring semester middle and high schoolers as well. The main thing is, he said, to fuel students’ passion and fire for science.

If the program works, Vernon said, who knows, maybe one of the students will return, a scientist in their own right.