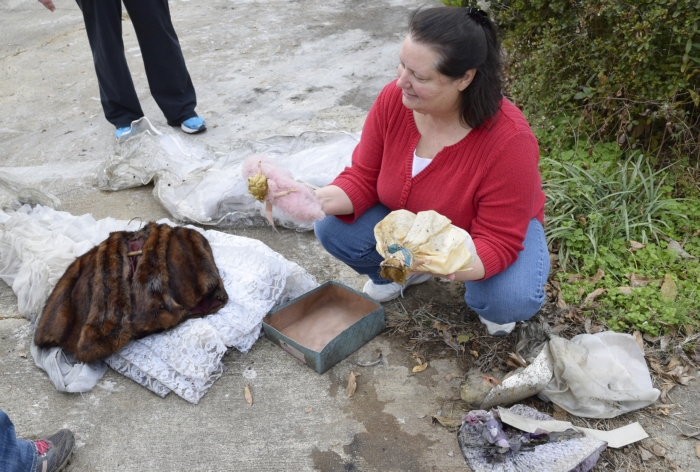 Ouida Davis looks at Madame Alexander dolls and a mink jacket that survived a fire at her mother's house Tuesday night.

The Bringle Ferry Road house that many know for its colorful Easter cross will continue the tradition despite a destructive fire that raged through late Tuesday, Ouida Davis says.

The house, located in the 3000 block of Bringle Ferry Road, belongs to Davis’s mother, Ruby Goodman. Goodman owned a bridal store and a quilting store in downtown Salisbury, and was the mind, and the green thumb, behind a cross-shaped flowerbed in the yard that bloomed every Easter.

The fire began in the attic Tuesday night, Deborah Horne from the Rowan County Fire Marshal’s Office said, and almost completely destroyed the roof, doors and windows. The fire marshal’s office later told WBTV that squirrels nesting in the attic may have chewed through electrical wiring and caused the fire.

Davis is just thankful that her mother wasn’t in the house at the time.

“Things can be replaced,” she said, “people can’t.”

Goodman suffered a stroke in September 2014 that left her unable to walk and in need of around-the-clock care. So she was moved into a little cottage next door to the house she built with her husband in 1974. Davis says the old house was going to be remodeled so that Davis and her husband could move in and be closer to Goodman.

They were hoping the process would be quick, until a neighbor knocked on their door at about 10 p.m. Tuesday, yelling that Goodman’s old house was on fire. Davis didn’t believe him, at first, and ran to the window where she could see the flames eating away at 40 years worth of memories.

“You just stand there and you just watch it,” she said, “That’s all you can do, because you can’t stop that fire.”

Wednesday morning Davis picked through the charred pieces of those memories, looking for “little bits of life.” She found a few: a fur jacket, a set of Madame Alexander dolls, her own wedding dress and, somewhere in the boxes in the garage, tulip bulbs.

Davis says she doesn’t know if the bulbs are still viable, but says if they’re not, she’ll replace them.

“Lord willing, we will have these bulbs planted,” she said.

The cross that blooms every year in Goodman’s yard takes between 1,000 and 2,000 tulip or daffodil bulbs. And without fail, the blooms open just in time for Easter Sunday, Davis said. Davis is taking the resurrection message to heart, and says she’ll give the old yard, and house, new life.

“We just want to take something good from this,” she said, “we will rebuild this house.”