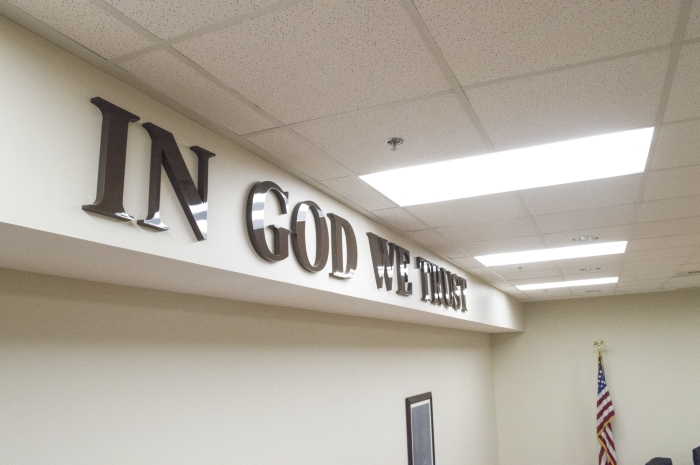 The U.S. Motto "In God We Trust" has been installed in China Grove Town Hall's meeting room. The exterior of the Rowan County Administration Building also bears the phrase. Josh Bergeron / Salisbury Post

Last month, China Grove completed installation of a display that reads “In God We Trust” and stretches across a large portion of the town board’s meeting room.

Town officials say the “In God We Trust” installation was placed in town hall to promote America’s national motto. In fact, Town Manager Ken Deal said he was approached by Davidson County-based U.S. Motto Action Committee about installing the motto on town hall. Deal said he thought the proposal was a good idea and presented it to the town board, which approved it without any fanfare.

Without public discussion, the China Grove Town Council in May passed a resolution in support of installing the motto. It passed as part of the consent agenda — used for items with unanimous agreement. Five months later, the phrase is the most immediately noticeable aspect upon entering the town council chambers.

China Grove Mayor Don Bringle said no members of town board expressed opposition to the idea.

“Ken approached the council about it being done, and the council was OK with it,” Bringle said. “We gave him the green light to proceed from that perspective.”

China Grove certainly isn’t the only municipality or government entity in Rowan County with the phrase on its walls. The Rowan County Administration Building bears “In God We Trust” at the top of its towering frame.

County commissioners approved placing the motto on the building in 2006. It came with significantly more discussion than in China Grove’s case.

“In God We Trust” also is displayed at the entrance to the U.S. Senate and above the speaker’s chair in the U.S. House.

Congress designated the words as the national motto in 1956.

In Davidson County, the words led to a lengthy lawsuit. It was dismissed once in 2004 when the suit was in U.S. District Court. A U.S. Appeals Court upheld the lower court’s decision.

“It was just an idea that Ken brought to us and we thought it was a good idea,” Bringle said.

Deal wasn’t immediately able to provide the total amount of town funds spent to install the motto in town hall. However, Deal said he would request a refund from the U.S. Motto Action Committee.  The Davidson County group paid for installation on the Rowan County Administration Building.