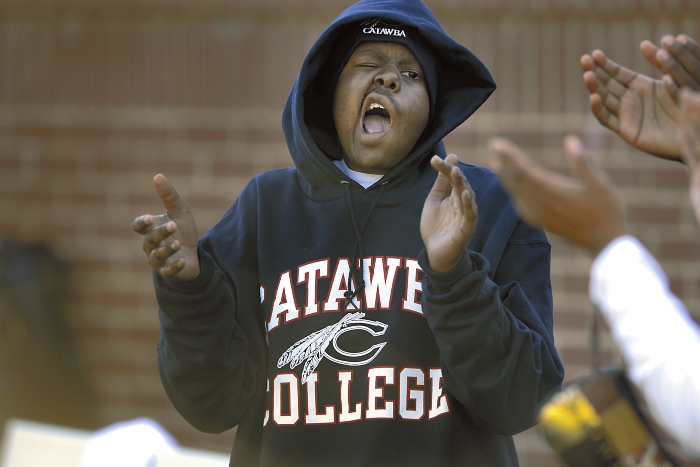 Salisbury High student Robert Gilmore, fighting cancer since he was 3, got to spend a week as the honorary coach for the Catawba College football team, working with Coach Curtis Walker. During the Catawba game against Lenior Rhyne, Gilmore cheered for Catawba from the sideline. Wayne Hinshaw/For the Salisbury Post

Robert Stephen Gilmore, the Catawba Indians’ Honorary Coach on Saturday, can take some of the credit for Catawba’s South Atlantic Conference victory, the Indians’ first since 2007.

Gilmore, a Salisbury High School senior battling cancer for the third time in his life, was on the sidelines for the game after spending the week with the team as it prepared for the contest against Lenoir-Rhyne.

In July of this year, the Rowan-Salisbury Board of Education presented its first ever Courage Award to Gilmore. He was named prom king by his classmates at Salisbury High last spring and has served as a manager of his school’s football team, the Salisbury High Hornets.

Gilmore is the son of Wendy Baskins and Travis Hairston, but this past week, he was one of Catawba’s own.

When officers step in: The role of school resource…