When officers step in: The role of school resource officers in Rowan 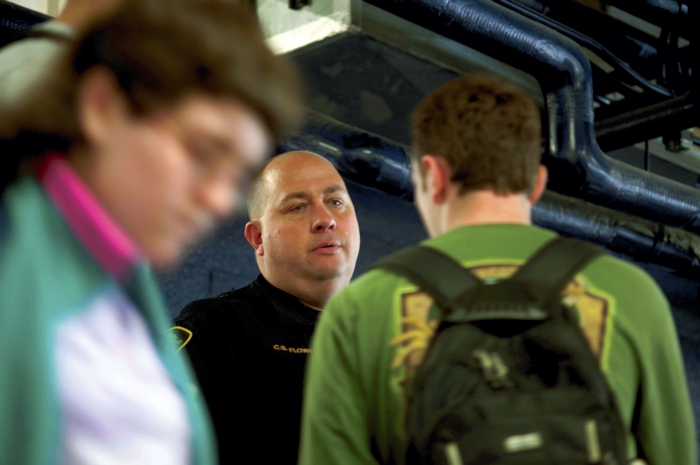 Students in the classroom recorded the incident on their phones and posted it on social media.

“Where was the school administration?”

Here in Rowan County, although there is some discretion concerning the way SROs deal with certain issues, there is a line between what teachers and administrators are supposed to handle and when a law enforcement officer needs to step in.

Rowan County Sheriff Kevin Auten said the primary mission of a school resource officer is to ensure the safety of students, staff and faculty.

“We shouldn’t be there to enforce skipping the line in the lunch room. I mean, that’s truly a school policy and a school issue,” he said.

Issues concerning school rules and regulations, including maintaining a safe and orderly classroom, are deferred to teachers and administration, according to a document provided by Auten. School resource officers are in schools to enforce criminal law.

Erdie said if a situation like the one in the video occurred at East Rowan, in which a student was refusing to leave a classroom, the administration and SRO would work together to solve the problem, but the SRO would not be the first person to step in.

“There’s never a situation, that I can think of, that would occur here that’s similar to that where we would not be together,” she said.

Erdie said the first thing administrators would have done to diffuse the situation was remove the other students from the classroom.

“Once the audience is removed, the student is less likely to continue to stand ground because they’re not having to save face,” she said.

Jordan Baker, assistant principal at East Rowan, said students sometimes act more defiantly when their pride is on the line.

“We can have a personal conversation with that student (because) now the audience is away,” he said.

Baker said East Rowan’s SRO, Deputy C.S. Flowers, might accompany administration when there is a problem but will stay out of the classroom if not initially needed.

“He’s not here to be the initial contact unless it’s necessary. Most of the time he’s here to support us,” he said.

Erdie said teachers are expected to handle day-to-day problems, but when things get out of hand, an administrator is called in.

“If a student is causing a disruption in the classroom in which other students’ learning is being impaired, they need to call an administrator,” she said.

When issues do escalate, SROs in Rowan County have the same arresting and other powers that any other sworn deputy or officer has, according to Auten. But Auten also said he would rather not have problems come to any arrests.

“Sometimes we are going to have to take enforcement action, but that’s really the last resort that we want to see,” he said. “We’d rather intervene in a way that we don’t have to do that.”

Auten said it’s not about arrest numbers. It is about developing relationships with students so that when problems occur, students can trust the officers to help.

“We don’t want to be a part of that school-to-prison pipeline,” Auten said.

As far as the incident in South Carolina, which ended up getting the school resource officer there fired, Auten said it looked like the officer overreacted to the student’s defiance.

“To oversimplify that one, two wrongs never make a right,” he said.

Erdie said if students see an official acting incorrectly, they should get in contact with another adult.

“I’ve told students if you see something that you don’t feel right about, come find one of us and let us know,” she said. “If you aren’t comfortable coming and talking to us, shoot us an email. We’ve always got our phones.”

Auten said he hopes there is a lesson to be learned from what happened.

“The whole goal of that? Something positive comes out of it,” he said. “How do we make it better? How do we make the system better?”