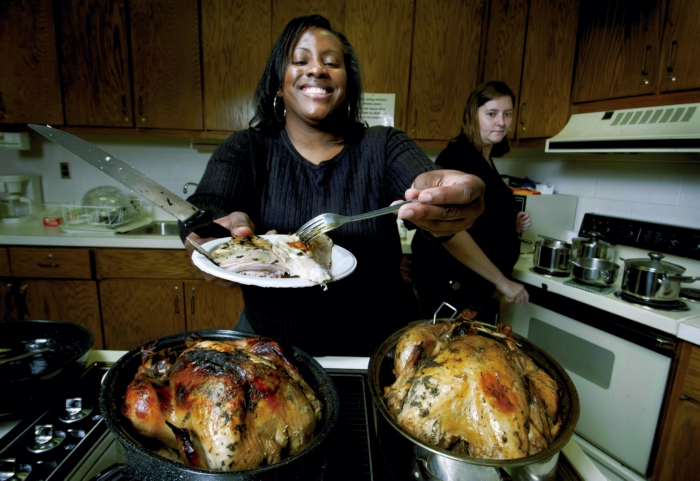 So, now both turkeys are out of the oven. They are both beautifully browned, juicy, tender and brined to perfection. Let the judging begin.

Now before we get to the results, here’s a brief background on how this all began — we started this turkey test last year, preparing our turkeys three different ways.

These were all good but not true comparisons, as they all were prepared so differently. This time we chose the same method, just different versions.

Both brines were similar in that they used herbs, fruit juices and lots of butter. However, their flavors were drastically different, one being more sweet and the other more savory, which is why a taste test was needed to choose a victor.

Using the entire staff at the Agriculture Building to serve as judges, they had the strenuous task of sampling the turkeys with and without the gravy and had to complete the dreaded judging sheet.

The competition was neck and neck almost the entire time without a clear leader in sight. After the final tallying and with only an 11 point lead, Danelle’s Citrus Thyme Brine won with 173 points to Toi’s 162. But Toi’s Apple Cider Gravy took first place. So now it’s up to you as a reader to decide which one will be first on your Thanksgiving table.

If you have any questions, concerns or suggestions for the next holiday contest please give Danelle Cutting or Toi Degree a call at 704-216-8970.