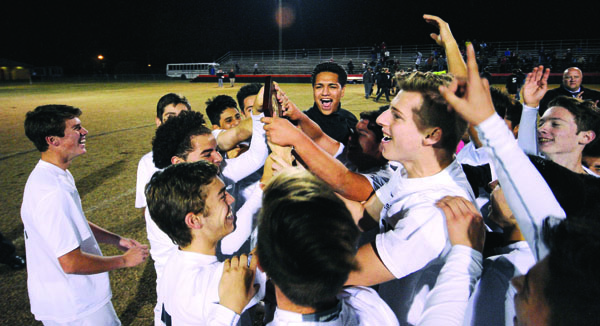 SALISBURY — Save the last dance for the Salisbury boys soccer team.

For the third time in five seasons, the Hornets will play for a 2A state title this weekend after steamrolling visiting Trinity, 6-0, in Tuesday’s West Regional championship match.

“It’s an awesome feeling,” senior Reilly Gokey said after Salisbury (26-0-2) received goals from six different players and won with surprising ease. “This is what we’ve been thinking about all season. It’s what we’ve played for — to win it all.”

“I remember playing in this game two years ago,” senior Christian Uribe said. “I started, but got injured 18 minutes in. Right then I remember thinking, ‘I’m coming back my senior year and playing the whole game.'”

He’ll get his chance after the Hornets, who played a 0-0 tie with Trinity on Aug. 24,  netted three goals in each half and collected their 24th consecutive win. No. 7 Trinity (20-6-1) had its 14-game winning streak halted.

“Nobody saw this coming,” Salisbury coach Matt Parrish said. “Trinity has been an underdog throughout the playoffs. They beat the No. 2 seed. They beat the defending state champion. They had won four straight one-goal games. How many teams can say they did that in the same run? To have to travel again and come to our place, it was a tall task.”

It was too tall for the guests. “Every team is different from its first game until the end of the season,” said Trinity coach Mike Sink. “But we felt like we had a good chance. I think our midfield just kind of laid back, didn’t punch back. It kind of disappeared.”

Salisbury didn’t. The Hornets opened the scoring just 3:35 into the match when junior Andrew Kalogeromitros fired a hard shot from the left side that slipped through keeper Trevor Bazen’s hands and spun into the net. “Andrew’s got a cannon of a left foot,” Salisbury’s Landon Goodman said. “The keeper got two hands on it but couldn’t hold it.”

Parrish called it “a gift,” while Uribe — the Rottweiler defender on Salisbury’s back line — believed the early goal was foretelling. “You get one like that,” he said, “and you start thinking that maybe they’re not ready for us.”

The match swung completely in Salisbury’s favor late in the first half when Uribe and freshman Bryan Garcia scored goals 65 seconds apart. Uribe converted passes from Goodman and teammate Joshua Lynch on a classic, tic-tac-toe play when he scored on a tap-in from the doorstep with 13:04 remaining in the half.

“That play was run to perfection,” Parrish said. “It’s very much a throwback to the Coach (Tom) Sexton days. That play has been run in some variation or another for years. And with a 65-goal scorer (Goodman), most people, when they see him line up over the ball they think he’s going to shoot. So we knew they’d be anticipating a shot — but, bing-bang-boom and Christian knocks it in the back of the net. That’s exactly how you draw it up on paper.”

Garcia made it 3-0 when he confiscated a loose ball across the middle and drilled a 15-yard shot over Bazen’s outstretched arms.

“That’s called a super-sub situation,” Parrish said. “You put a kid in and two minutes later he scores. This kid has done it before, produced in short minutes. That really took maybe the last bit of wind out of their sails.”

Goodman cemented the outcome when he blasted a 30-yard missile into the net early in the second half. “The team needed a little extra from me this game,” he later explained. By the time sophomore Melvin Bonilla and senior Jared Ramirez added second-chance goals, Trinity was a team with a blown transmission — it wasn’t going anywhere.

“The whole night surprised me, but they’ve got a great team,” Sink concluded. “I’d be surprised if they don’t win the title.”

NASHVILLE, Tenn. (AP) — Cam Newton was perfect for almost a half. It was more than enough to keep the... read more