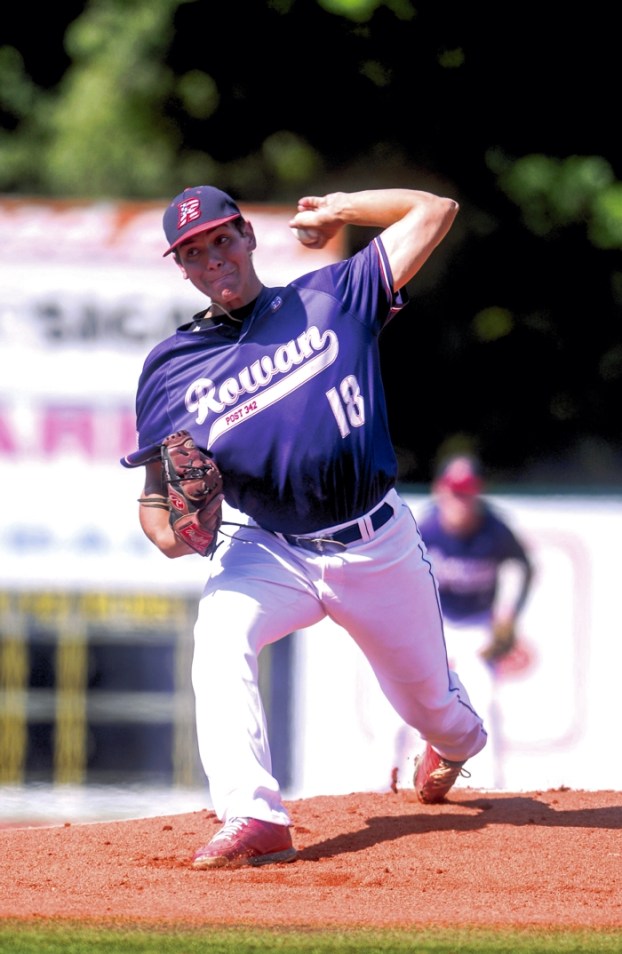 FAITH — Nice guys don’t always finish last.
Hunter Shepherd, who signed with Catawba’s baseball program last week, is athletic, strong and left-handed, but above all, he’s nice. Catawba baseball coach Jim Gantt calls him “the most respectful student-athlete we’ve ever recruited.”
“We’ve recruited a lot of good people, but he’s up there,” Gantt said. “This is a guy that will be a benefit to our program if he never hits a home run or wins a ballgame.”
That’s certainly true, but Gantt expects Shepherd, who starred for the Greater Cabarrus Homeschool Stallions and Rowan County American Legion, to hit quite a few homers and win quite a few games before his college career ends.
Shepherd had been recruited by larger schools, including UNC and North Carolina A&T, but Catawba, which played in the D-II national championship game last year, had a lot to offer, including a roster filled with Shepherd’s former Legion teammates. There’s also the Gantt Factor. Gantt was Shepherd’s Legion coach.
“Playing for Rowan Legion for two years, I got to know the coaches and players and I feel comfortable with them,” Shepherd said. “When I toured the Catawba campus, I knew this was where I wanted to be, and my family can see every home game. When I followed my heart, it wasn’t a hard decision to sign with Catawba.”
Homeschool Stallions coach Chris Lankford has coached Shepherd since he was a seventh-grader and wasn’t surprised by his decision to sign with Catawba. He’s the Stallions’ first college signee, although more will be upcoming.
“Hunter has a lot of tools and he definitely has Division I ability,” Lankford said. “Catawba may be Division II, but it’s a program that’s second to none and it’s a program that competes for championships every year. Hunter understands that, and he’s a family-oriented guy who is excited about the chance to stay home and play ball right here in his hometown.”
Lankford said Shepherd’s upside is tremendous. He’s gained 6 mph on his fastball since last spring, and he has excellent hands and footwork at first base. He has great power potential. One of his homers last summer was a blast that cleared the 390-foot, right-field fence at South Rowan.
“Hunter is a tremendous person, a trustworthy kid with a great work ethic,” Lankford said. “He does schoolwork and he plays ball. He hunts, he fishes, and he works construction jobs with his dad. That’s about it. There’s no risk at all involved in signing him.”
The first baseman/pitcher has a good chance to be a two-way player for the Indians, although he most likely will be a pitcher/designated hitter. Catawba has former Salisbury star Chance Bowden, one of the SAC’s top freshmen last season, to play first base.
Shepherd and Bowden are friends and former Legion teammates, and Bowden has worked with Shepherd quite a bit. Bowden is a great first baseman.
“It’s not like Hunter doesn’t know Chance is here,” Gantt said. “Hunter will hit for us, he’ll pitch for us, and he’ll play some first base.”
Shepherd batted .531 with six homers and 51 RBIs for the Homeschool Stallions last spring. He was 4-4 on the mound with a 3.26 ERA and 41 strikeouts in 43 innings. He led the Stallions to a 32-9 record and the Homeschool World Series. Shepherd had 11 hits in five World Series games.
A two-way player for Rowan Legion’s state-championship team last summer. Shepherd batted .348 with two homers and 26 RBIs. He was 5-1 on the mound.
“There were a lot of good memories from last year, but the state championship was the best,” Shepherd said. “I’ve got one more year with the Stallions. It’s going to be a lot of fun and we’re hoping to win a state championship.”
Catawba has a ton of returning players, so this recruiting class will be a small one. It will start with Shepherd, West Rowan lefty Bryan Ketchie, Robinson infielder Jackson Raper and Parkwood infielder JT Dunn.