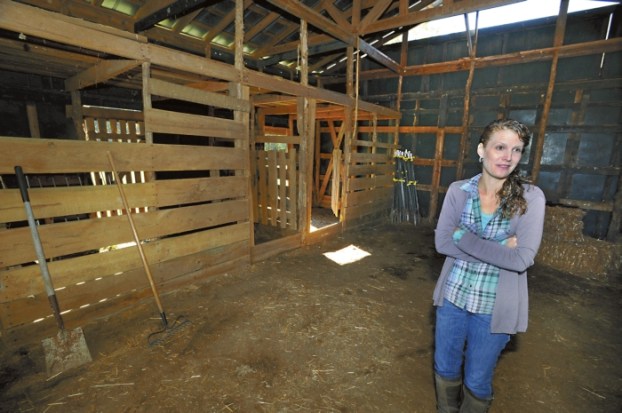 Wayne Hinshaw/For the Salisbury Post Janna Griggs discusses the needs of the Saving Grace Farm therapeutic riding program, which is relocating to acreage at her home on Jackson Road in eastern Rowan County. She stands inside the barn that will need to be renovated to accommodate four horses.

The morning is chilly but the sun shines brightly across the gently rolling pasture land. Beneath the trees sits an old barn. It’s getting a bit of a facelift, preparing for new inhabitants.

Welcome to the new location of Saving Grace Farm. The therapeutic riding facility is moving to the home of Janna Griggs, who lives with her family in eastern Rowan County.

Griggs, the organization’s executive director, and her board of directors hope to open at the new location by Feb. 1. But first, they have to raise between $5,000 and $10,000 to equip the facility and build an arena.

Griggs, 32, and her husband, Toby, 30, and their two children, Grayson, 6, and Baylee, 4, recently moved to a new home behind his grandfather’s house. The acreage in between seemed a perfect place for Saving Grace.

“It’s been a whirlwind,” Griggs admits. “We’re just getting used to everything here.”

Griggs says she’s been a horse lover since she was 2. If “horsie” wasn’t her first word, it was among the first.

“I played with horses more than dolls,” says Griggs, who got her first horse at age 14.

She thought she wanted to be a vet, but burned out on school. She decided she could do something else, with horses on the side.

She planned to study graphic design, a two-year degree program, until she got a flyer from St. Andrews College about its therapeutic riding program.

The four-year degree appealed more to her parents, Griggs says. “My family is all about helping people, and they were all for it. It kinda fell in my lap. It was a win-win situation. I’d get a bachelor’s degree, and I could help people.”

And she could be around horses.

Her degree is in therapeutic horsemanship, but Griggs is quick to point out she is not a therapist.

While she was in college, she began helping Jill Hoben, the founder of Saving Grace. She later became its part-time program director, being employed there when the economy allowed.

Hoben moved out of town in 2014, and Saving Grace’s board asked Griggs to become executive director. The new owners of the property agreed to let the program stay for a year, to see how things would go.

“It’s a lot of responsibility,” Griggs acknowledges, and it soon became apparent to both parties that the program needed to find a new home.

“My husband and I talked at length about it, and the board decided if I were willing, we would move Saving Grace Farm to our home,” she says.

“Our intention is to give the program a fresh perspective in a new environment,” says board member Lisa Cartner. “We agreed the winter months would be the ideal time frame to reorganize the program and begin the spring season with a new and improved program for the community. We appreciate the past support of the community and look forward to a continued partnership in building the programs within our organization.”

Griggs needs money and manpower to make the new location a reality. Griggs has scheduled work days to prepare the barn and the property. The program must follow guidelines from PATH International, through which it receives its certification. Griggs and her husband are running power to the barn, and building a feed room with the help of family and friends.

Griggs is developing a lease agreement for the non-profit organization, in which it will receive credit for infrastructure improvements. Through these grassroots efforts, Saving Grace is making a request to the community, both for funds and for any local organizations such as Boy Scout groups who are looking for service projects.

“We’re hoping people will come forward to offer their support,” Griggs says. “We have some capital, but we’re trying not to drain our operations budget.”

Griggs says of the move, “It’s basically like we’re starting from scratch, and Feb. 1 will be here sooner than I probably think.”

Griggs plans to create a 60-foot by 80-foot arena with a carport-type cover. In the past, Vulcan has donated gravel for the base or footing of the arena, and she hopes the company will provide it to the new location as well. She’d also love to have the grading for the arena donated. Additionally, she’ll have to fence the pasture area.

Saving Grace serves a wide population, from students with special needs to veterans from the VA who have post-traumatic stress disorder. This year, the program has served 150 people.

“We absolutely love it,” says Jenna, a local mom whose son, Darwin, 4, has autism.

“There are not enough services here for children with autism,” she says. “We started him at age 3. He said ‘Mommy’ for the first time at his first lesson. It’s really gotten him talking. He is showing empathy to the horses. He absolutely loves going. Once they’ve moved, we’re gonna start back. He’s already asking about the horses.”

“We would love to get more individuals involved and volunteers,” Griggs says.

Carrie Maggard and her daughter, Tessa, began volunteering with the program in August 2014.

“We have a heart for the veterans,” says Maggard, whose husband served in the Marines. “We’d like to see the program continue.”

Maggard and her daughter set up the equipment and prepare the horses before the veterans visit. Maggard homeschools her daughter, so their schedule during the daytime is flexible, she says.

“We get to help one-on-one with the veterans,” she says. “It gives them a chance to get off the unit, and we sit and talk and visit with them.”

When the veterans visit, Griggs takes them through a simple connection exercise with her horse, Dakota.

“They have to move the horse around the arena,” she says. “If the horse realizes you’re the leader, it will follow you.”

Griggs has watched veterans’ confidence grow as they work with the horse.

“It was really neat,” she says.

When construction is complete at the barn, she’ll have room for two or three other horses. She’d like to use the horses for classes in exchange for board.

“This is probably the best time of the year for us to move,” she says, as special-needs classes don’t take place when the weather is cold. The veterans’ program, however, is year-round.

Maggard says of the new location, “There’s a lot of work to be done, but we’re very excited.”

“It’s a little scary, but it’s exciting at the same time,” she says.

Saving Grace Farm is selling T-shirts to help offset the price of fencing and other expenses. To order, visit www.booster.com/helpsavinggracekeepmovingforward.

For more details on Saving Grace Farm, contact Janna Griggs at 704-798-5955 or janna@savinggracefarm.com.

By Hugh Fisher hugh.fisher@salisburypost.com Outside the Faithful Friends Animal Sanctuary on Saturday, a group of friends gathered to remember a... read more